Do you remember what the first week of school was like for you? As new students arrive on your campus this fall, you will want to be ready to meet and greet them. Here are some great ideas from InterVarsity chapters that successfully welcomed new students to their campuses last fall.

Free sodas
Moving into the dorms creates a lot of thirsty people, so the InterVarsity students at the University of Nevada-Reno handed out hundreds of sodas and helped new students move in. They met lots of students arriving with their stuff on campus who appreciated the extra help carrying and toting. The chapter has been doing this for nine years, and every year there are more students from the chapter volunteering to hand out sodas and help newcomers move in.

World’s largest ice cream sundae
First, get 40 feet of rain gutters in a long row. Then line with aluminum foil. Next scoop some ice cream, add assorted toppings, and dig in! The “World’s Largest Ice Cream Sundae” was an NSO hit at the University of Wisconsin-Eau Claire. It was held at a student’s home, right across the street from campus.

Watermelon
The new InterVarsity chapter at College of Charleston (SC) held a “Watermelon Party” during the first weekend back on campus. They received permission from the school to have the party in a small yard between the two largest freshmen dorms and hung up lots of posters around campus. Fifteen watermelons were donated by a local church. They set up a screen with a projector and played a clip of move-in scenes from shows or movies such as Gilmore Girls, Revenge of the Nerds, Friends, etc. Several upperclassmen were in charge of cutting up and serving watermelon while other returning students just mingled and met freshmen. More than 125 students showed up. Some just picked up watermelon and left, while others stayed the whole time and met a lot of other students in the InterVarsity community. “Many students who are now involved in our fellowship still talk about the Watermelon Party as key to becoming involved in the group,” says staff member Amy Weber. 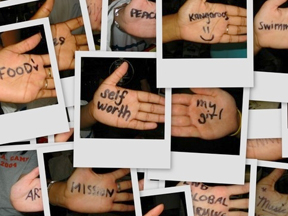 Handy question
“What are you passionate about?” That was the question on the large poster at the InterVarsity tables on several campuses, including California State University-Northridge and San Diego City College. Students walking by were asked to write their passion on their hand, and then a picture was taken and pasted on the board. The display was an attention grabber.

Sexy pizza
At the University of Houston, the “Sexy Pizza” event offered students free pizza and an opportunity to participate in a 30-minute group discussion about what the Bible has to say about sex. Last fall, more than 150 students showed up for free pizza, and about half stayed for the optional discussion. Students were given note cards and were encouraged to write any questions they had about sex as it relates to the Bible. The lively and frank group discussion was led by staffer Josh Howell. It was sometimes a challenge dealing with crude comments but, he says, “I try to keep the tone positive and loving, while still presenting truth.”

Burger bash
The volunteer cooks at Burger Bash 2006 were flipping burgers in 100 degree heat for the 500 Aggie freshmen accepting the chapter’s offer of free food at Texas A&M. Two large InterVarsity banners announced the hosts — all wearing red T-shirts and warmly greeting and chatting with the guests. As students waited in line, they walked past two poster boards and were asked to consider where evil had invaded their worlds, and to offer solutions to that evil. At one point Andrew Schuff, the chapter president, called out a “Howdy,” a miraculous word that makes every Aggie immediately grow quiet. In his loudest voice, he invited everyone to a relationship with Jesus. He presented the gospel in a way that was fearless, clear, compelling and uncompromising. Afterward, one freshman said, “Thanks for helping us transition to college.”

Green chile ice cream
The chapter at the University of New Mexico sponsored a free homemade ice cream party. Among the ten different flavors of ice cream were vanilla, peach, toasted coconut, and green chile. There were about 100 students who were fed, and 70 stuck around for volleyball, ultimate Frisbee, and just hanging out.

Women + chocolate, men + video games
Let’s admit it — men and women are different. So why not plan some NSO activities to reflect this? At Purdue University (IN), the chapter planned a women’s chocolate party and a men’s video tourney on the same evening. The guys enjoyed hanging out together while the women indulged in two different kinds of chocolate fondue, dipping fruit, pretzels, marshmallows and other tasty treats. They divided into small groups to play a short trivia game on facts and history related to chocolate. Another game they played involved forming as many words as possible using the letters in the word “chocolate.” Each of the women also received a party-favor bag with a variety of chocolate candies. “The women who came enjoyed the party and the chocolate,” said staffer Karen Dinius, “and it was a good time to get to know new students. We’d love to do it again.” (The guys? Well, the guys enjoyed hanging out together playing video games — ’nuff said.)

All it takes is pizza
New Mexico Tech is a unique campus. Students are self-confessed tech addicts and spend much of their days on the computer and studying physics, chemistry and biology. The challenge at Tech is to get the students out of their rooms and to a small-group or large-group meeting. Social events on the weekends do not fare so well because many students go home to neighboring cities. One solution the chapter tried was providing free pizza at every large-group meeting of the fall semester. They knew that free food was a large draw on their small campus of 1200 students where the cafeteria food is often tiresome.

Week Zero
Students love to eat, so the InterVarsity group at the University of California-San Diego planned a lot of food for a lot of people. They grilled hot dogs and hamburgers for three hours straight at a free barbecue — and fed more than 1,000 students! They also had a luau party and bonfire at the beach for 200 students. All that hard work of welcoming new students paid off when more than 480 students showed up for the first large-group meeting. When an invitation to faith was given, more than fifty of those students stood in response. Visit Week Zero at UCSD through this YouTube video.

Watch where you’re sitting (or, thanks for the tip)
The Activities Fair at Lawrence University (WI) found InterVarsity students seated right next to the “free thinkers” who were giving away bumper stickers that read, “Imagine a world without religion.” The chapter’s first meeting was a “kegger” with free root beer on tap (locally brewed) and ice cream, a perennial favorite activity. (One time, when a chapter leader was wheeling a root beer keg across campus, some concerned fraternity guys stopped her with experienced advice. “Oh no, not like that — they’ll catch you for sure!” they warned her. “You have to put the keg in the trunk of your car and then slip it in when no one is looking.”)

The InterVarsity students borrowed the “kegger” idea from the chapter at the Milwaukee School of Engineering (WI) which has been doing this for years. Read their story.

Surveys: What do you think?
InterVarsity chapter members at Northeastern Illinois University took a survey of students about their favorite TV shows and radio stations. They also asked the students if they were interested in exploring faith, God, the Bible, or Christian community. More than half said yes, and about one-quarter gave their contact info. “We could have done a better job with follow-up,” said staffer Beth Hedges, “but I was surprised at the level of interest from those who filled out the questionnaire.” Download the survey (Microsoft Word file).

Speaking of follow-up …
At a small school like Lawrence University (WI), people come and get involved by personal invitation and relationships. Last fall, the small-group leaders set ambitious goals to personally meet with everyone in their small groups, usually over lunch. It was a real stretch for some of the less outgoing small-group leaders, but very rewarding. Sarah was one of those student leaders who shares her story:

“Last fall I was a small group leader for the first time and I was nervous about reaching out to new members in the fellowship. I am not naturally outgoing and I felt inexperienced, but I wanted to convey the love of Christ to new members because I know that’s what binds believers together. I met with members of my small group over lunch and found that this was a natural way to show them that I genuinely care about them and it strengthened our relationships. I feel that it also encouraged them to keep walking with God in the midst of a secular college environment, and our fellowship together is an important part of the Christian life. As I stepped out to show the love of Christ to new members, God blessed me with a beautiful small group. Meeting with them is one of the highlights of my week!”

More ideas
See more ideas for NSO from previous years. New Student Outreach and Beyond points to some further resources for NSO.

What has your chapter done for NSO that has worked well on your campus? Share your ideas below.