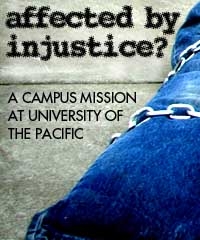 “Have you been affected?” I asked students walking by our display of injustice issues at the University of the Pacific in Stockton, CA. I was surprised by how many students were personally affected by abuse, racism or poverty. And I was amazed at the many open doors to discuss spiritual solutions to these painful issues.

I’m a student at UC Davis, but I jumped at the chance to join my UOP brothers and sisters to engage their campus in evangelism from Feb. 21-23, 2007. They planned a variety of ways to share God’s love for humanity and justice through creative interactions, cleaning the dorms and hosting a hunger project.

I went to partner with the UOP chapter when they invited other InterVarsity students in the region to participate in this three-day event, which is why it was called the UOP Invitational. We recently had a similar event on my campus at UC Davis, and also at the University of Nevada, Reno.

Six of us drove two hours on I-80 from Davis to Stockton: Mari, Katye, Zach, Erin, Christie and me. Though I looked forward to meeting students, I was nervous from the beginning. I knew I should not worry, but how would they respond to our message? How do I explain to them that I don’t even go to UOP?

To engage students in spiritual conversations, the UOP chapter set up interactive art stations on the campus. The day was rainy and freezing. More dauntingly, our location had a thin traffic of students. I was at a station that represented various forms of evil — a black display board with different categories that included eating disorders, poverty, suicide, racism, sexism, divorce, incest and abuse.

Standing by the board, I grabbed the attention of students who walked past our display by asking them, “Have you been affected?”

Most people were caught off-guard by this question. “Say what?” or “Affected by what?” they asked, with questioning faces.

After introductions, I invited the students to look at the display board and asked them if they or someone close to them had been a victim of any of the categories represented on the board. If they had, I offered stickers for participants to place on the display in those categories. I found out that most people were not only fond of stickers, but they were also more than willing to participate in the interactive art. It was nevertheless painful to see the majority of students use more than five stickers on the board; some even asked for more stickers.

Two follow-up questions were, “What do you think is the source of evil?” and “Do you think there’s any solution, perhaps a spiritual solution, to the evil?”

After listening to their explanations, I asked them if they would like to hear about God’s solution. To my surprise, most people said yes. I then asked them if they were interested in filling out a contact card to join a GIG (God Investigation Group).

Right in front of my eyes, one spiritual conversation after another took place. One student said her parents believed in shamanism, but their belief neither satisfied nor convinced her. Another said she was searching for a new religion; she tried to be a Buddhist but found Buddhism unable to provide a solution to stop evil in the world. They all decided to sign up for a GIG!

The second stage of the UOP Invitational was a dorm cleanup. There was something exciting about cleaning people’s dorms together, equipped with paper towels and a vacuum. The purpose of this activity was to serve students and to share about Jesus’ love with them. I teamed up with two UOP students, Ben and Bryant. Ben was the extravert on our team; he gallantly broke the ice between the dorm residents and us. Bryant and I, on the other hand, were a little bit more nervous and shy. After cleaning the men’s floor, Ben had to leave us. “Uh-oh!” I said to Bryant as we apprehensively climbed the stairs to the women’s floor. It turned out to be deserted.

“See, every time I knock, no one answers,” Bryant said.

I did not know what to do, but urged him to keep knocking. At the next door, a female student answered. Blasting ‘N Sync in the background, Jenna was the first and only person who was willing to talk to us on her floor. After inquiring about her major and chatting, Bryant suddenly asked, “What’s your religious background?” This question opened up the entire conversation. She told us she about her Catholic upbringing and said she would like to join an on-campus Bible study! We were both at a loss for words.

The next evening, we served a broken bread meal consisting of a corn-soy porridge that is consumed by AIDS patients in third world nations. We did this to give students a taste of poverty and AIDS worldwide. Steve, a UOP staff worker, gave a talk on God’s heart for justice and the hope Jesus offers us. We had one student receive God that night.

I was tired and scared when I went to UOP, but I was filled with awe and joy when I returned. I thought I was serving others by participating in the Invitational, but God, who has mercy on the underserved, stunned me by his presence at the art display station and in the dorms. The invitational was not just our effort to reach the unchurched, but God’s gracious invitation to us to join his love for the world.

We enjoyed the hospitality of the UOP students who generously hosted us from Wednesday to Friday. The night we left for home, I realized that I would miss the students who I would probably never meet again, who shared a vulnerable side of their search for God with me. My heart aches for them, but I’m thankful for a God who loves them more than I do.