After the diploma: one graduate's journey 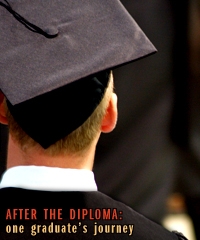 How many times have you heard the question: “So, what are you going to do when you graduate?” Whether you have a good answer — or don’t — life after college is going to be different. We’re revisiting this 2007 interview with Chad Riley, a graduate who took what he learned in college — including his passion to serve God and others — and is making a difference in the world.

Here’s what Chad had to say after he completed his second year with Teach For America. “God has totally opened up my world and has taken me on an immense journey since graduation,” Chad summarizes in an interview for FLUX, a free publication for recent graduates. He knows that the transition from college to career is filled with countless adjustments, and he shares some of them with us.

FLUX: How were you involved with InterVarsity as a student?

Chad: I attended DePauw University in Greencastle, Indiana. I was very active in the InterVarsity group. I led a small group and was on the leadership team for several years, and I graduated with a degree in English.

FLUX: What have you been doing since you graduated?

Chad: For the last two years, I’ve been working for Teach for America. Their purpose is to eliminate educational inequality in schools across the country. They take college graduates from all academic backgrounds and place them in low-income urban and rural schools as full-time, paid teachers. It’s a growing, creative effort to close the education gap.

FLUX: Do you think what you’re doing is making a difference?

Chad: I hope so. I spent my first year working as a recruiter in New York City, talking with top students about committing two years after they graduate and investing in teaching kids with limited educational opportunities. This year I’m an English teacher at a junior high school in Oakland, California.

It has been an interesting and exciting time. But I keep going, in spite of the obstacles, because none of my life decisions have been made without serious prayer and deliberation. I know the challenges are worth it, because I’ve seen my students blossoming in and out of the classroom.

FLUX: What was the transition from college like for you?

Chad: When I moved from school in Indiana to a job in New York City, it was hard living so far away from my family. We are very close. They helped me make the move, find an apartment, and get settled, but then I was truly on my own for the first time in my life. I had a lot to learn, including navigating my way through the city, but that process got easier with time.

Then, last year, I took a teaching position and moved across the country to Oakland, California. There were more differences than I expected — in geography, community, and culture. Even my brain chemistry was different, and I experienced depression for the first time in my life. It didn’t help that my roommate was gone for the first month. I no longer had the excitement of New York City or the camaraderie of like-minded friends. I was even more geographically separated from my family. My teacher-training was in south-central Los Angeles, and then I began the school year in Oakland. Suddenly I had over one-hundred students who depended on me for instruction and attention, so it was very draining.

FLUX: How did you cope with all the changes in your life?

Chad: In New York City my job was very challenging, but through it I met dozens of incredibly passionate young people with interests that mirrored mine. We would find ways to de-stress together, whether it was a Wednesday morning breakfast at the Tick Tock Diner or a Thursday night karaoke session at the Blarney Stone. Sometimes we’d just head into the city to watch a movie or eat in a restaurant in a new area we hadn’t visited before.

I also found myself praying constantly during the commute to and from the office in Manhattan. Since I lived alone, I had an abundance of time for spiritual growth and reflecting on the inspiration I found in the Bible. I also had a lot of time to explore the city — there were so many great things to see! I think my one year in New York was a huge educational experience — like four years of college.

This year, my church is very important to me. My network of friends is extremely supportive, and I am in touch with my family members by phone every day. Community is everything to me, and I know that my involvement in a faith community outside of the workplace is instrumental in my ability to connect with students and staff at my job.

FLUX: Is life after college different from what you expected?

Chad: I feel as though I’m living like one of the characters in the television show ‘Lost’ — I can discern the pieces of a puzzle that represent who I am and what I’m supposed to do in the world, but I can’t see the whole picture yet. And I won’t for a while. It’s much different from the idea I had in high school, and as an undergrad, that there was a presupposed pathway I should try to carve out for myself.

God has totally opened up my world and has taken me on an immense journey since graduation, and so far I can’t see any signs of stopping in the near future. That settled-down lifestyle I yearned for in college is a lot more distant than I expected, but I wouldn’t trade any of my experiences, because they’ve shaped me in ways I never could have accessed if I had settled.

FLUX: Have your experiences in InterVarsity affected your career decisions in any way?

Chad: Definitely. During my senior year, the leadership team of our chapter really started to focus on issues of social justice in the world. The Lord compels us to examine the conditions of our fellow Christians around the world. As I have become more deeply invested in my work with Teach For America, I have realized that many of the same needs we see overseas apply within our own national borders. InterVarsity helped me to recognize the needs we have in our own country, and that realization opened me up to doing some amazing things that I believe will have a huge impact on the lives of my students here in Oakland.

InterVarsity also taught me some things that have helped in my day-to-day interactions on the job. After my sophomore year, at a week-long training camp, an InterVarsity staff member laid out the issue: Do we submit only to God, or are we accountable to other members of the body of Christ? It might be good to say that our spiritual authority comes from God alone, but there has to be a bigger connection with the larger Christian community. Understanding this has been helpful as I work in the school system. I realize that being a renegade won’t get me where I ultimately want to go. As I look at the bigger picture, I also understand that when my supervisor asks me to do something that I don’t like, it’s not personal; it’s often simply the result of a broken system we’re obligated to work within.

FLUX: How has your involvement in InterVarsity prepared you for your life after school?

Chad: I often imagine myself clutching at the Father’s pant legs, as a small child will do with his parents. There is an intimacy in our interactions that gets me through the trials of the day, and I hunger and thirst after that connection. InterVarsity helped me to understand and access that intimate connection with the Lord, and my work as a teacher has spurred me into putting that bedrock solidity of my faith at the center of what I do and how I live my life.

FLUX: How have you filled the need for community since graduation?

Chad: I have become involved in a missions publication at my church in Oakland. I also serve as a volunteer with the youth ministry of another church. With so many ministry connections, it is easy to stay involved with people whose drive to serve the Lord encourages me to press on in my everyday efforts.

FLUX: How do you see God using you in your current circumstances?

Chad: I asked my friends at church to pray for my students, and there is a noticeable change in the classroom behavior. I have seen God at work in specific situations. Even though I’m limited as to what I can say in the classroom, some students have found out that I am a Christian and that has made a difference. I have a bracelet that says PUSH (Pray Until Something Happens). After I had been teaching awhile, I wore the bracelet and some of the students asked me what it meant. When I told them, they said, “Oh, so you’re a Christian?” I responded, “Not necessarily, because many other people pray, but yes, I am a Christian.” Knowing this has given the students a more holistic view of who I am, more than just the teacher.

FLUX: Do you have any advice for new graduates?

Chad: Don’t close yourself off to new possibilities. God might be taking you beyond the scope of your biggest dreams and deepest desires.

This interview was originally posted in May, 2007.

What advice would you give graduates? Share your comments below.

For additional resources, contact InterVarsity’s Alumni Department. You can order the free publication, FLUX, and additional material for recent graduates.