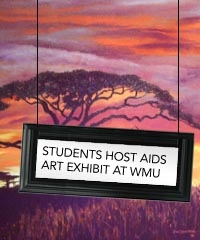 As an art major at Western Michigan University, I was tired of people asking me, “So, what are you going to do with it?” Truthfully, I didn’t know, and I often wondered if my art had any greater purpose or value. Then the Lord gave me a very big dream of using art to raise money for AIDS relief in Africa. I saw how an art exhibit could change things: in the world, in my art department — and in me.

It was in the middle of my junior year as an art major when I heard someone say, “Much of the world doesn’t recognize art as a powerful agent of change, but art truly has the power to transform and influence people.” The speaker was Dick Ryan, InterVarsity staff specialist in the arts. I was at an arts seminar at an Urbana Student Missions Conference and Dick’s point was clear: when artists discover their calling, they can change the world.

There was a skeptical part of me that thought, Really, Dick? I mean, honestly, a piece of art can’t feed hungry people; it doesn’t put bread on the table. Art can’t cure cancer; it can’t build a house. Art can’t supply the daily needs of people. I wanted to believe him, but my experience as a performance-driven art student left me doubtful.

Now I know that Dick was right. I saw it happen through an art exhibit I organized that raised awareness and money for those affected by AIDS in Africa. But the changes that happened weren’t just on another continent; I saw God bring about significant changes in my art department and in many of my fellow art students. Together we realized that we can make a difference in the world as artists — and it’s a thrilling discovery!

On a Friday night in early April, more than 400 people attended our African AIDS art exhibit and silent auction, buying artwork donated by my fellow art students. Powerful African drums resonated through the gallery space as dancers moved rhythmically throughout the room. Poetry and drama cut deep into the serious issues surrounding the AIDS epidemic, and the visual art sparked hope and contemplation in the viewers. When the auction bids were final on the sold artwork, we learned we had raised almost $2,000 for AIDS relief. It was a huge success!

Since I was the main organizer, some people asked me what my favorite part was. When I look back, it wasn’t the show itself that was most memorable. It was the journey through which God led me that revealed to me the greatness of his power and faithfulness.

After months of planning, preparation and risk-taking, I have learned one crucial and beautiful thing: God doesn’t need us. It is out of his great love that he chooses to use us, and he gives us the privilege to participate with him in making an impact on the world. Through this experience I have seen God’s power manifested in ways I have never before encountered. For the first time I experienced what true, risky faith looked like — the type of faith that didn’t rely on my good leadership, or my organizational skills, or even my artistic ability. It was faith that required me to say, “Jesus, if you don’t show up in this event, I’m going to fall flat on my face.” But Jesus did show up, over and over again.

When I was at Urbana 06, the Lord burdened my heart for people suffering from the AIDS epidemic in Africa. When I heard about the vast numbers of people affected, and the depth and breadth of its damage, I wondered what I — only one person — could possibly do that would change anything.

Then the Lord gave me a vision to create an art exhibit that would raise awareness of the AIDS epidemic and move others to respond. This vision was definitely bigger than me, and I filed it away as a “maybe someday” dream.

A year later, the Lord gently spoke to me, reminding of that vision, and I knew it was time. It was a hopeless feeling — I was already so busy! I had fifteen credits and was preparing for graduation, in addition to being on the InterVarsity leadership team. Plus, it was a very hard season in my life. I knew that if I pursued this mission, it was quite possible for the show to completely flop — after I’d burned myself out with the work it required.

I had no idea where to begin, and no understanding of how to curate an exhibit. I didn’t have any ideas about where to hold it, and I had serious doubts about getting people to create art pieces for the show.

Soon the stress led to an emotional meltdown and I seriously contemplated giving up on the idea. That very day, a friend called me and encouraged me to keep pressing into it, and I continued forward in obedience to the Lord’s call. Another person who encouraged me was Dave Biskie, my staff worker, who saw that I had already spent several years pursuing excellence in both my art and my relationships in the classroom. He told me that the trust I had built with people in my art department provided a solid foundation for this ambitious project.

The first step was to go into the art classes and invite art students at WMU to create pieces for the show. I was incredibly anxious, thinking, These students are really busy … who’s gonna sign up for a show? And do people in our art department even care for social issues like this?

When I walked into the first class, I prayed, “Lord, if no one signs up, can we just call it quits?” To my surprise, twelve students signed up in the first class I visited — I couldn’t quit now!

As I continued to take each step forward, the Lord responded with 100 steps forward, and it was a beautiful partnership with him. For example, when I was looking for a place to hold the show, my parents visited that weekend and stayed at a bed and breakfast that also had gallery space and often hosted benefits.

Going out on a limb, I emailed the owner, who responded, “How fortuitous that you happened to ask about doing a show because just today I was wondering if we could get a show together quickly that highlighted a social issue.” So we planned our show for one of the most sought-after places in Kalamazoo! The generous owners have a vision to use Henderson Castle as a space for artists to express their gifts for positive change in the world.

The Lord provided other volunteers who heard about the show and thought it was a great idea. Out of the blue, three female students contacted me separately and asked how they could help. Each one took on a major role for the event and coordinated many of the details. The president of the Campus Activities Board heard about it through her roommate and offered to advertise to the whole campus. Soon there was a buzz on campus about the event.

Professors were also encouraging, although perhaps skeptical at first. One professor wanted to discuss my vision for the show and grilled me with questions that I didn’t yet have answers for. After numerous “I don’t know” answers, I felt overwhelmed. Then he asked, “So, what is it that compels you to do this?”

I responded by saying that I didn’t have all the answers to his questions or specific details, but I told him, “All I know is that this is something I feel that God is asking me to do, and I’m trusting that he’ll figure out all the details.”

That response was enough for him and he said, “Well, okay then, I’m going to assign this to my students.” There were at least eight pieces in the show from his students.

I got so many phone calls from artists who heard about the show and asked if they could make a piece for it. Suddenly artists who normally stayed in their secluded studios were working together to create something bigger than themselves — and they were enjoying it! As more and more people volunteered to help, I noticed that our common mission was forming community in the art department.

One art student, Catherine Campbell, was deeply impacted by how the exhibit brought out the goodness in people. “It’s contagious wanting to help others,” she said.

Through this show, the Lord opened doors in the art department at Western — a department notoriously closed to Christian ideas. By building relationships with students and faculty, hearts began to open to hear what God was doing. I knew that we were preparing more than an art show. It wasn’t just about reaching out to those suffering in Africa — the Lord wanted to reach the artists involved and encourage them in the power of their work.

A week after the show we had a celebration and debriefing discussion group to talk about the impact of the show and the possibility of similar events in the future. The group was full of energy and excitement as we talked about our dreams of helping others and creating social change through artwork. In addition to visual art, our future vision included music, poetry, dance and drama.

Again I remembered Dick Ryan’s statement that when artists discover their calling, it can change the world. From this one exhibit, God moved through art and people to create change and influence on various levels:

Art has a powerful effect to speak into the parts of people that go deeper than just physical needs. Jesus talked about the deeper things in us that are eternal — our soul needs. This deep need is where change happens and the hunger and thirst of our souls is satisfied. Art speaks to these things. Art communicates with the hurts of the world. Once we realize this about art, it is evident to see how the Lord can use the arts as a tool to bring hope all over the world.