You're asking me to be a leader? 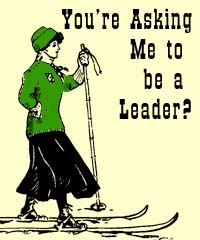 In the years since my chapter took its first risk on me as a Christian leader, I’ve often stopped to consider the insane ramifications of their trust. I felt myself to be one of the most notorious sinners in the chapter. My dating patterns and my loud mouth made me the barely tolerated bad boy of the group. So the invitation to join our chapter’s “exec” caught me a bit by surprise. What I didn’t know at the time (but my older, wiser staff worker probably did), was that my real sins were not these obvious social ones, but the private stuff easier to hide in an academic, over-achieving student culture: intellectual pride, merciless judgments, sexual fantasies and career idolatry.

As I contemplated what seemed to me a crazy extension of unmerited grace, a niggling suspicion took root: if these guys are willing to take on someone so obviously unqualified as me, what did this mean about the others in the leadership club? I’d always been able to cut myself some double-standard slack in my criticisms of chapter leadership because I was convinced that in the us/them division, “them” meant spiritually qualified folks who, if a little out of touch with a sinners’ world, were at least mature, victorious Christians. “Us” on the other hand, were the rest of the schmoes in the Kingdom who had to settle for eating with the tax collectors. So whenever I saw weakness in those with special leadership blessings, I pounced on them and demanded immediate reforms. My own hypocrisy and pride was at the back of this: “I may be a sinner, but at least I know a stupid decision when I see one.”

So the opportunity to join the chapter’s leadership team caused a crisis for me: “them” would now be “us.” My experiences with other members of that year’s exec soon confirmed what became a new working axiom: Christian leaders are still sinners. Even bad sinners. Not as bad as the Apostle Paul, maybe (who claimed the title “chief of all sinners”), but still really bad. And I was one of them.

That sobered me up pretty quick.

I began to devise theories to deal with the new evidence that Christians in leadership are still undeniably depraved. How could we lead others if we were still sinners ourselves? It began to dawn on me that I might be in the “sin, confess, sin, confess” cycle for a lot longer than I thought when I first started doing the Christian discipleship thing. I began to get nervous about hidden sins that hadn’t bothered me before. And I definitely felt remorse for the more social sins I’d committed before — like the vicious criticisms I regularly flashed at folks I later realized were just like me. Oops.

I also thought about other leadership lessons I’d learned. Leading a Bible study my sophomore year had shown me that I didn’t know much about searching the Scriptures until I took on the responsibility for guiding others. As a Bible study leader, I worked very hard at understanding the Scriptures. Despite my preparation, it was rare that anyone else in the study exhibited as much insight or fascination with God’s revelation through the scriptures as I felt during the study. Rather cynically, I began to wonder if my small-group members might be coming because they enjoyed seeing me learn this stuff for the first time, things they apparently had learned in Sunday school or youth group years before. Bible study leadership eventually convinced me that, actually, I was the one benefiting from having group accountability in my pursuit of a basic spiritual discipline: personal Bible study. What might I learn now from joining the chapter leadership and discipling other Bible study leaders?

I began to toy with an idea that spiritual leadership was little more than public discipleship. Basically, you take sinful, broken children wrestling with God’s grace in their lives and you make them do that dance of discipleship on a stage. Sell tickets; maybe get some popcorn vendors; let informed bystanders make bets on the outcome. Although I was now a “them,” I still identified with the “us’s” of the world, the people desperately in need of God’s daily grace just to smile and say nice things to strangers. At times, my greatest gift as a leader was saying that I was sorry — sorry for my pride, sorry for my selfishness, sorry for my giving you a hard time for doing the same. The first time I read James 3:1, I don’t think it sank in:

“Not many of you should presume to be teachers, my brothers and sisters, because you know that we who teach will be judged more strictly.” I’d doled out the greater strictness myself, so I knew about that. But I’d never read verse one in connection with verse two (NRSV): “For all of us make many mistakes. Anyone who makes no mistake in speaking is perfect, able to keep the whole body in check with a bridle.” Wow. There was “us” again — making mistakes in a grand way. Teachers usually have an attentive audience when they say something wrong. I did too, only now I was “teaching” not just with my words, but with my life as I discipled younger believers and others seeking spiritual truth. When I made mistakes in this kind of teaching, much more than rephrasing was necessary to clean up my messes. Much, much more.

In fact, I began to realize that I would need all of the power to be found in the blood of Christ if I was ever going to lead my life in a manner worth of the gospel. At that point, I got scared, and in my fear, I learned to reach out for the body and blood of Christ. I learned about forgiveness.

On some days during my years as a leader in InterVarsity, I felt like a big failure. I constantly asked myself, “When am I going to stop screwing things up and become a leader worth following?” What I was really asking was, “When can I began to point people at myself instead of Jesus as the perfect example of all to which they should aspire?” After years of public accountability in the “sin-confess-sin-confess” cycle, I’m pretty sure that I’ll never be able to point people at myself instead of Jesus. And why would I want to?

I’ve also learned some things about the downsides to my old model of leadership. Leadership acted out according to my original us/them idea (that is, leaders are victorious, mature Christians who don’t sin) can lead to hypocrisy and an unfeeling distance between a leader and other Christian disciples. Many of our pictures of authority have more to do with maintaining an aura of infallibility than pursuing others in love with an acknowledgement of one’s own brokenness. Christians who aren’t comfortable with themselves because they don’t have peace with God about their own failings usually become stiff leaders who subconsciously keep their distance from people they think should be looking up to them. Until, of course, they are fortunate enough to be humbled, like me, with public failures that become points of grace.

Thankfully, we don’t have to live or lead according to the us/them model. Grasping the gospel and squeezing it for all its worth means that we, as Christians, have no reason to be ashamed of our sin anymore. Ashamed of sinning? Yes, of course. But as we daily give ourselves and our failings to God, he accepts us and restores us with loving grace. Ultimately, God is the only real “them” in the world. And inexplicably, he’s chosen to live among “us” through Jesus Christ. When I said yes to serving on my chapter’s exec team, I had no idea leadership could be this good. Isn’t this news worth sharing?