Why did God choose to become human? 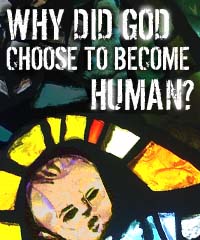 What motivated God to be born incarnate — to become human flesh and blood? As Christmas approaches, you might be asking this Good Question too. But this question and response isn’t just about an abstract theological notion. It’s about the redemption and health of all Creation, including people and our planet.

First we need to understand that God loves his Creation. In the first chapter of Genesis, God calls everything he made “very good”. Part of that Creation included people, commissioned to care for and rule over the earth. As a result of the Fall, in which we disobeyed God, Creation is now broken, dying and in rebellion.

“Since we have broken our relationship with God by not trusting and obeying, God must act to reclaim his work,” explains Dr. Terry Morrison, who works with InterVarsity’s Faculty Ministries. “In the words of 2 Corinthians 5, God wants to reconcile all things to himself.”

But how can God effect such a plan, to bring that which is not God back into right relationship with himself? What created thing can do that? “No thing,” says Terry. “So God must do it himself. He must become made of earth, live in time, even die, as do all his creatures, so that he can deliver his Creation from rebellion and death. Not only must he totally identify with us — except for not rebelling in sin — but he must also make a way to offer that reconciliation to all.”

It’s important to realize that God didn’t “have” to do anything to restore creation. He is under no constraint from anything external to himself to do anything he doesn’t choose to do. But he can choose to act, and the Incarnation is a middle action in the broader act of God’s creating — and then perfecting — that Creation.

Cleaning up our mess

Dr. Gary Deddo, theologian and an editor with InterVarsity Press, says, “God did not have to create at all. But God chose to create with the purpose of perfecting Creation. He also freely chose to do whatever it would take to bring restoration to his Creation. God anticipated, and likely even foresaw, that this would involve the incarnation and atonement.” That Jesus would die on the Cross for our salvation did not deter God from acting to redeem his Creation. “God created the world out of love as Father, Son and Holy Spirit,” adds Gary, “and so God redeems and perfects out of that love, even at his own cost. For that is what divine love is — and so what divine love does.”

Humanity has an important place in creation. Our calling was to be a channel of blessing to the rest of creation. “Humanity in its unbelief and disobedience interrupted God’s purpose,” says Gary, “so God had to redeem and re-create people first so that in the end all the rest of creation could also be restored. There is no magical fairy dust — it needed to be an inside job. Jesus Christ, God incarnate as a human, as both obedient Son and head of humanity, restores humanity.”

Terry points out that Jesus’ life and death show God’s amazing love through both vulnerability and power. “On one hand,” says Terry, “God enters time and space, matter and energy, as a weak, poor human baby, lives a common-yet-sinless life and dies as a rejected good man. But, of course, how could death and destruction hold God the Creator? It couldn’t, so in power he rose to a new life and offers that to his Creation: “Be reconciled”. And, again, in weakness, he entrusts this good news and the message about reconciliation to his human followers, to pass on to all his creatures by the testimony of our lives and words.”

Mind boggling, isn’t it? And the implications for being part of God’s plan for restoring “Shalom” to his creation are no less huge.