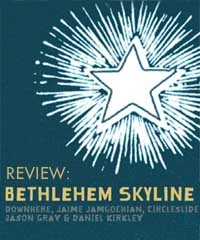 Christmas albums are a dime a dozen. Is the Centricity label’s new holiday compilation joyful and triumphant, or should it be roasted over an open fire? StudentSoul.org gives Bethlehem Skyline a spin.

Of the many commercial enterprises that assail us at Yuletide, the one I dread most is the Christmas album. There are really only two Christmas albums anyone needs: Handel’s “Messiah” and Phil Spector’s “A Christmas Gift For You.” In these, you have all the sacred and secular holiday music you will ever need. Beyond these, there is the good (“The Andy Williams Christmas Album”), the bad (anything by Mannheim Steamroller), the nostalgiac (Vince Guaraldi’s “A Charlie Brown Christmas”), and the ironic (Barbra Streisand’s “Christmas Memories”). And then there are the countless hundreds of albums that are recorded, released, and out-of-print by Martin Luther King Day. The Centricity label’s Bethlehem Skyline is one of these — occasionally good, sometimes risible, mostly forgettable. Note the album name: Centricity may be hoping to trigger cool associations with Dylan, but anyone hoping for a warm, laid-back collection of songs is in for a rude surprise. As with many CCM albums, all performances on Bethlehem Skyline, whether good or bad, are drowned in syrupy overproduction.

1: The album is off to a nice start with “How Many Kings,” an earnest slice of alterna-pop. Downhere sounds a bit like Coldplay spliced with Guster … which isn’t a bad thing.

2: Bethlehem Skyline stumbles, and not for the last time, with Circleside’s “Jesus Is Born.” Circleside sounds like a boy band whose members have learned to play their own instruments. Paint-by-numbers corporate rock.

3: Cookie-cutter vocalist Jaime Jamgochian takes on “Oh Come, Oh Come, Emmanuel.” In a word: horrible. The chilly minor-key mystery of this great advent hymn is buried under studio slush. Listen to those gooey background singers — you can almost hear the inappropriately cheery sweaters they’re wearing, with snowmen and holly knitted across the front. This is exactly the kind of performance that has made CCM (along with rap-metal) the pariah genre of popular music. Just teeth-on-edge awful.

4: Jason Gray heroically pulls this album out of its nosedive with the well-written “Mary Did You Know.” Unfortunately, the overproduction that plagues Bethlehem Skyline is evident here as well, but I suspect that’s indicative of the label’s modus operandi. Under the flourishes and layered chimes is Jason Gray’s quality songwriting, glowing like an ember.

5: Prepare for whiplash as we follow Gray’s sincerity with Daniel Kirkley’s saccharine and utterly unnecessary version of “Have Yourself a Merry Little Christmas.” This is one of those tracks that I hear and I think, “Do they really believe that there are people out there who will gain pleasure from this?” Now, to be fair, this isn’t really Kirkley’s fault. He’s saddled here with a song that’s pretty much unredeemable (note to artists: if your name isn’t Judy Garland, and you’re not starring in Meet Me In St. Louis, do not attempt this song). I can picture the Centricity artists gathered for a production meeting, doing rock/paper/scissors to decide who would have the thankless task of recording this stinker, and Kirkley desperately crying “Two out of three! Two out of three!” Kudos to Kirkley for getting through it with a straight face. He must be a real pro.

6: Downhere keeps the plates spinning with the rousing “Glory to God in the Highest.” This is a band that can obviously play, and they frankly need to stay as far away from the producers of this album as they can in the future. “Glory to God …” probably sounded fine in the recording studio, and then (like so many songs here) it was overlayered and overdubbed to the point where, right around the two-and-a-half minute mark, this decent little band starts to sound like Petra circa “Not of This World.”

7: Circleside attempts “Joy to the World.” Another bloodless version of a Christmas standard. Dire. Avoid at all costs.

8: Centricity continues its Sherman-esque path of destruction through the Christmas canon with Jaime Jamgochian’s painful rendition of “Come, Thou Long-Expected Jesus.”

9: Once again, Jason Gray comes to the rescue with “Miriam,” a darkly tender paean to the mother of Jesus. The lyrics are surprising, given the album’s tendency toward treacle: “Medieval paintings glaring down / stony figures judge and frown / wearing a halo like a crown / could that be Miriam? / Gentile temples, stained-glass worlds / cherubim with golden curls / how unlike your Hebrew world, sweet Miriam / I don’t know if you ascended / I don’t care what’s been amended / there was once your miracle / the faith of a little girl …” The zealous overproduction has been more or less kept at bay here, allowing us to hear the actual song, and it’s a gem, heartfelt and unpretentious.

10: “What Child Is This?” by Daniel Kirkley. The Velveeta flows freely here as another classic bites the dust. The inherent spirit of wonder and hushed reverence of “What Child Is This?” has been completely trampled. Have they no shame? Take a straw poll, Centricity, and you will find that “bombast” is not a word most of us associate with “Greensleeves.”

A nice little four-song EP is tucked away in Bethlehem Skyline, but this in no way justifies its purchase. I recommend that you check out the individual albums by Downhere (Wide-Eyed and Mystified) and especially Jason Gray (All the Lovely Losers).

Simple enough question, but the answer may not be quite so simple.