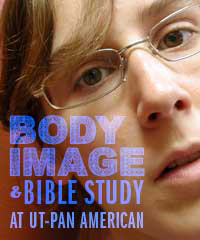 The men from our Bible study sat in my living room with confused looks on their faces as I handed out copies of the first chapter of Michelle Graham’s book, Wanting to Be Her. “Um, Nick? I don’t want to be her,” Steve joked. “I like me.” It was a humorous start to our serious discussion ahead. We were about to discuss body image.

Our Bible study at UT–Pan American had a scheduling conflict. One of the resident assistants of Unity Hall was putting on a body image program for all the women in the dorm the same night as our small-group Bible study. All of the girls in the Bible study went to the program, so I took the guys over to my apartment nearby.

The women’s discussion in the dorm was planned to talk about body image issues they struggle with. I thought it was important for the guys to begin to understand some of the issues that our sisters in Christ deal with on a regular basis.

Together we read and discussed the first chapter of Wanting to Be Her: Body Image Secrets Victoria Won’t Tell You. We took a closer look at how society pushes certain values on women in all cultures. We also talked about some of the ways men’s language and actions perpetuate some of the lies that society says to women about beauty.

“I’m glad we’re talking about these things,” said Juan. “It’s just something that’s so taboo and I want to know how girls are feeling and what they think.”

After a while one of the girls called and said they were done with their meeting and they were ready to meet with us. Before we went back over to the dorm, I gave the guys specific instructions. They were only to ask the girls questions about the program or anything else related to being a woman and body image issues. I encouraged them just to listen to what the girls had to say.

When we arrived, we discovered that some women came to our meeting who weren’t even involved in the Bible study. Other girls were calling their boyfriends to come and sit in on the discussion!

During our session together, the men didn’t make any comments or give any opinions or advice. They just asked questions and learned from the women about the issues they struggle with and how men can support them.

One student, Kristy, said, “It reminded me that sometimes the media sets unrealistic expectations. I realized that I am the way I am for a reason and it is beautiful. God made me this way.”

After an hour and a half, as we were drawing to a close, something interesting happened. One of the women from Bible study said, “Well, we’ve been sharing a lot about us as women. How about men? What’s body image like for you?” It was amazing to hear the men talk honestly about some of the issues they struggle with.

When Lisa was asked how she felt about the evening’s discussion with the guys, she admitted that it was little awkward at first. “But it was a great opportunity to talk with them and try to reshape how they think about women — and to get them to leave the Victoria’s Secret image at the door,” she said.

Kristy responded, “I liked having the guys listening to our opinions on how we feel about ourselves. I feel it gave them a new perspective about women.”

Near the end of the discussion, one of the guys from the Bible study, Martin, stood up and said, “There’s something we want to give ya’ll.” Each of the guys began to pull out flowers they had purchased from a local store before returning to the dorm and proceeded to hand them out to all the women who were there. In addition, the hall director, Desiree, purchased fifteen copies of Wanting to Be Her to hand out to the girls at the dorm.

We praise Jesus for an amazing and redemptive evening of mutual learning that will help us understand and care for each other as men and women — and as brothers and sisters in Christ.