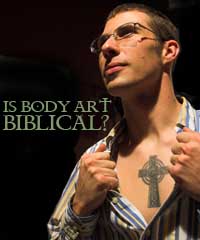 Does anyone really consider body art “edgy” anymore? Indulge in a little people-watching at your local student union, and you’re sure to notice a prevalence of ink and piercings. Tattoos have become so commonplace they’ve lost any shock value they once had. If you want to outrage polite society, try a mullet. That would be risky.

So other than generic coolness, what are people getting out of body art? Can it be more than decorative rebellion? In response to this Good Question submission, we hosted a roundtable discussion and asked a group of young people for their opinions on body art. Some gave positive reasons, ranging from artistic expression to intentional identification with a particular Christian community. Lydia mentioned her relatives in Egypt who are Coptic Christians. “It’s common for Copts to tattoo crosses on their wrists to distinguish themselves from the Muslim majority, and it’s a visible risk of faith,” she said.

For some people, there is a connection between tattoos and inner pain. Emotional and psychological trauma can leave deep scars, and a tattoo may be cathartic and empowering: controlled, intentional exterior suffering as an antidote for crippling, interior suffering.

Body art can also be a reminder of someone or something that is deeply significant to us. When soldier Marissa Strock returned from Iraq without her legs, she got a large tattoo of a winged orchid on her upper back. Above the flower are two names: Delgado and Reynolds. Below is a date: November 24, 2005. Delgado and Reynolds were killed when their humvee ran over an IED in Iraq, and her tattoo reflects her painful loss and honors her fallen comrades.

Your body is a temple

If you are a follower of Jesus Christ, what does the Bible say about piercings and tattoos? Two scripture passages are generally cited when these issues arise. The apostle Paul writes in 1 Corinthians 6:19-20, “Do you not know that your body is a temple of the Holy Spirit, who is in you, whom you have received from God? You are not your own; you were bought at a price. Therefore honor God with your body.”

It’s interesting that this passage is specifically addressing sexual immorality, and Paul’s point is that the body houses the Holy Spirit. He makes it clear that the body is to be used only for purposes honoring to God; our bodies are not even our own property. One might read this verse and consider body art to be a kind of spiritual graffiti — therefore God’s temple should not be covered in it.

But is every form of body art an act of temple desecration? Certainly Christians are not consistent in this view. Today, for example, few in the evangelical community would prohibit make-up or pierced ears (at least for women). Of course, fifty years ago this wasn’t necessarily the case. God and his Word may be unchanging, but Christian culture is every bit as mutable as pop culture.

What about that one Old Testament passage — the one that specifically prohibits tattoos? It’s Leviticus 19:28: “Do not cut your bodies for the dead or put tattoo marks on yourselves. I am the Lord.” We consulted with a Ph.D. in Hebrew studies who pointed out that, in the context, God was warning his people to stay away from rites and practices associated with local pagan religions, particularly those that were physically or morally disfiguring. Some scholars believe that, as an act of mourning, some of the cultures surrounding the Hebrews would cut themselves and rub ashes from the funeral pyre into their wounds, causing scarring. Both the Old and New Testament embrace a high view of the goodness of the body as part of God’s creation, not the abuse of the body in the name of religion.

Hopefully, anyone using this verse to support a blanket prohibition of all tattoos or piercings is very carefully groomed — check out the preceding verse: “Do not cut the hair at the sides of your head or clip off the edges of your beard” (Leviticus 19:27).

So can we pick and choose which Bible verses to take literally? That road can quickly lead to legalism and inconsistency. Christians claim they are no longer bound by the law, but are under grace, called to love God with all their heart, soul, mind and strength. Whether a person gets a tattoo, keeps a tattoo, or removes a tattoo is not so much a matter of the law, but rather a matter between that person and God.

The aversion many Christians (or your grandmother) may feel toward tattoos has far more to do with traditional cultural notions than with anything found in the Bible. In our culture, tattoos have been associated with criminality, sexual immorality, paganism, low socio-economic status and the risk of disease from unsanitary needles used in inking.

It’s also important to remember the heinous uses to which tattooing has historically been put: branding criminals, identifying Jews and other minorities during the Holocaust, and marking “ownership” of slaves (particularly in the antebellum American South). Add to all this the perennial concerns regarding youthful rebellion, not to mention evangelical paranoia regarding anything smacking of an alternative lifestyle, and we have a big fat associative thumbprint on our collective psyche.

Where does this leave us? We confess we’ve only scratched the surface (ouch) of this deeply-layered topic. What are your thoughts on the subject? Feel free to add your comments.

What do you do when your super-sized to-do list exceeds the hours in your day?

Busy Sickness
Have you struggled with being too busy all through your college years? You’re not alone.
Login