A burning desire to bond 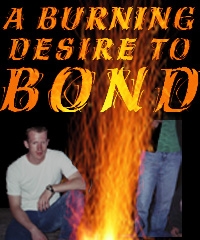 What’s the most spectacular thing you can find to burn? That’s the challenge I give the guys in our fellowship at our annual Scavenger Hunt Bonfire before they set out to find the biggest, strangest, coolest things to burn. Campus dumpsters and local trash piles produce couches, Christmas trees and construction spools for the ultimate blaze. Our goal is to build community among the guys — and fire unites.

There are many strong and deep relationships among the men in our InterVarsity chapter at the University of Wisconsin-Eau Claire. Most of our Bible studies are organized by gender, so men meet in small groups together. There are personal discipleship relationships in place, and many of the guys are in leadership roles. But we’re always looking for ways to build the men’s ministry on our campus, even if it’s not PC. I’m convinced that God made guys to be guys, so sometimes we get together just to be loud, rowdy, smelly and to break things. It’s bonding.

One night we had a Rocky movie marathon. We fast-forwarded through all the dialogue to only those scenes in which there was fighting or training. It was great. Then we each had to drink a raw egg. Of course the only person who couldn’t do it was our staff worker, who wimped out by scrambling and frying his egg. We put it on YouTube.

I know it’s dangerous to generalize, but I’m going to go ahead and do so. It seems that the women in our chapter love to get together and talk — that’s how they build relationships. But guys are different. We generally don’t want a conversation, we want an experience. We want to go do something, and if we can do it together, it becomes a shared struggle, victory, and a bonding experience.

Our campus is on a river, so this past spring I took some of the guys on a canoe trip and camped for a weekend on a river island. We all needed the change of scenery from classrooms to wilderness. Spending the weekend with nature and with each other refreshed our bodies and souls, even though they still haven’t forgiven me for forgetting to pack sugar. The oatmeal was terrible, but the fellowship was memorable.

I get frustrated when I hear both the world and the church send out the same message to guys: Don’t be so competitive and rowdy … be sensitive and responsible. Now, I’ll admit that there is a time and place for sensitivity and responsibility, but men need to be men. And sometimes that means being wild, crazy, and at least slightly irresponsible.

One wild and crazy event we had in the spring two years ago was a relay race on the river. We had five canoes with three guys in each canoe. The campus is on a bluff, with stairs leading down to the river, so the guys had to race up the steep stairs to get their paddles and lifejackets and then return to the canoes and paddle upriver around the bridge and back. Then they had to climb a tree to retrieve a flag. The final portion of the race involved eating a whole sleeve of soda crackers and chugging a two-liter bottle of soda pop. That was the great equalizer. Oh, I should mention that every canoe flipped in the river at least once. The water was frigid, resulting in shivering competitors, but every canoe finished the race. The guys are still talking about it.

Our scavenger hunt bonfire is always memorable. We hold it outside the city limits where it’s legal to burn stuff, and we don’t burn anything that isn’t on its way to the trash pile. Over the years, we’ve burned hundreds of political signs (after the elections), a huge banner with a Christmas scene, and several living rooms worth of discarded furniture.

One night we were digging around in a dumpster and a man came out and hollered at us. He thought we were throwing things into his dumpster. We had to explain that we were, ah, removing his trash to burn it. He didn’t believe us at first, but when he found out we were serious, he took us to a vacant apartment that was filled with old furniture he wanted to get rid of — a couch, chairs, dining set, bookshelves, beds, picture frames and more. We hit the mother lode! The bonfire that night was sensational.

Did you know that large quantities of flour are highly combustible? (Keep your distance to stay safe.) Also, multiple rolls of toilet paper are really cool in a fire because they produce flaming streamers that rise high in the air. The guys in our chapter know this stuff, and know it well. It’s all a part of how we build community among the men in our InterVarsity chapter in Eau Claire, Wisconsin.

If you’re working with guys, or if you are one, remember this simple formula for success: guys + bonfire = friendship.

Note: Not all videos linked to on this site are created by or hosted by InterVarsity Christian Fellowship/USAÂ®. InterVarsity is not responsible for the content of such videos, and any copyrighted content in such videos is the property of the copyright holder.