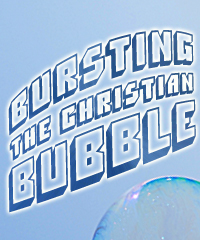 I decided in my first year at college to make God a priority — and, for me, that meant making Inter-Varsity a priority. I became busy leading Bible studies and prayer meetings. I went on a summer mission trip, and had a lot of Christian roommates. But how was it that, by the end of my fourth year, God was showing me I had wandered so far from his heart?

I’m Canadian, and I love my Inter-Varsity chapter at Brock University in St. Catharines, Ontario. I entered the university as a timid recluse — who didn’t have anything in common with her roommates — and became the sociable girl who went out every night with her Christian friends (but still had nothing in common with her roommates). In my second year, I moved in with some Christian girls, helped lead a mission prayer group, and went overseas on a mission trip.

In my third year, I moved in with even more Christian girls, joined the leadership team as the prayer coordinator for our chapter, started a weekly prayer meeting with my housemates, and organized the first 24/7 week of prayer for our fellowship. In my fourth year, I led a Bible study, attended the Urbana 06 student missions convention, and joined my housemates in reaching out to our neighbors. Oh, and I also volunteered at my church.

This picture may appear varied and colorful, but something about it made me feel uneasy. With a sinking feeling in the pit in my stomach, I fearfully asked God what needed to change.

After final exams, I spent a week at a training event studying the Gospel of Mark for eight hours a day in manuscript Bible study. It was intense. What had been dawning on me in the previous weeks finally shone very brightly through the biblical text. The truth was hard when it smacked me in the face: I was a Christian leader, yet I didn’t believe God was who he said he was. I was “ye of little faith.” And, even though I had denied it a couple months before, I was ashamed of the gospel. It was like I had just heard the cock crow, like Peter, and it broke me. It was simple: I have no non-Christian friends.

There are a number of ways that this had managed to escape my notice for so long. First, I was used to a comfortable, Christian bubble. I had been raised in a Christian home and went to Christian schools. I thought I might just be called to serving Christians. I knew it was a problem whenever the words “I have no non-Christian friends” came out of my mouth, but it was always something I thought would work itself out on its own.

Then one day my housemates and I hosted a party. We intentionally invited our non-Christian neighbors. These were students who were known to be the bane of the neighborhood, but were otherwise great people and very friendly. As we prepared, I wanted to take down some overtly spiritual posters we had in the kitchen and redecorate a bit — no need to scare the non-Christians with our Bible-verse art, right? This is when my housemate accused me of being ashamed of the gospel.

Even now, thinking back, I’m amazed at how grand a defense I made of my actions. God revealed to me later that I had this spiel ready every time my faith was in danger of peeking through. I was constantly telling myself (and God) that, as a master of social propriety, I had to avoid the topic of God to get by. Religion, after all, is taboo in social conversations.

But I had gotten in the way. There has been a lot of pain in my life, but God has given me reason to rejoice! People tell me I’m a good person, but when there is an opportunity to tell them why, to point them to the source, I step in the way. I let them see me, but never mention God’s name. My actions have been saying that I don’t really believe in God and who he says he is, because I live a life of hesitancy. If he turns out to be a mistake, if all this Christian stuff fails me, if God doesn’t provide for me like he says he will, I have a back-up plan. I have this persona without Christ as simply a student, just like everybody else.

As a Christian, I want to find my identity in Christ, walking with eyes focused on him alone. Yet I had been living a double life, a lie, which allowed me to keep my eyes on myself. I was looking out for “Number One” — and ironically losing my life in the process. After studying Mark, I had to make a choice. I decided I was going to lose my life for Jesus, to gain true Life.

The day after the Mark study ended, I was on a bus to Wisconsin to work for the summer with Inter-Varsity/USA’s multi-media communications team, 2100 Productions. I was terrified, but for the first time in a long while, I had some faith. I pulled out my manuscript on the bus, trying to re-read some of the passages I had just studied. I passed in and out of sleep and prayer, with the manuscript on my lap, its pages covered in barely-legible notes and bright-colored markings. The man sitting next to me asked me about it. That conversation was the first time I was ready to share my faith with anyone God put in my path. God reminded me of his awesome reality that night; he gave me the words, and I spoke his truth. He is true, just like I’d been saying for years, but now both my words, and actions, proclaimed it.

This fall is my last semester before I complete my degree, and I’ll be seeing a lot of familiar faces. Perhaps this time around, people will know that I’m a Christian before they find out about it on my Facebook profile.