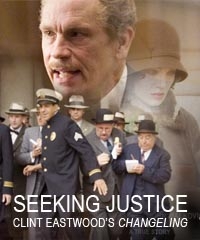 Few directors have explored the twin themes of justice and redemption as deeply as Clint Eastwood. He has continually wrestled with these themes for almost forty years, often subverting his own iconic personae in the process (Dirty Harry revisited in Gran Torino and The Man With No Name in Unforgiven). While not on the scale of Million Dollar Baby or Mystic River, Changeling is nevertheless a solid entry in Eastwood’s quintessentially American oeuvre.

Set in Los Angeles in 1928, Changeling is based on the true story of Christine Collins and her boy, Walter. Several months after reporting her son missing, the Los Angeles Police Department (LAPD) told her they had found him in the company of a drifter in Illinois. They staged a big, teary reunion and convinced her to take the boy home, despite her protestations that he wasn’t her son. When she continued to protest, they brought in “experts” to explain how he possibly could have dramatically changed in appearance while he was gone, even shrinking several inches and being circumcised without remembering the event. She continued to protest, so they declared her psychotic and locked her away for good. Case closed.

Yet the words of the Old Testament prophet Isaiah echo through the centuries: “… learn to do good; seek justice, rescue the oppressed, defend the orphan, plead for the widow” (Isaiah 1:17 NRSV). Isaiah’s words were written in the 8th century BC and it’s pretty easy to feel like they have no relevance for today. Surely in 21st century America, widows and orphans are taken care of, right? Perhaps, but 1928 wasn’t that long ago. Have things really changed?

Thankfully, someone in 1928 was reading his Bible and still finding it relevant. John Malkovich plays a radio preacher who makes it his job to announce the corruption and brutality of the LAPD. When he hears of Collins’ complaints, he pleads her case; it is Malkovich who springs her from the psycho ward, along with all of the other silenced and oppressed women. As he bursts open the doors of their prison, I was reminded of another passage in Isaiah, one quoted by Jesus:

“The Spirit of the Sovereign LORD is upon me,
for the LORD has appointed me to bring good news to the poor.
He has sent me to comfort the brokenhearted and to announce
that captives will be released and prisoners will be freed” (Isaiah 61:1 NLT).

As Changeling progresses, it becomes clear that Walter Collins has been kidnapped, along with several other young boys, by a crazed maniac (Jason Butler Harner) living on a chicken ranch. Now the police captain (Jeffrey Donovan) is in hot water. Director Clint Eastwood juxtaposes the trials of the two men, and thus poses a question straight out of the pages of Isaiah. Is it worse to be a sick and twisted killer of children, or to be a figure of authority that refuses to hear the cries of the poor, the widow and the orphan?

Cinematically, Changeling is pretty messy. I don’t think director Clint Eastwood or Malkovich really know what to do with this preacher, a man of God who stands up for the poor and oppressed; the character mostly seems to appear when he’s needed and then he is forgotten.

The movie loses steam as it moves further and further away from its climax (the Isaiah 61 scene.) But thematically, it’s one of the most compelling movies produced recently. It has been nominated for three Academy Awards.

Just released on DVD, it’s one worth watching and then talking about afterward in coffee shops or dorm rooms. It could be a great introduction to a small group Bible study (or GIG) of Isaiah.