Confession in reverse at UNC-Wilmington 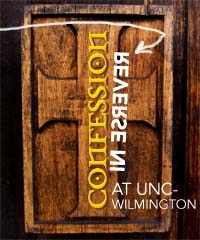 Students walking by our pop-up tent completely ignored us. Our idea of a confession booth wasn’t working, so we made posters for people to read. “I’m sorry for misrepresenting Jesus,” one said. Slowly students realized we were not there to tell them to repent — we were apologizing to them.

There is an invisible barrier between the average student and Christians on our campus at the University of North Carolina-Wilmington. For years, traveling preachers have come to the steps of our clock tower to condemn people’s sins and demand repentance. Some of these pastors are well-intentioned and genuinely want to see students come to know Christ. But there are some preachers we dread seeing, the ones that shake heavy Bibles high above their heads and shout about hell and damnation — and ignore any need for relationship, or grace.

The students in our InterVarsity chapter earnestly began talking about how to break down this barrier to our Christian witness. The idea came from Donald Miller’s book, Blue Like Jazz, where a group of college students built a confessional with a twist. Rather than hearing confessions, the Christians confessed, apologizing for apathy, hostility or ignorance in the name of Christ, or the lack of concern for the environment, sex trafficking and other issues.

We liked the concept but wanted to make it unique for our relaxed campus, located ten miles from the beach. We made plans and distributed flyers, but they were ignored. When we set up our tail-gate pop-up tent, no one stopped — or even glanced — in our direction. Despite our creative efforts, it wasn’t working as we had hoped.

“Our goal was that people would ask us what we were doing,” said Peyton Jeter, a leader in the chapter, “but students have learned to keep their heads down and avoid eye contact as a result of the many hellfire-and-damnation evangelists who come to our campus.” 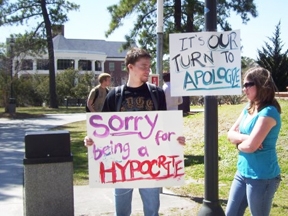 We needed to shift gears, so we wrote our apologies on posters and stood along the sidewalk at a non-threatening distance. Some approached us and asked what we were doing, and we responded by saying, “We’re sorry for the ways we haven’t represented Jesus.” One of the posters said simply, “I’m sorry for not speaking out against hate.”

“We were completely upfront with people,” Peyton states. “Our signs apologized for specific mistakes, errors and sins that had been committed by Christians which misrepresented Christ. We stood passively and calmly, allowing students to read the message and come to us to talk.”

For the next several hours we had a number of very casual conversations. I talked with a student who said he was curious about what the Christians were up to now. He told me that, because he was gay, he had been called names and was told he was going to hell. He had grown up in the church and had prayed to accept Jesus, but when his father got a DUI ticket, the church asked his whole family to leave. I was saddened by his story. He asked me briefly about God’s love and heaven and then asked to take some pictures. He gave me his contact information before he left.

Some conversations were unexpected. One angry student saw us and got right in our faces, telling us that if we expected other people to apologize, then we ought to start by apologizing first. Those of us holding up signs were in shock and didn’t respond at first. She had misunderstood what we were doing. As she was walking away, one of our students blurted out, “I’m sorry for not loving you like I should,” — the message on the sign he was holding. The student stopped to find the source of the voice. When she saw a familiar face, her demeanor changed. The apology came from a senior who sat next to her in a class. They had gotten to know each other over the semester, so when he apologized, she listened as he explained the reasons for our confessional. 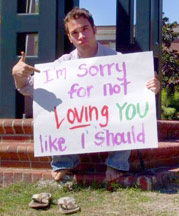 By the third class change, something happened. Instead of ignoring us, most people read our signs. I watched people’s lips mouthing out the words we had written. As they walked by us, their conversations began to be about the signs. Some people asked what we were doing. We then got to say what we had prepared to say inside the confession booth tent, which by this time was relegated to storing our book bags. Some people stayed around for several minutes asking us why we felt like apologizing for things we didn’t directly do. There were several Christian students who thanked us for saying what they had struggled to express for so long. Some even asked if they could hold a sign for a while.

The most striking response was from the most marginal students who would never come to a religious meeting. Some stopped by to see what we were doing and ended up sharing their stories because they saw we weren’t a threat. Many told us how they grew up in the church, only to have something lead them away. Typically it was due to some unfortunate event where they were cast away in Christ’s name at a moment when they were most vulnerable.

This event challenged the students in our chapter to take a risk for the gospel. UNC-Wilmington is a very laid-back school. Students are proud of this and will do almost anything to avoid conflict. Most would rather watch someone else step out rather than take a chance themselves. So, for our campus, those of us who are Christ-followers had to be the ones to step out. When Jesus healed a leper in Mark 1:40-45, he took on the leper’s isolation so that the leper could be restored to community. On our campus, we had to take on the potential embarrassment and hostility so that those passing by might see Jesus and be healed. We had to apologize in a way that would be received, even if it meant taking on something we didn’t do. It didn’t go as planned, but our confessional was the gospel — and we saw students respond.

“As we stood around the area holding our statements of apology, we were humbled before our student body,” Peyton admits. “We had to be willing to acknowledge our sins, and the sins of the church, and ask for forgiveness publicly.”

Before the confession booth, Alicia Forero struggled with her awareness of the invisible wall that seemed to separate the “good” Christians from everyone else. Her experience with the confessional was very freeing. “Admitting our failures was hard, but when we showed our vulnerability to people, they knew we were real,” Alicia said. “It was beautiful! I think we took some bricks out of that wall.”

This “reverse confessional” never felt like an evangelistic event. It was simply our effort to begin restoring trust and invite healing — a role the InterVarsity students embraced whole-heartedly.