Review of The Dark Knight 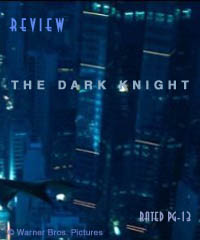 Right off the, um, bat, The Dark Knight establishes itself as a different kind of superhero movie. Instead of your typical hero vs. villain showdown, it’s a movie about the soul of a city—a city in dire peril, not just of being destroyed by the villain, but of giving in to its own despair, corruption, and selfish nature. What does Gotham City need now?

Actually the seeds of change are in The Dark Knight’s predecessor, Batman Begins, when Batman declares Gotham a city worth saving, contrary to Raz Al Gul’s desire to wipe it off the planet. But declaring Gotham worth saving doesn’t exactly save it. The process of the city’s renewal has just begun, and now Batman/Bruce Wayne must consider questions like, “What does the city of Gotham need? What kind of a hero will serve the city best?” Batman strives to bring hope to Gotham, and looks forward to a day when the people will unite, take pride in their community and themselves, and no longer need the symbol he provides. Then, perhaps, he can lead a normal life and marry the girl of his dreams. Perhaps.

Ah, but the Joker has other plans. Heath Ledger’s performance as the Joker is the stuff of legend. He is the scariest villain to come along in quite a while, primarily because Ledger plays him with such ferocious intensity, intelligence, and bone-chilling aggression. He is a villain on par with Iago and Mephistopheles; he is Satan to Batman’s Christ. He never offers a reason for his destructive nature, and never seems to need one. As Alfred says, “some people just want to watch the world burn.” He may come across as a nutcase, but he is all the more scary precisely because he’s not insane. He’s smart, and has a philosophy of his own—he’s an extremely evangelistic nihilist. He even describes himself as “an engine of chaos,” and yeah, he’s got a hemi.

A spiritual as well as physical battle for the city ensues. The Joker seeks to demoralize the people and cripple their spirits by setting up traps in which people must make impossible choices; Batman, on top of tripping up the Joker’s destructive traps, must find ways to make sure the Joker doesn’t win the moral battle. If he saves the girl, but the soul of the city dies anyway, the Joker has won. The stakes have never been higher. And things don’t go smoothly for the man in the funny suit. He pays a high price for his calling, and wonders at times if he isn’t doing more harm than good. His friends get hurt, and some give up. In the end, he must make an agonizing decision about what is best for the city, a decision that costs him personally in ways he must never have expected.

The Dark Knight is a movie I look forward to watching with the folks in my campus fellowship. Though we will never don rubber suits, fight maniacal villains, or have secret meetings with the mayor, we are called to ask the same kinds of questions Batman must face. What is best for our campus? What kind of people does our campus need? How can we inspire hope, bring peace, and foster reconciliation on our campus? And how much will it cost us? How much are we willing to sacrifice to see our campus renewed? As we honestly, earnestly look forward to a day when the light defeats the darkness, when we are no longer needed to spread the message of hope because it will be broadcast in the heavenlies, these are the questions we must wrestle with.

The Dark Knight is a fun, entertaining film for sure, but it seeks to be much more—a movie about redemption and renewal, about the danger of despair and the fragility of hope. I highly recommend it, and I recommend taking along a few friends with you when you see it.