Are you doing too much for your small group? 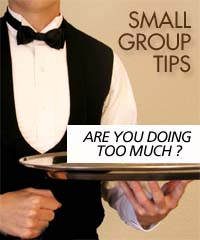 Attention small-group leaders: Do you have a tendency to jump in and answer every question that comes up in your small group? Do you sometimes feel that meetings are unsuccessful if the group doesn’t leave with every detail and fact that you had prepared to teach them? If so, you are probably doing too much for your group.

A leader who attempts to do for his or her group what the members can do for themselves can kill a group! In trying too hard to help them, the leader can impede or prevent both the growth of the group and the individuals in it. The group must develop its skills through doing.

A cardinal rule for the leader of a small group is “Never do anything the group can do for itself.” If the group can accomplish a task without the “expert” help of the leader, they should be encouraged to do so. On the other hand, if the group can continue only with the leader’s help, then the leader should offer it — but only what is absolutely necessary to keep the group moving.

When the group knows they are responsible for their own accomplishments and skill development, then success belongs to them, not to the leader or to one member.

For example, a group member might ask how many men finally went to battle with Gideon. The leader might answer without hesitation, “Well, the book of Judges tells us that he took three hundred men with him.”

In this case, the leader could have capitalized on the opportunity for the group to learn together. He or she might have asked if anyone else knew the answer. This would have given the group a chance to teach and counsel each other (Colossians 3:16). It would also have shown the members that they could help each other even outside of the normal group meeting.

What if no one in the group knows the answer? The leader might set up a further opportunity for them to teach themselves. He or she could urge them to find the answer in a concordance or a Bible dictionary. If some group members aren’t sure how to do that, the leader or, better yet, another member might show them. This five-minute delay could lay a foundation for a group that is hungry to discover God’s Word for themselves.

Stronger than one person

A group can accomplish through cooperative effort many things that a leader alone cannot. For example, the group leader alone can’t make a newcomer feel welcome. Only the group can accept a new person and take steps to include him or her in discussion, decisions and relationships. The group welcomes a new member and assimilates that person into their midst.

The group, then — not the leader — must work towards its own solutions if it is to develop strength and pursue the mission that God has called it to. Jesus told his group of disciples that they would do even greater things than he did himself. These words were an expectation as well as a promise. Jesus expected that the disciples would be transformed and change the world, but he didn’t give them all the answers they would need to do so. He modeled a good leadership principle: he walked alongside the group as an enabler, ready to assist, but not to do it all.

Next time your group has a question, ask yourself, “Is this a question or a problem that I must answer, or can we as a group figure it out for ourselves?” Let the group try its wings and watch them gain confidence in their own ability.

Dick Wulf, M.S.W. Adapted with permission from The Small-Group Letter.