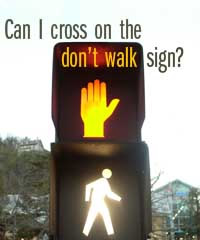 This is a question I’ve never answered well, and believe it or not, Jesus has something to do with it.

There are both legal and cultural responses to this, and as is common with many such questions, they are in conflict.

The law says, “Don’t Walk means DON’T WALK. We put it in capital letters, color it amber and make it flash so you notice it. And we can fine you for not obeying it.”

But our culture says, “Hey, if no cars are coming, it’s fine. Cops aren’t looking hard at this one.” According to the daily street culture at my alma mater (University of Illinois at Urbana-Champaign), if a large enough student mob is crossing it doesn’t matter what the traffic light says. Cars will stop. Usually.

Now for the story behind this one. I’ve been hit as a pedestrian crossing against the walk signal. Twice. The first time I was a kid, not paying attention. The second time I was a college student, assuming a lot about the cars coming. Usually they slow down. Not this time; one kept coming.

You know how a few vivid images linger in your head after a crisis experience? Here’s one: A police officer is holding a ticket for me to sign while I’m laid out flat on a stretcher in the emergency room. He hadn’t bought my pleas that everyone else crosses against the signal. And there were witnesses. I’m telling him that I’m sorry to be smearing blood all over his ticket pad while trying to read and sign it without my glasses. He tries hard to say it’s okay.

“Can I cross on the Don’t Walk sign?” Well, there’s more to this story, and it makes the answer even more complex. I had just met the legal answer. So I started looking into the biblical answer. In his letter to Titus, Paul the Apostle encouraged believers to obey the laws of their nation, thus showing honor and humility for the sake of Christ (see Titus 3:1-2). I could handle that. After all, I wanted to represent well for the kingdom of God. But it meant standing still on the street corner while everyone else in my morning mob jostled past, thinking I was nuts. After a few days, someone finally said so.

“You’re are very strange, man,” said a voice behind me. It was Kevin, one of the guys on my dorm floor. “No one else — and I mean no one — waits for the light to change before they walk.” I responded candidly, telling him that I was trying to obey God about something that probably seemed pretty unimportant for most people, but not for me. I told him about the ticket, showed him my scars and explained that I was trying to figure out what God had to say about obeying mundane laws. Thus started a series of conversations that finally led to his becoming a follower of Jesus. You can read more about it here.

So, “Can I cross on the Don’t Walk sign?” I suppose the best answer is that you shouldn’t. But if you do, well, you may pay a price. And if you stand there waiting, someone may want to talk about it.