A farewell to Hogwarts 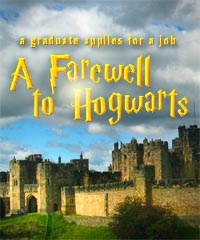 The job recruiter looking over my resumé was serious, her finger lingering on one line of the watermarked piece of paper. I tried desperately to read her face as my mouth became dry, and I felt beads of sweat rising. There were two little words on my resumé that, depending on who you were, could wholly impress you or seriously offend you. Those simple words were “Dumbledore’s Army.”

I’m a graduate of Hogwarts School of Witchcraft and Wizardry, a member of the house of Gryffindor. I may not have the same pizzazz on my resumé as, for example, Harry Potter, but I’m proud to say that we knew each other and that I was a member of Dumbledore’s Army (D.A.). To my relief, the recruiter asked how my time at Hogwarts had influenced me and if I felt my schooling had prepared me for this job. The skies parted, and I was able to tell her exactly why I thought Hogwarts had prepared me for the working world.

What I learned from Dobby, the house-elf

When I first started at Hogwarts, I considered it a diverse place. As I got older, however, I realized that my definition of diversity only included human beings — the witches, wizards, squibs and Muggles. I neglected to acknowledge giants, house-elves or centaurs as a part of my world. My time at Hogwarts taught me the world is full of diversity and I am strengthened by learning from others.

I used to be very fearful of what was different — and there are times I still am. But facing these differences and engaging the unknown is worth it. I think specifically of a little house-elf named Dobby. When I first met him, I thought he was rather gross and really weird. He was always hitting his head on things and causing all sorts of trouble, but he ended up being someone who was incredibly loyal and he had great insight into what was happening behind the scenes. In the end, this creature I normally overlooked sacrificed himself bravely in order to protect Harry Potter. Dobby spent most of his life in a dirty pillowcase, despised and neglected, but in the end he was what he always was — a hero. Through interactions like the one with Dobby, I found that humbly learning from someone who is different can provide understanding that I never would have achieved on my own.

My time at Hogwarts showed me that we need each other to navigate in each other’s worlds. As I think about this job opportunity, it is my hope that I can intentionally choose to learn from those of different walks of life and incorporate these insights into whatever task or project is presented to me.

What I learned from Professor Snape

As I learned to value the differences in others at Hogwarts, I was simultaneously confronted with the reality that sometimes we choose our partnerships, but often we don’t. It is so easy to work with and learn from someone who shares my similar views on life, who operates the same way I do and whom I generally enjoy. These are the partnerships that I love. However, it is a very different story to work with someone who is prideful, power-hungry or critical and seems to create obstacles to my success — or is someone I just generally dislike. For example, I think about Professor Snape who tortured us in potions class, always humiliating me in front of my peers for not precisely measuring my ingredients. I never in a million years would have willingly chosen Professor Snape as a teacher but, in the end, his potions have proven quite helpful and I was forced to work hard at a subject I had little interest in.

When confronted with unlikely or undesired partnerships, Hogwarts taught me that I always have a choice. I can whine and complain about my predicament and check out mentally from the whole situation. Or, I can agree to disagree, learn to accept people for who they are and look for the hidden lessons to be learned. I know that if I’m to work in this diverse world I have to try to understand and value people, even if we can’t get along. Whatever job I get, I will probably work with people I would not have chosen. Yet it’s my hope that I will continue to choose to be a learner in these partnerships, whether or not I become great friends with them.

What I learned from Harry Potter

Just as some relationships are thrust upon us and stretch us, Hogwarts taught me that the same goes for leadership: leadership is sometimes thrust upon us whether or not we desire it or feel ready for it. Harry, for example, didn’t necessarily want to fight the evil encroaching on our world. If it had been his choice, he probably would have preferred that someone else take responsibility. While Harry did not want to lead, he made the decision to lead and he used whatever skills, gifts and strengths he felt he had. With each choice, I saw Harry learn to trust that he really did have something to offer as a leader. But becoming the leader he is today took time. He had to humble himself, learning from others and using the strengths of others, rather than doing things all by himself.

In watching Harry, I learned that when we are forced to become leaders, we learn to accept that we have a purpose. I know that as I enter the job world, the temptation will be to take a back seat and let others do the leading. Yet, to do so might devalue the experiences of my past and cheat me of learning more about who I am and the role I am to play in this world. I may not feel completely ready for all that this job will ask of me, but I’m hopeful that my past has prepared me for the tasks that lay before me.

After we finished the interview, I said my thanks and headed out the door. I left feeling nostalgic about my time at Hogwarts and a little saddened. Sometimes I want to return to Hogwarts, to a simpler time when I didn’t have to look for jobs, start over, and make new friends and networks. It feels safer to think of my past and reside in my comfort zone and not have to take any more chances. But deep down, I know Hogwarts will never be the same, even if I were to return. As I think about the person I was when I first started at Hogwarts, I can only marvel at how I’ve grown and changed. I know that five years from now I don’t want to be the same person I am now. I want to experience new things, take risks, learn more and engage with the world.

I realize I am who I am because of my time at Hogwarts, but I know I still have much to learn. So, the interview that initially had me sweating like a parcel owl ended up being the start of something new. Did I mention I got the job? That’s right; I am now both a graduate of Hogwarts Academy and the new team leader for the Ministry of Magic’s diversity team, working with Muggles for a better tomorrow.

More resources for recent graduates are available through InterVarsity’s alumni department. You can order the free publication, FLUX, which contains this story and other articles.

Additional resources for transitioning into the workplace: