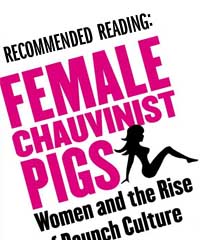 In the light of our recent items Imperfect reflections and A brotherhood of grace, former Urbana.org writer Paul Grant recommends Female Chauvinist Pigs: Women and the Rise of Raunch Culture (Free Press, 2006), a critique of the Girls Gone Wild culture with its odd brand of feminism.

Playboy was back on my alma-mater’s campus the other day, asking if anyone wanted to take her clothes off. It was for a college special — “Girls of the Big Ten” or some other euphemism for philistine lechery.

Yes, it was payday: Hugh Hefner’s people were collecting on their favor from the previous year, when they named my school America’s top party school. Everything comes with a price, it seems, even dubious honors.

But why does Playboy care about college partying? It’s about the money, of course. This is a for-profit corporation. The capitalists at Playboy Enterprises need the college market. They need the cachet of campus cool.

Not coincidentally, perhaps, volunteers were not hard to find. If Girls Gone Wild’s cameramen find the beaches of South Padre teeming with coeds who will take it off for free, it’s no surprise that Playboy’s edgy glamour is a draw.

This is the environment Ariel Levy tackles in her book Female Chauvinist Pigs. Levy is a young feminist with the heart of a previous generation’s tireless soldiers. The movement’s gains are at risk, she argues, and not because of a patriarchal backlash. Women themselves are wasting hard-won gains on short-lived pleasures.

Female Chauvinist Pigs tells how the meaning of “women’s liberation” evolved from equal access to power, to an equal right to be irresponsible. In part it was a generational struggle: young women rejected the pioneers as humorless and unfeminine. Instead we’ve bought a seductive lie:

“The proposition that having the most simplistic, plastic stereotypes of female sexuality constantly reiterated throughout our culture somehow proves that we are sexually liberated and personally empowered has been offered to us, and we have accepted it.”

It’s simply not true, argues Levy. Being the object of some man’s lust is not the same as having real power. But, she concedes, power might not be part of the equation at all. “The only alternative,” she writes,

“To enjoying Playboy (or flashing for Girls Gone Wild) … is being ‘uncomfortable’ with and ‘embarrassed’ about your sexuality. Raunch culture, then, isn’t an entertainment option; it’s a litmus test of female uptightness.”

In other words, female raunch might be an expression of female cool more than female power. Still, men, not women, are the biggest beneficiaries of Girls Gone Wild — ask any man. We live in a culture determined to turn girls into women and men into boys; sexual readiness (or availability) for the former and moral irresponsibility for the latter.

Ariel Levy is a deep thinker who has learned from the feminists of the seventies. That willingness to learn from history, more than any political stance, may be what sets her apart. “Whereas older women were around for the women’s movement itself,” she writes,

Raunch, then, is more than bad taste. It’s about broken relationships, between men and women, of course, but also between generations. It’s about myself at the center of everything, without consideration of others. It’s about experience as a goal, rather than a means. Levy again:

“Our baseline assumption [is] that sex is something you should always automatically take when you can get it, something akin to, say, money. The more money, the more sex, the better, because these are things you accumulate to increase your status, your wealth of experience.”

If the here and now is all that counts, if yesterday doesn’t matter, and today’s choices have no bearing on our options (or our character) tomorrow, then raunch is a rational course of action. But if the world is bigger than our campuses, if there’s more to life than reputation for partying, we may be shortchanging our (and our culture’s) future for a hot moment in front of the camera. Ariel Levy wants to liberate not our present, but our future.