Frustrated with religion but open to Jesus 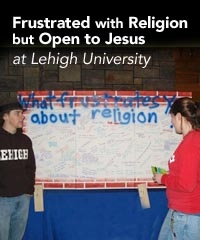 “What frustrates you about religion?” The question was posed by InterVarsity students who were curious — and nervous — as they queried their peers at Lehigh University in Bethlehem, Pennsylvania. People were invited to write their complaints on a canvas wall. The responses were honest, and that led to some deeper conversations about the difference between religion and Jesus.

For two days at lunchtime, Christian students hosted “The Wall” — with its bold question — and invited comments and conversations from over two hundred students. Liz Kidney, InterVarsity staff, noticed that this was a brave step for many of the students in the chapter. “We pushed through our fears of talking about religion and listened openly to the frustrations of other students,” she said. “We also asked if they would like to learn more about Jesus and experience him, not religion.”

One of the leaders in the fellowship, Joe, learned that he had to break through his own stereotypes of who might be open to a conversation about religion and Jesus. “I talked with the director of the LGBTQA (Lesbian, Gay, Bisexual, Transgender, Queer, Questioning and Ally) Services and asked if he had any thoughts,” Joe said. “Listening to him was an eye-opening experience to me. He was surprisingly receptive and was interested in coming to the discussion night we had, but wasn’t able to make it.” Joe is grateful for the open dialog and learned from the interaction. “It was just really cool to talk with him and to have him be excited about what we were doing.”

The handwriting on The Wall:

Here are some of the responses to the question, “What frustrates you about religion?”

* I’m tired of old men telling me how to live my life * Fake people * Only one is right * Too many do’s and don’ts * Violence in the name of God * When people try to scare you into religious stuff with the whole “you’re going to hell” mentality * In your face, door-to-door sales people for Christ * Corruption of power * Televangelism * Lack of respect for science * People arguing over religion are like four-year-olds arguing over whose invisible friend is better * Emphasis on tradition * Intellectual suppression * Close-mindedness

It was clear that many students were aggravated by religion or some religious people. “The Wall” was an effort to open the door to frank conversations and genuine hurts. As students listened and talked together, there were opportunities to invite students to learn how Jesus and religion are different by attending the large-group chapter meeting, called “180,” that week.

“We wanted to create more space for student to talk about their frustrations and really be heard,” Liz states. Students who attended “180” had a chance to discuss their honest feelings about religion and explore the person of Jesus Christ together. Several InterVarsity students and a guest speaker talked about how Jesus was personal to them. Some of the students participated in a dramatic reading that presented Jesus in current cultural language, and everyone was encouraged toward more dialog and action toward Jesus.

“It was great to have so many conversations about what students really think about Jesus and what they want,” Liz states. “I think many of the conversations that were started will continue because of the relationships that have been built.”

As Joe reflected on his conversations at “The Wall,” he said, “It was exciting inviting people to take a step toward a relationship with Jesus, but also overwhelming. I mean, who am I to ask if that’s a step people are willing to take? But God used me — and spoke through me — when I had no idea what I was going to say. It was really cool!”

Students will continue engaging the campus in questions of religion and faith, knowing that Jesus, not religion, makes all the difference in the world.