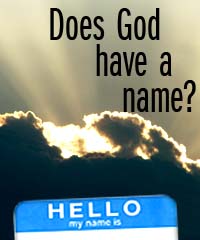 Simple enough question, but the answer may not be quite so simple. When God told Moses to go to Pharaoh to demand that the Hebrews be set free, Moses asked God, “Suppose I go to the Israelites and say to them, ‘The God of your fathers has sent me to you,’ and they ask me, ‘What is his name?’ Then what shall I tell them?” (Exodus 3:13) Was Moses being presumptuous? And what does God’s answer mean?

We asked Dr. Walter Kaiser, Jr., recently retired president of Gordon-Conwell seminary, what he thinks about Moses’ question and God’s response. “God did reveal his name; that was the point of responding with Yahweh,” says Dr. Kaiser. “It means ‘I will be [there].’ His name is formed by the verb ‘to be.’ Besides this, he is addressed elsewhere in scripture by many of his qualities and attributes.”

In other words, God answered Moses — with a verb. What is translated “I AM,” YHWH, stems from the Hebrew root hayah, “to be.” Bibles variously translate this as “I am who I am,” or “I will be what I will be,” or something similar. Most evangelical believers have adopted Yahweh as the way to spell out the pronunciation of the four letters (though not all scholars agree with this).

However pronounced, the meaning God intended for Moses isn’t something you can easily wrap your mind around. Gary Deddo, theologian and associate editor with InterVarsity Press, says that Moses’ question and God’s answer are important to grasp, even though it’s hard. We asked Gary if he thought Moses was presumptuous to ask God to give a name as a sort of calling card for the Egyptians. “Well, it would be presumptuous for us to think we can name God any more than we can create an image of God,” says Gary. “And God’s reply to Moses does address any temptation to presumptions. But more particularly, Moses’ encounter indicates that God cannot be compared to any created thing. God is the incomparable one. The God of the Jews can only be named and defined in terms of himself. I am, that I am. In using this name, God indicates that he does not depend upon anything else — ‘I am the being one, the living one, the one alone who was, is and will be.’”

What’s in a name?

Names are how we identify people. We also use nicknames, attributes and roles. In Through the Looking Glass, the White Knight offers Alice some insight about names and labels that may shed some light on this. He proposes to comfort a tired and discouraged Alice by singing her a song:

“Is it very long?” Alice asked, for she had heard a good deal of poetry that day.

“It’s long,” said the Knight, “but it’s very, very beautiful. Everybody that hears me sing it — either it brings the tears into their eyes, or else —”

“Or else what?” said Alice, for the Knight had made a sudden pause.

“Or else it doesn’t, you know. The name of the song is called ‘Haddock’s Eyes.’”

“Oh, that’s the name of the song, is it?” Alice said, trying to feel interested.

“No, you don’t understand,” the Knight said, looking a little vexed. “That’s what the name is called. The name really is ‘The Aged Aged Man.’”

“Then I ought to have said ‘That’s what the song is called?’” Alice corrected herself.

“No, you oughtn’t: that’s quite another thing! The song is called ‘Ways and Means’: but that’s only what it’s called, you know!”

“Well, what is the song, then?” said Alice, who was by this time completely bewildered.

“I was coming to that,” the Knight said. “The song really is ‘A-sitting on a Gate’: and the tune’s my own invention.”

Clear? Right. Well, maybe that didn’t shed a whole lot of light (but it’s great fun to read!). All this is simply to say that while we call God a number of “names” (Elohim, El-Shaddai, Adonai, Theos, Father, Abba), it’s hard (but very important) to nail down what God’s own, self-declared name really means for us, because it isn’t just something God is called. “I AM” carries the essence of the God who is. Confusing, perhaps, but Gary points out that God didn’t just leave us with his words to Moses. “It isn’t that God cannot be known at all,” he notes. “Even this negative message — that God can only be named in relation to himself — is a revelation. We cannot assume that since we cannot name God in terms of some created thing, that God himself cannot reveal or name himself to us. And that is the claim of Jesus and his witnesses. God said no to our creating images and idols in order to reserve a place for him to ‘image’ himself to us and in fact to finally name himself.”

I’ll just show you who I AM

The history of God’s self-revelation reaches its fulfillment in the coming of Jesus Christ. Jesus puts a name and a face on God for us. And he does so as God himself. “Jesus is the self-revelation and self-naming of God,” says Gary. “We don’t name or give an image to God. Notice that even in the birth story, Mary and Joseph are told by an angel what to call him — Jesus, ‘God saves.’”

Finally, Gary points out, Jesus himself tells us how to address and call upon the name of God. We are to baptize in the name of God the Father, Son and Holy Spirit. “That is the one name we are given and authorized to pass on. Notice that in this name, each identity in the Trinity refers not to Creation or a relationship with Creation, but rather refers to the others before and independent of anything in creation. The Father is the Father of the Son. The Son is Son of the Father. And the Spirit is the Spirit of the Father and the Son. God is naming himself in terms of himself and his own inner personal and Trinitarian life.

So does God have a name? Yes, in the Old Testament, the high point was the personal title of the God of Israel and Creation: Yahweh. In the New Testament, God shows up in the person of Jesus bearing the very stamp of the image of God (Hebrews 1:1-4). “He takes us to the Father and sends us his Spirit,” says Gary. “This is the God who is. God has named himself and revealed himself to us in Jesus Christ.”