A brotherhood of grace 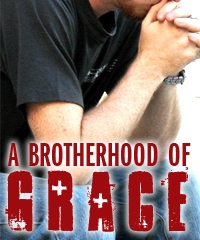 There is a midwestern campus where a group of guys meet every week to talk and pray together. The group isn’t widely advertised; few people even know it exists. This isn’t a secret society, just a bunch of guys who are serious about following Jesus and living for him — and dealing with sexual sin and lust in their lives. Together they listen, understand and support each other in the struggle for sexual health and wholeness — but it’s not easy.

The group has only been in existence for two years or so, and began when some of the members were talking together at an InterVarsity camp about some very personal issues. They agreed to meet together and pray for each other and the sexual temptations that each of them faced.

The group on campus has grown slowly through word of mouth. But not everyone is ready for a group where there are “no walls allowed.”

“We do not allow any false pretenses; we expect that the guys who come to our group are completely honest about their areas of sexual sin and want to pursue healing,” said one member. “We’re available for those who are willing to take the risk, but it’s difficult for some to step up, be vulnerable and trust the group.”

Those who do open up find the group to be a safe and supportive place, especially for those who may have gotten the message from the church culture that it’s not okay to be honest about sexual sin. They talk about the shame they’ve felt as Christians who struggle (and sometimes fail) and they appreciate the non-judgmental attitude of the other guys.

“We need to talk honestly about our temptations,” offered one of the men. Inspired by James 5:16, they encourage confession at the meetings, and new participants are relieved when the attitude of others toward them doesn’t change or become judgmental. “Confessing your sin to other Christians, especially when it’s sexual sin, is one of the most terrifying experiences I’ve ever faced. But it’s amazing. No one is loved any less after a confession. Rather than being condemned or mocked, your brothers rally around you and ask, ‘How can we pray for you?’ or ‘What do you need?’ There is a lot of grace here.”

This is a community of men who have promised to support each other 24/7. They recognize that it’s harder to stumble during a moment of weakness if they phone a friend for support and have a personal conversation. Some of them are connected with computer software that alerts the group when one of them has accessed internet pornography. It doesn’t block the sites, but it adds to the accountability.

Last year the chapter went to their area’s fall retreat, and all the men in the chapter got together late one night to talk and pray together. Because of the trust already in place from this group, all the men were very open and vulnerable with one another. They talked and prayed for more than four hours, and the Holy Spirit brought confession, repentance and healing to each one there.

That weekend, the deep level of caring for each other set the tone for the rest of the year. With strengthened relationships, guys confidently took the initiative to help each other live out what they had prayed for.

This deeper sense of community helped strengthen the chapter as well. Men developed healthier attitudes toward the women in the chapter and decided to honor them by planning and preparing a formal dinner for them. This had a huge impact on the sixty women who were served by the guys, and the simple but humorous program gave everyone a lot to laugh about.

The men’s group had another opportunity to serve women by partnering with the Battered Women’s Shelter in the area. They heard that the women living there needed help moving into transitional homes, so they offered their time and trucks to help get them settled. To the guys, helping someone move was no big deal, but it was deeply significant to the women and their children who had no one else to help them. Most of the women had no healthy relationships with males in their lives. When two boys of an abused mother were staring at them, the guys were aware that they were providing a rare positive role model as Christian men for these children.

For the guys who volunteered, seeing the effects of sexual harassment and abuse on individual women provided a valuable lesson. They realized that there were many wounded women in their midst, along with opportunities to serve them and build trust. For this group of guys struggling with sexual sin and lust issues, their road to transformation offers healing and hope to themselves and others.