Gracious listening builds relationships at the University of Washington 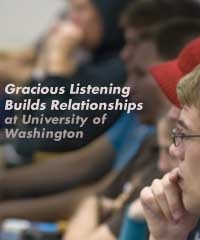 Three atheists, one agnostic and one Christian volunteered for a panel discussion to consider the question, “If Christians would listen, what would you say?” Well, they did have a lot to say — and the InterVarsity students who sponsored the event humbly listened. The honest dialogue turned into a riveting evening that engaged the hearts and minds of believers and non-believers — to the benefit of all.

Often Christians are perceived as being close-minded and judgmental, especially on certain topics. This fall, the InterVarsity group at the University of Washington honestly admitted that, as a group, they had not been good listeners to those around them. They wanted to change — but how? The group decided to host a “Listening Event” once or twice a quarter that would replace their regular large-group meeting.

“Our vision is to serve the campus, so we want to be a community of Christians that is accessible,” said Phil Hoffman, InterVarsity staff. “But we felt dissatisfied that our weekly large-group worship gathering was still not a very inviting place for non-Christians.” Phil believes the listening events are helping the Christian community become more inviting, as well as serving the students on campus by giving them a forum to talk more deeply about meaningful issues.

“If Christians were to listen …”

Phil was the moderator (and the only Christian) on the panel that discussed the question, “If Christians would listen, what would you say?” The evening included time for small-group discussion to give everyone an opportunity to participate, as well as a question and answer period. Here are a few quotes from panel members:

Phil noticed that it was refreshing for the Christian students to take time to just listen to what others had to say, and freely admit what they did not know. They didn’t have an agenda, nor did they feel like they were endorsing what any particular person said just because they were given space. “Since we’ve stopped trying to manipulate conversations, our non-Christian friends seem to actually be moving closer to God,” Phil observes, “and the core students in the fellowship are becoming more like Jesus in the process.”

As students in the chapter freely listened to what the non-Christians had to say, it naturally opened doors for them to talk more about God’s love. Phil had conversations with very intellectually-minded students and offered this example, “A relationship with God is like falling in love; it doesn’t make any sense — and in fact probably sounds ridiculous —- until it happens to you. At that point, you don’t try to figure it out. You just act on it.”

The idea for listening events began during New Student Outreach at the beginning of the year. The InterVarsity students advertised an open dialogue for anyone interested in discussing the issue of sex — often a taboo topic in religious contexts. They were upfront about being a Christian organization and honest about how Christians are often perceived as not listening to what people have to say in topics like this. They honestly acknowledged that many people have been hurt by Christians when it came to their sexuality, and they were looking for opportunities to build bridges with other students who may have had painful experiences from other believers.

That evening, about 120 students showed up for free pizza. The chapter had prepared three short drama presentations having to do with relationships and sexuality. The skits were entertaining and funny, yet realistic and thought-provoking. Afterward students were invited to break into small groups for a discussion on the issues raised by the skits.

The response to the evening was overwhelmingly positive. The chance to discuss such a meaningful topic openly and without judgment was very significant — even healing. One student had been hurt so much by Christians that she had left the faith. After the discussion, she said, “This is the first time I’ve been around a group of Christians that I believe are not going to judge me for the mistakes I’ve made in the past.”

Many students expressed appreciation for the event and signed up to be notified when the next one would be. New friendships were formed, and many of the InterVarsity students came away encouraged at how natural and life-giving it was to spend time listening to non-Christians and connecting over a deeply personal matter.

For students at the University of Washington, listening to each other with respect and openness has paved the way for deeper friendships and relationships. As Jesus said, “Whoever has ears to hear, let them hear” (Mark 4:9).