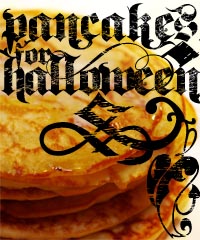 Halloween at UNC-Chapel Hill is like Mardi Gras. Literally tens of thousands of people (an estimated 80,000 last year) descend from all over the state to Franklin Street for drunken craziness. We decided that we wanted to steal an idea from InterVarsity at the College of William and Mary and run a “Pancake House” for students during Halloween night. When you think Halloween, who doesn’t think pancakes?

Students cooked all afternoon and made over 1,500 pancakes. We pitched a tent on south campus away from the Franklin Street craziness in order to make sure that we were serving mostly UNC students. We got tables and printed up flyers and got music cranking, and people came by the truckloads.

We had intended to serve from 11 p.m. to 2 a.m. but we ran out of pancakes by 1 in the morning. “Awesome” was the buzzword of the night. InterVarsity students who were helping to make it happen kept saying, “This is AWESOME!” Dozens upon dozens of the estimated 600-800 students who stopped by also said, “This is AWESOME!” Word spread throughout campus that we were down south giving away free pancakes and students just kept coming and coming and coming.

I was planning on leaving around midnight. I left at 1:00 in the morning as pancakes were running out. I came home super-amped on extrovert adrenaline.

Some events are keepers, others go in the “we’ll never do that again” bin. This event is a keeper. Next year we could double the pancakes and still give them all away.

Got a great idea for a chapter event that has worked on your campus? Tell us about it! Leave a comment below or email us with your story.