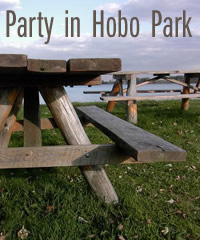 Downtown St. Louis boasts a Carnegie library, with marble floors and columns, painted ceilings, and enough rooms of books to allow a person to get lost for hours. Directly behind the library is a very small park, amazingly green after the spring rain, with shaded benches, a playground, and a bright blue fountain. It’s a beautiful place, but most people drive right by it. This is the territory of the homeless.

My friend Jamie and I decided to spend our Saturday afternoon there, just to see. We’d been to the park the day before in a group for a picnic lunch, and we’d met a kind man who had lost his job and been driven to homelessness earlier that week. Maybe he’d be there again. We brought lunch for ourselves and for him. Almost as an after-thought, we added a loaf of bread plus peanut butter and jelly in case someone else wanted to join us. The plan was to eat lunch and just enjoy the beautiful day outside. Jamie brought her guitar. I brought a book and paper to write letters, but never opened my bookbag.

It was a simple invitation: come join us for lunch. We only spoke to people on one bench, but the whole park came: maybe 12 men, as well as two children who’d been on the playground. It happened so quickly. We made an entire loaf’s worth of peanut-butter-and-jelly sandwiches and passed out a 12-pack of soda. We sat and chatted, getting to know one another. Conversations were so easy. There were no formalities to observe, no pretensions. The first man I talked to had a job writing about the life of the homeless in the St. Louis magazine What’s Up?, though the pay was not enough to afford renting his own place. So he slept wherever he wanted, which was fine by him as long as the weather was nice.

Soon after we’d finished eating, a truck pulled up and four people descended with a table they filled with Styrofoam containers and piping-hot soul food: wing tips and barbeque chicken that just slid off the bone, potato salad, spaghetti, pumpkin pie, and chocolate cake. I thought, does this happen everyday? People flocked from all over — more than had been in our group — and received generous portions as long as there was food to give. It turned out that the people had cooked this food as a fundraiser for a new program at their church, and they had randomly decided to bring their leftovers to the park that day. They served cheerfully and left as suddenly as they’d come.

It was an amazing banquet, not only for the food but for the way it changed Jamie and me from providers to equals who partook in a feast with everyone. “Come on,” one man said to Jamie and me, “you have to try these wings. Here, take one, I have more than I need.” When I politely refused, not wishing to take his food when he didn’t know about his next meal, he insisted, saying, “You shared your food with me, now I want to share my food with you.” And, touched at the way one who freely receives can freely give in turn, I took the chicken wing on top. We marveled together at the abundance of food, and at God’s generosity for providing two unseen meals that day.

The mood was festive. We had good food, company, and music: all the elements of a celebration. Here are a few more snapshots from the day:

Darius the Drummer, so called because he drummed on any surface he could find, exclaimed that he had so much food that he had to reorganize his plastic bag to make it all fit. He gave me a cookie out of his bag, which I shared around. He talked about his wife and babies staying with his in-laws. He and his wife had gone through a budgeting class as part of a habitat-for-humanity-like program. He’s been working on a new house, and in two weeks they were all going to move in. His face glowed when he talked about his children.

Stretched out on a piece of cardboard in the shade, Curtis was at the park for the first time that day. He talked about his daughter, who was my age, and his first grandchild. She’d invited him to live with her, but he didn’t want to be a burden. It had been four weeks since he’d talked to his mother, and he resolved to call her that day. He knew she would be worried about him. He was raised right, he told me. He was a good person. He had training in landscaping and construction. He would call his mother, but he wouldn’t go see her, not until he was well. What was he going to get well from? Crack. “Don’t ever start,” he told me, taking off his Yankees cap to run his fingers over his hair. “You never know where you’ll end up down the road. I had a house, a car, a family. I just like to get high. Don’t ever start.”

Penny, four months pregnant, was the only white person in that crowd other than Jamie and me. She was the only other woman as well, and she held us captive for twenty minutes telling her story. Penny’s apartment building had burned down three months earlier, and she was caught on the second floor. Before she jumped to safety, she saw a sparkle of light and heard the promise from God that he would land with her. She had an L1 fracture on her spine that put her in a back brace for three months and permanently barred her from her construction work. But everyone escaped the fire, and the fire truck arrived in only twelve minutes, normally an impossibility. Her story was long and wandering, but what kept shining through it all was God’s grace in her life. She had been a stripper and a crack addict; she had two more years left on parole. She dreamed of opening a comedy club with a grill in the back. After she finished her story, she looked through my notebook of songs and picked out “Your Beloved,” a Vineyard song by Brent Helming. The chorus declares the following:

The music continued in earnest after that. Everett, the eldest of the crowd, picked up Jamie’s guitar and began finger-picking hymns from memory while Darius the Drummer clapped along. Everett knew all the words to the songs, and had a deep faith that God would provide him with a job to replace the one he had lost. When we left later that afternoon, he carried the guitar back to the car for us because, he said, he was trying to set a good example for the others of how a man should act.

If I had come to this park on my own and never had these conversations, I would have clamped my hand over my purse and walked quickly through. I would have braced myself against catcalls and other approaches. I have learned to be wary. But that day, I realized as we were leaving that my backpack had been sitting several feet out of my reach the entire time. No one had touched it. Even if some stranger had tried to take it, he would have had people to answer to. Darius the Drummer, Curtis, Penny, Everett the Gentlemen — they were protecting us. I felt entirely at home.

As we were leaving, Jamie said somewhat jokingly to Darius the Drummer, “Thanks for letting us crash your party.”

He replied in all seriousness, “You’re the reason there was a party.” Many of the people had not talked much before. Some met that day for the first time. They certainly had not come together before like they had that afternoon.

I knew while we were at the park that God was there watching out for us. I marveled that I did not get a ticket even though I’d only had money enough to feed the meter an hour. We were there for three. But we did not know until the next day how full that protection had been. Later we found out that, before we’d arrived that afternoon, a huge fight had erupted over a cigarette. The police came and cleared the whole park. Everett called out to God, and God answered. Generously. We had come with a meager offering, the cheapest kind of sandwich you can make. God had provided a feast and a celebration.

At some point while we were sitting together on the steps, Jamie saw the police drive by, slowing to look at us. They were scanning for more trouble, as they do there multiple times a day. What must have gone through their minds when they saw instead two white girls, one pregnant homeless white woman, and six homeless black men chatting comfortably in the shade? What would that have looked like to them, only hours after the fight?

Everett the Gentleman labeled it best. Sitting with the guitar on his lap, he called the steps where we were sitting holy ground and said that Jesus was surely there with us. And I had to agree. I have no other explanation. That park is in God’s hands.

Emily Bright graduated from Williams College in 2004 where she was a leader in the InterVarsity chapter. In 2003 she was part of the CityLights summer project in St. Louis. She is currently working on a Masters of Fine Arts in creative writing at the University of Minnesota.