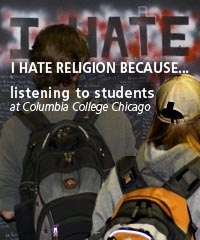 Like a magnet, the huge blackboard display pulled students to respond to its bold heading, “I hate religion because …” They eagerly wrote about their distaste for religion and their anger toward Christians — and were surprised that it was sponsored by a Christian group. Our InterVarsity chapter at Columbia College Chicago took a big risk inviting our campus community to dialogue about the truth of Jesus, apart from the serious mistakes of his followers — people like us.

During the first weeks of school, we created the eight-foot by four-foot blackboard with its provocative sentence-starter and encouraged dialogue about the topic. There are 11,000 students at Columbia College Chicago, the largest and most diverse private arts and media college in the nation. The campus consists of sixteen buildings that sit in the heart of Chicago’s South Loop, home to the Chicago Symphony, the Art Institute, and the Museum Campus. It’s a culturally-rich location.

Our InterVarsity chapter was looking for a way to open the door to spiritual conversations. Our goal was to build trust by lovingly listening to people’s stories of how they have been hurt by religion or religious people. Some students said they were impressed that a Christian would actually be willing to ask this tough question and then listen to their opinions. As a result, many who wrote on the blackboard took a step toward the gospel in beginning to trust a Christian.

By listening and caring, the Christian students found that doors opened for them to speak about their faith and the story of Jesus — and why they follow him. They were surprised by the openness of students to talk about their spiritual lives once they felt heard.

“I was a little nervous at first,” admitted Jason Servi, a film major, “but I found that many students were open and willing to talk to me about religion. It was interesting to hear what religion meant to them and how they arrived at their conclusions.”

Taylor Gleason, a journalism major, was one of the leaders who went through the training, so she was confident, but didn’t really know what to expect. “There was mutual respect that came out of almost all of the conversations,” she said. “I feel blessed to have contributed to God’s groundbreaking event at our school,” she added. Taylor is keeping in touch with one person she met, waiting on God for how to serve her new friend.

As we met people, we invited them to our next large-group meeting with a similar theme, “Where is God in the hypocritical church?” More than sixty people came to listen to Josh Taylor, a local pastor, who told his story about growing up as the son of a pastor and being disillusioned with the church. What he saw lived out among church members just didn’t seem to line up with what he saw Jesus talking about in the Bible. Because of his upfront and personal experience as a “preacher’s kid,” Josh sensitively engaged questions from the participants about hypocrisy in the church. But he also pointed them to God’s intention for his followers through the church — becoming a loving community that reflects the truth and grace of Jesus.

We are excited about the relationships that have begun from this outreach and pray that the Lord will continue to draw these students to himself.