What is the image of God? 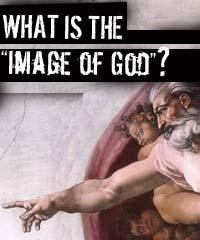 This is a great question, especially for this season of Christmas. Christians claim that God wants us to know him — not just to know about God, but to know God intimately. How is that possible if God is invisible? Is God embodied in other ways we can experience? The “image of God” is a concept God initiated to help us understand him.

The “image of God” shows up in several ways throughout the Bible. The first is in Genesis, as the triune God creates humankind “in our [the Godhead’s] image” (Genesis 1:26-27, NRSV). We are made in the image of God. That image is also expressed as male and female, complementary aspects of God’s character that, together with all kinds of people, help us appreciate the amazing breadth of God’s creativity and expression.

“Does this mean that we are equal to God or exactly like him? Certainly not,” says Mark Slaughter, InterVarsity staff specialist in Indiana. “We are made in the image or likeness of God, and are unique from the rest of creation and from animals in that we have both a body and a soul/spirit. While God is a spirit and does not have a body, we resemble God by having a soul/spirit. We also reflect some of his characteristics in being mental, moral and relational beings. Mentally, we are both relational and volitional, able to reason and to choose. Morally, Adam was created in pure righteousness, reflecting God’s holiness, and we have a conscience able to discern right from wrong. Socially, we were designed to live in community with others, reflecting how God the Father, Son and Spirit live in interdependent community, and are made to love and be loved, as God embodies love.”

Humans in God’s image were intended at creation to bring glory to God as people who hadn’t sinned. Fallen humanity hasn’t lost the image of God, but the image is tarnished. “With Adam’s moral freedom to choose,” says Mark, “he rebelled against God, which has profoundly damaged the image of God in humanity and affects us in all areas of life. Through Jesus Christ’s death on the cross and resurrection, God is now restoring his original image in humans as they are transformed by following Jesus Christ.” The writer of Hebrews says of Jesus that “the Son is the radiance of God’s glory and the exact representation of his being, sustaining all things by his powerful word” (see Hebrews 1:3). Jesus shows us who God is and what God is like. This is the message of the Advent season.

The image of God is also expressed in the richness of human culture and ethnicity. While sin and arrogance have divided us from one another and cultures contain both evil and good, history is headed toward the day when all of God’s people will celebrate together in unity. Revelation 7 describes the picture: “After this I looked, and there before me was a great multitude that no one could count, from every nation, tribe, people and language, standing before the throne and in front of the Lamb. They were wearing white robes and were holding palm branches in their hands. And they cried out in a loud voice: ‘Salvation belongs to our God, who sits on the throne, and to the Lamb’” (Revelation 7:9-10). The church as the body of Christ offers an early glimpse of that future harmony in the present. While the church has its troubles, it is the expression of God’s kingdom on earth, and it reflects his “grace and truth” as Jesus did (John 1:14).

One thing that is clear in the Bible is that we are not to create images of God and to worship them (see for example Deuteronomy 4:15-16 and Leviticus 26:1).

Bob Fryling, director of InterVarsity Press, talks about the implications of being created in the image of God in an article called “Imago Dei.” He writes:

“Our complete identity is made up of not only our spiritual identity in Christ but also our human identity of being created in the image of God, the Imago Dei… . Every human being from the time of Creation until this very minute has been created in God’s image. All peoples, male and female, of every language and cultural group bear the mark of the Creator in the very essence of who they are… . We are image-bearers of our Creator. We are not God, but we bear his resemblance. This is a staggering reality that begs for more understanding.

“… With the advent of sin, humanity has twisted this appropriate characteristic of dominion into domination of other people and of creation itself. Our world-wide environmental crisis and our deep hostilities to other people are distortions of what God intended. But the appropriate corrective to sinful domination is not irresponsibility but a loving stewardship of what God has generously given to us. We have been given the capacity to be accountable and to do things that are good. The Imago Dei calls us to that understanding and commitment.”