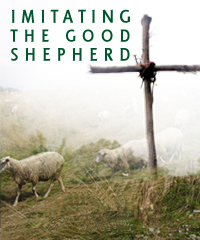 Ever try to get 500 sheep to go into a barn? One hot Wyoming afternoon when I was working as a shepherd on my family’s ranch, I tried to move our stubborn flock toward the barn door to no avail. Frustrated, I finally grabbed a docile-looking ewe and dragged her through the open door. The other 499 followed. All at once. I could barely see the barn door for all the dust flying up around it.

These days I work mostly with people, and I’m always struck by how sheeplike people can be.

I stood back and laughed. One minute no amount of yelling and pushing could get even one sheep through the door. But after just one ewe crossed that black hole, the whole flock was turning at top speed to smash their way into the gate.

As I work with people, I still feel like a shepherd — trying to get God’s flock to go where they’ve never been before and do what they’ve never done before. At times no amount of verbal persuasion can convince a group to do something. But if just one person takes the lead and shows others the way, the group eagerly follows. The biblical image of a leader is not of a cowboy, after all, but of a shepherd. Cowboys drive and push their herds from behind. Shepherds lead their flocks from the front.

The Bible, in fact, is full of shepherd imagery — both describing how God leads and cares for us, and how we are to lead and care for others in God’s flock. God the Father is portrayed as a shepherd in Psalm 23. In Luke 15:1-7 Jesus compares himself to a shepherd who goes after lost sheep. In John 21:15-17 Jesus tells Peter, “Feed my lambs,” “Take care of my sheep” and “Feed my sheep.” God’s leaders are called shepherds in the New Testament as well as the Old: “Keep watch over yourselves and all the flock of which the Holy Spirit has made you overseers. Be shepherds of the church of God, which he bought with his own blood” (Acts 20:28) and “I will give [Israel] shepherds after my own heart, who will lead you with knowledge and understanding” (Jeremiah 3:15). And if you are a leader in your campus fellowship, you are a shepherd in God’s kingdom, too.

Frankly, being likened to a shepherd is heavy stuff. The shepherds in Jesus’ era carried a lot of responsibility. Their lives were hard and dangerous. They were on call to protect their flock from predators 24 hours a day. Sheep are prone to wander; without a shepherd’s constant vigilance, a flock would simply disappear.

So what does it mean to “shepherd” members of God’s flock today? What does Jesus the Good Shepherd teach us leaders about being shepherds on campus?

Learning from the Good Shepherd

In John 10 Jesus tells a story about a shepherd and a sheep pen: “The man who enters by the gate is the shepherd of his sheep. The watchman opens the gate for him, and the sheep listen to his voice. He calls his own sheep by name and leads them out. When he has brought out all his own, he goes on ahead of them, and his sheep follow him because they know his voice. But they will never follow a stranger; in fact, they will run away from him because they do not recognize a stranger’s voice” (verses 2-5)

In Jesus’ day, sheep pens were made of a round wall, with no roof and one gate. The pen served as a home for several flocks. Every morning different shepherds would come to the pen; to separate their sheep from the others, they would stand at the gate and call them: “Here Fat Belly! Here Gray Leg!” The sheep would follow the shepherd out to pasture because they knew his voice.

This parable isn’t just aimed at leaders. All of us Christians are the sheep, and Jesus is the shepherd. We shepherds in God’s flock, however, should take note: before we can be good shepherds who lead the way for others, we must first be sheep who know and follow the Chief Shepherd’s voice ourselves. How well do we hear his voice among the others that clamor for our attention? Society screams, “Money!” Your professors confidently state, “God is a myth.” The Almighty GPA says, “I’m your ticket to success. Worship me.” Yet through the deafening roar the Shepherd’s voice whispers, “Follow me.”

Good leaders listen for the voice of the Chief Shepherd. As we develop an inner life of quietness and prayer, we can learn to be more sensitive to his leading. God knows what is best for you and your chapter, and desires to direct you. Don’t shortchange your flock or yourself by trying to do things without listening to him.

This is the introduction to a series about imitating the Good Shepherd. Click on a link below to explore more:

Imitating the Good Shepherd: Introduction (You are here.)