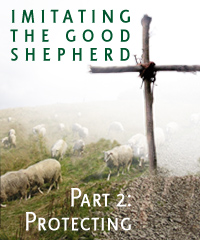 In the previous section (part 1), we talked about pursuing the sheep God has given us (that is, the people in our fellowships) and helping them feel comfortable and welcome. In this part, we’ll talk about protecting the sheep.

In John 10:12-13, Jesus paints a picture of how sheep suffer when their shepherd does not take a deep interest in them: “The hired hand is not the shepherd who owns the sheep. So when he sees the wolf coming, he abandons the sheep and runs away. Then the wolf attacks the flock and scatters it. The man runs away because he is a hired hand and cares nothing for the sheep.”

The hired hand in Jesus’ story is indistinguishable from the good shepherd until the wolves attack. Then he’s the first one to run away. The hired hand only watches the sheep because he gets paid to do so. At the first sign of danger, he’s out to save his own skin.

You obviously haven’t become an InterVarsity student leader for the money. But are you in leadership because you care about people? Perhaps part of you thought that asserting leadership would look good on your transcript — or at least make others in the group look up to you. Maybe you wanted to please the InterVarsity staff worker or student leaders who urged you to consider leadership.

Good shepherds persevere when their flock is under attack because they care about the sheep themselves. When the following problems threaten your group, will you run or will you stick it out?

As you get to know some of the sheep who bring difficulties into the group, remember — they’re not the wolves. They’re sheep who need special attention and protection. These are people whom God will use to make a good shepherd out of you. Anyone can care for people who are like them and reciprocate that care. But only good shepherds will take the time to bind up sheep when they’re hurting.

If you feel burdened about a difficult sheep in your flock, ask yourself: Do I find this person hard to deal with because of a mere personality clash, or because they’re in some way sinning against God and our group? If it’s the former, ask God to give you a love for the person that transcends your differences. If it’s the latter, confront the situation prayerfully and immediately. Gently find out if they’re even aware that they’re sinning. Ask about the circumstances surrounding their behavior. Have they already tried to overcome this sin? How? Throughout, take the posture of their advocate — not their enemy. Pray together and ask God to bring clarity and to reveal ways to change. You may want to bring your campus staff worker in on the situation, or even a professional counselor if the circumstances warrant it.

Earlier we talked about pursuing new people. You may also need to pursue those already in your small group or chapter who start to stray from their faith, your group or both because of sin or messed up priorities. Jesus told the Jewish leaders this parable: “Suppose one of you has a hundred sheep and loses one of them. Does he not leave the ninety-nine in the open country and go after the lost sheep until he finds it? … There will be more rejoicing in heaven over one sinner who repents than over ninety-nine righteous persons who do not need to repent” (Luke 15:4, 7). Will you go the extra mile to pursue one lost sheep under your care?

You are reading part 2 of a series on imitating the Good Shepherd. Click on a link below to explore more:

Imitating the Good Shepherd, Part 2: Protecting (You are here.)