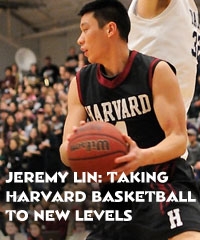 It’s March Madness and Harvard basketball fans are celebrating their best season ever. The team’s top scorer, Jeremy Lin, is making headlines as a gifted Asian American basketball star. We went beyond the hoops hoopla and talked with Jeremy about his passion for God and role as a missional InterVarsity leader and trendsetter on one of America’s most historic campuses.

While Jeremy’s basketball abilities and ethnicity have caught the attention of Time, Sports Illustrated and ABC Sports, he’s more than a talented athlete. Jeremy is on a mission for God. In this interview, Jeremy talks about his life as a Christian, a student-athlete and his involvement with the Harvard-Radcliffe Asian American Christian Fellowship (HRAACF).

StudentSoul.org: Congratulations on a great season. Your team has more wins than any in Harvard history. How has this year been for you?

Jeremy: It’s been great! We finished the regular season with a best-ever 21-7 record and we’ve been invited to a postseason tournament. The program is moving in the right direction and people are excited about basketball at Harvard.

StudentSoul.org: You’re generating a very enthusiastic and diverse fan base. That must be satisfying.

Jeremy: We’ve had great student support. It’s been unbelievable because we know that Harvard has never seen anything like this before.

StudentSoul.org: You’re nominated for the Bob Cousy Award as one of the best point guards in the country and your skills on the court have had a huge impact on the team’s success. How would you describe your influence as a Christian on the team?

Jeremy: I’ve learned how to be open and bold about my faith, but in terms of my influence, I just try to lead in a godly way. What that means for me is to serve them, whether it’s just doing the dirty work, like cleaning up sweat on the floor, or deferring to other people, or carrying equipment bags. In basketball these days, the rookies and freshmen are supposed to do the grunt work, and seniors relax and hang out, but when you reverse that, or when seniors help out with some of that, it shows that you’re trying to serve them, and that’s a good way to lead.

Also, the way you talk to your teammates and push them and the way you treat them is important. There is a fine line between trying to help your teammates and criticizing them. The toughest part for me is how to keep my teammates accountable but at the same time do it in a loving way that doesn’t judge or condemn them. It’s definitely been a struggle and I’m trying to learn how to lead consciously in a way that honors God.

StudentSoul.org: So you’re saying it’s a sensitive balance to speak both truth and grace to your teammates. As a leader you want to be honest and truthful when you see something that needs correction, but how do you offer grace as well? As a captain, do you have frequent opportunities to do this?

Jeremy: Yes, every day in practice I have to lead by example. But at the same time, when people aren’t doing what they’re supposed to be doing, you’re responsible as a player. You can’t rely on the coaches to say everything. The players have to be responsible and take ownership of the team. Every day in practice there are situations where you need to say something and get a message across, but do it in the right way.

StudentSoul.org: It sounds as if your teammates have a lot of respect for you, so you must be doing something right.

Jeremy: Maybe we all just have a lot of respect for each other. We’re real happy; we have a family atmosphere.

StudentSoul.org: Have any of your teammates expressed an interest in exploring faith?

Jeremy: Yes, some of my teammates, non-believers, want to have a Bible study. We’re just getting started. I’m looking at a curriculum called The Hurdle by Athletes in Action. The studies are very practical for athletes.

StudentSoul.org: What spiritual disciplines have you developed that keep you grounded and focused as a student-athlete?

And it’s really important to me to go to church, which is sometimes tough when I get back from road trips late on Saturday night, but I try to make it a priority to go every week. That helps me a lot. And I meet weekly for discipleship with Adrian Tam, my InterVarsity staff worker.

Having small group once a week gives me a lot of encouragement and accountability. Even though I go to church, I don’t really know many people there, but my real community is my small group.

StudentSoul.org: So your small group is a place where you can be honest and real; they know you and support you.

Jeremy: Yeah, and people are praying for you.

StudentSoul.org: Looking back, what have you learned from your journey as a student-athlete at Harvard? Have you encountered discouragement and disappointment in your athletic career?

Jeremy: When I first got to Harvard, I was suddenly around athletes all the time and I wasn’t used to that. It’s a tough environment and if you don’t have appropriate boundaries, you’ll compromise your faith. I struggled spiritually for a while and I didn’t have many Christian friends. It wasn’t until I got plugged in to a small group my sophomore year that things really started to change. I began to build a Christian community, learn more about Jesus in the Bible studies and develop relationships that helped me with accountability.

Athletically, my team wasn’t good my first three years here, and that’s always hard because everyone wants to win. Over the years I’ve learned that just because you follow God, it doesn’t mean you win every game or get what you want athletically. There is a godly way to play basketball and that’s what you’re responsible for doing. If you happen to get a championship, great, but if not, there is a lesson to be learned. And I’ve had to learn it because I haven’t been able to win an Ivy League championship in my four years here, and that’s something I’ve really wanted to do.

StudentSoul.org: You mentioned your small group was a turning point in your life. How did you get involved in the Asian American Christian Fellowship?

Jeremy: I joined a Bible study my freshman and sophomore years. Investing in AACF really spurred my spiritual growth because I made friends that I could talk to about Christianity and I was encouraged by what God was doing in other members of the fellowship. I became a co-leader my junior year and I’m co-leading again this year. The group is a mix of believers and seekers.

During the basketball season, I don’t go to the large-group meetings because they’re on Fridays. Our fellowship has about 80 people and our purpose is to know God and make him known. We’re trying to do that in a way that is relevant for everyone on our campus.

StudentSoul.org: What do you enjoy most about being a part of AACF and it’s mission at Harvard?

Jeremy: I think one of the most rewarding experiences in life is to see people come to Christ and make lifestyle changes. When that happens, you definitely see God behind it. This year we’ve seen eight students make first-time decisions for Christ and when I see that, it’s a great feeling. I’m really thankful that God is changing somebody, or sometimes he’s changing me. To see that transformation brings me a lot of satisfaction and fulfillment. I definitely want to do something in ministry down the road, maybe as a pastor if that’s where God leads.

StudentSoul.org: Your Taiwanese heritage is drawing a lot of attention because it’s so rare to see really great Asian American basketball players. And yet you have said that you’ve encountered frequent racism from fans when you’re playing. How have you learned to deal with the racial slurs?

Jeremy: First of all, when it gets to me and I get really frustrated, I don’t play as well. Second, the Bible message that sticks out to me is “turn the other cheek” and just forgive. That’s what I try to do. At this point, it doesn’t bother me anymore because I’ve heard it for so long.

Jeremy: That’s just part of sports. Fans try to do whatever they can to get in your head. I’m not the only one receiving really rough remarks. Other people are getting jeered, too. It may not be related to race, but some of the fans can be pretty brutal, including our fans.

StudentSoul.org: How have your Asian American brothers and sisters in the chapter responded to the racial slurs you’ve encountered on the basketball court?

Jeremy: It happens when we’re on the road, so no one in the chapter sees it. It doesn’t happen in our home gym.

StudentSoul.org: Your parents are from Taiwan but got you started in basketball when they moved to California. What has been their role in your life, both in terms of basketball and your faith?

Jeremy: It’s huge. They brought me up in a Christian home and taught me what it means to be a Christian. But the thing I appreciate most about them is they don’t judge my basketball performance on how I do individually in terms of statistics. They make sure that I have the right attitude, that I don’t yell at my teammates or the refs and that I’m always under control. It’s very helpful because when they watch a game, they don’t judge my performance the way the sports world judges it. They make sure I have a godly attitude when I play and when I don’t, they call me out on it and make me accountable. That’s just so valuable because win or lose, whether you play well or not, you want to reflect God’s image, and they hold me to that. For that I’m very grateful. I’m very blessed by God!

Read more about Jeremy Lin who has been featured in Time and Sports Illustrated.

In 2012, Jeremy Lin skyrocketed to fame. Follow the “Linsanity” in the article, InterVarsity in the NBA. Find out more about InterVarsity’s Athletes Ministry.