Jesus and politics at Grinnell College 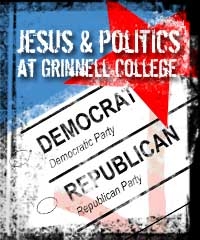 As a fellowship, we were finding our large group Community Worship meetings had become rather stagnant, in both content and participation. So we decided to change things up. Instead of singing worship songs that would be scarily unfamiliar to a non-believer, or even a non-regular-attender, we opted for a more conversational setting — coffeehouse-style discussion tables, large group discussion, easy-listening background music.

Students were invited to come and participate in open discussions about how Jesus might handle various political and social dilemmas. Political views were not promoted. Because the gubernatorial election had been the previous week, and because politics is generally of interest to most Grinnellians, we came up with questions and topics of discussion that had to do with the interaction of politics and religion. These questions ranged everywhere from tolerance of religious holidays to nuclear proliferation.

My favorite question involved an actual situation occurring in our area: “An Iowa correctional facility has welcomed a national faith-based prison rehabilitation program that has halved recidivism rates at other facilities. However, the program was recently challenged in court because it was primarily funded by government money. How would Jesus vote?” The idea was not to instigate disagreement but simply to get people talking about issues related to Christianity from a very practical real-world point of view.

Variety takes work. It’s hard to change. But we were all motivated to pull off this outreach event, fueled by a common passion. Before coming to Grinnell, I did not have this passion. My friends from home are primarily Christian and I never understood why I should talk to Unknown Non-Christian A about my faith. It just seemed weird. The first friends I made at Grinnell, however, were by-and-large not Christians. All they knew was from media misinterpretations or the broad cultural impact that Christianity has had on Western culture — in other words, they didn’t know much, and what they did know, they didn’t like. As I got to know these friends better, I began to understand where they were coming from — and how much they were searching. It is my love for them that fuels my passion for outreach. I saw this event as a relevant way to share with them my faith that means so much to me.

Some of these friends came, some didn’t. But by 8:00 pm, the room was packed — every seat was taken, and a few people hovered around the cookies and coffee. As we rotated from table to table, the hum of conversation, complimented by an outburst of laughter now and again, filled the air. Sherami Hinders, InterVarsity staff in western Iowa, led a large-group discussion about some of the questions, then shared her thoughts about the importance of following Jesus, not politics, as king. Everyone was asked to fill out a response card about the event. Overall, it was well-received: people were very positive, and several commented that they wished there had been more time for discussion. A few non-Christians also expressed interest in studying Scripture and learning more about Jesus.

The repercussions of this event were not just with the people who attended. I had conversations afterwards with two of my friends who had wanted to attend, but had not been able to. One of them, a political science major, avoids like the plague all topics religious. Any mention of any sort of religion and he is immediately uncomfortable and changes the subject. However, he was really interested in this event, and by telling him about the topics we had discussed, I managed to get him talking, albeit for just a short while, about his opinions and how he felt about religion from this political setting. Another one of my friends and I had a much longer conversation, and he too expressed interest in reading and studying Scripture.

By holding this type of event, we were able to experiment in new types of outreach. The coffeehouse discussion seemed to be an effective way to get people talking. Through more events like this, I pray that we as a fellowship will continue working toward building up the body of Christ.