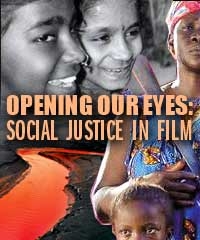 “Our InterVarsity chapter wants to have monthly movie night,” the email said. “We’d like to focus on the topic of social justice, but we’re having a hard time finding good films. Can you recommend any?” We gave that some thought and came up with a list of movies that deal with social justice issues.

Movies enable us to see the world through other eyes — a police woman, a mafia don, a World War II soldier, a jedi knight. Some movies have the power to do more: to lift us out of our self-absorption and show us the world in a new way. As film critic Roger Ebert has said, good movies make us into better people. We believe the following films — fiction and documentary — do this.

The email that prompted this resource list begs the question: what exactly is a “social justice” film? The term covers such wide-ranging topics as racism, unfair labor practices, religious bigotry, globalization, the war in Iraq, AIDS in Africa, and the destruction of the environment. With this in mind, we have thrown the net as widely as possible.

Born into Brothels is probably the best starting point for those wishing to investigate social justice issues further. The film follows photojournalist Zana Briski as she takes up residence in a red light district in Calcutta, documenting the tribulations of the women and children who live in this dangerous environment. Briski supplies the children with simple cameras to document their own lives; their photographs are eventually used to help provide them with an education. Some of the prostitutes here had perhaps originally been rejected by one of India’s traveling circuses, which are documented in Starkiss: Circus Girls Of India. Unscrupulous agents cross the border into Nepal, encouraging poor families to let them “hire” their daughters. Once in India, the “lucky” ones are forced to perform dangerous stunts for circus crowds; the others are unceremoniously turned out into the street. Several films give a voice to the millions of women victimized by female “circumcision” (Moolaade), religious oppression (Osama, The Beauty Academy of Kabul), and abuse (Domestic Violence).

Commanded to love our neighbors as ourselves, we often find it hard to love our co-workers and fellow drivers, let alone those officially deemed “unlovely” by our culture. Shakespeare Behind Bars follows several Kentucky prisoners as they work to stage a production of The Tempest. As the prisoners see the truth of their lives mirrored in the words of the Bard, we are moved by the surprising eloquence of the inmates themselves as they reflect on the nature of forgiveness and what it means to be a good person. When these men reveal their often shocking crimes to the camera, we are forced to ask ourselves: do we still care about them now that we know? Stevie explores the effect that years of parental, societal and institutional neglect has on an individual. If you’re feeling brave, a disturbing but excellent film is The Woodsman, which will test the Christian viewer’s claim that forgiveness and redemption are available even for the most wicked of sinners.

Before he became the filmmaker America loves to hate (or loves to love), Michael Moore made a documentary about the plight of autoworkers in the rust belt city of Flint, Michigan. A more muted version of the guerrilla filmmaking he would demonstrate later, Roger & Me explores the slow death of a community at the hand of callous General Motors executives. Heart-rending scenes of Christmas Day evictions are balanced by a sly sense of humor, as when well-meaning but clueless conservative celebrity Pat Boone comes to town. One of the great documentaries of all time is Harlan County U.S.A., which is the story of miners in Kentucky who strike and are subsequently brutalized by the mining company. Corporate greed (and its social aftershocks) is also the theme of Enron: The Smartest Guys in the Room, Wal-Mart: The High Cost of Low Price, and A Decent Factory (which deals with the Finnish company Nokia’s business practices in China).

Intimate documentaries aren’t the only films that deal with issues of social justice — sometimes even Hollywood uses its bombastic powers for good. Blood Diamond graphically depicts the horrors of Africa’s diamond trade (child soldiers, village massacres, and slavery) while exploring the Western marketplace that makes such inhumanity possible. Syriana, a particularly complex example of what have come to be known as “hyperlink” movies, is even more globetrotting, following its characters through hostile Beirut neighborhoods, Kazakhstani drilling fields, and rapacious American boardrooms. Lord of War looks at genocidal conflict around the world through the eyes of a single amoral weapons dealer whose desperate attempts at self-justification are a queasy reminder of America’s own role in global conflict via profitable arms sales. Dead Man Walking will cause anyone to reconsider the death penalty, and Crash suggests that racism isn’t so much something we’re raised with as it is an integral part of our society.

Required viewing for anyone seriously interested in racial reconciliation is Do the Right Thing, the greatest film about race in America (and frankly one of the great American films of all time).

Numerous excellent documentaries deal with the disastrous effects of globalization and environmental degradation on the world’s poor, including Black Gold (coffee production in Ethiopia), The Devil’s Miner (silver mining in Bolivia), Diamonds and Rust (diamond mining in Namibia), Manufactured Landscapes (industrial mayhem in China and Bangladesh), and the truly harrowing Darwin’s Nightmare (environmental havoc in Tanzania).

Finally, here is an international grab-bag of interesting films that deal (sometimes indirectly) with a potpourri of social justice issues:

The films mentioned here have the ability to enlighten and educate; they also call out for action. That could mean reaching out to someone different from yourself, changing your shopping habits, organizing a campus-wide event, or getting your chapter involved in the local community. Before watching any of these films, remember: increased knowledge of social issues increases social responsibility.

See how students are living out God’s heart for justice on their campuses in these videos from InterVarsity’s 2100 Productions.