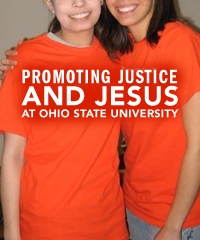 The enormity of the HIV/AIDS pandemic in sub-Saharan Africa is overwhelming, yet students at Ohio State got involved and did something about it. They raised money for orphans and raised awareness of the issues. They also raised the call of Jesus to follow his leadership and work for justice in the world. Many students acted in response to the global — and personal — challenges before them.

For two days in April, the campus of The Ohio State University was filled with people wearing orange t-shirts. This was one of several events hosted by the InterVarsity group to raise awareness of the human cost of the HIV/AIDS pandemic, especially the tragic effect on orphaned children. Each t-shirt worn by a student represented almost 5,000 children orphaned by AIDS in Africa.

A total of 2,500 students (five percent of the student population) bought t-shirts to wear on campus for those two days. This was a graphic demonstration of the five percent of children in sub-Saharan Africa who are orphaned by AIDS.

“The visual effect of so many orange t-shirts was stunning,” reports Ram Sridharan, InterVarsity staff. “I saw orange t-shirts wherever I went on campus and it created quite a buzz.” He heard reports of many faculty members who were asking questions about the event and discussing the issue in their classrooms.

During the two days, the InterVarsity students also set up four different interactive stations, called proxe stations, in the oval at the heart of campus. The theme of each one was connected to HIV/AIDS and the purpose was to generate conversations with other students about how Jesus and justice issues are connected. The interactive displays all pointed to living in a damaged world without Christ. The students hosting the displays invited participants to turn from their rejection of God’s leadership and the life he offers, submit to Jesus as leader and receive his healing, and then become actively involved with him in changing the world. 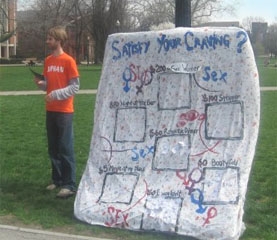 The proxe stations were creative interactive displays on these topics:

One of the highlights of the event was a broken bread poverty meal where a simple bowl of porridge was served to participants as a way to identify with those broken by the cycle of AIDS, poverty and hunger. The true, tragic stories of children orphaned by AIDS were told during the meal by a representative from World Vision.

After the dinner, the special guest speaker, York Moore, spoke compellingly on the difference between justice and charity. He explained that charity is often done in a spirit of condescension and relational distance, whereas a doer of justice actively works against the many principalities and powers of injustices in the world. He emphasized that Jesus Christ invites people to receive his love and be his light in the world, then challenged students to make a commitment to action.

Each person at the dinner was given two stones. Each white stone represented a commitment to use personal resources for justice. Each red stone was a commitment to follow Jesus and join his work for justice in the world. As two jars were passed around the silent banquet hall, the only sound was from stones dropped intentionally into the jars.

“The sound of the stones dropping into the glass bowls was mesmerizing,” said Rachel Shain, one of the organizers of the event. She watched as many students offered their stones in response to York’s dual call to commitment, realizing that some of the students were making decisions to follow Christ for the first time. “It was amazing to see the good news of Jesus being presented alongside the message of doing justice in the world,” Rachel said.

Hosting these events posed new challenges for many of the InterVarsity students. Some of them were very nervous talking about Jesus with those who stopped by the stations, bought orange t-shirts or came to the dinner. But Ram noticed a change in the students who volunteered. “Many of the first-year students in our group struggled with courage to speak with people,” he said, “but they were often the ones who led students to Christ.”

One of the leaders in the chapter agreed. “I was amazed at how easily the gospel could be made intelligible to those who don’t yet believe it, and I was even more amazed at the interest that people showed in the message of Jesus,” said Cory Shain. “I often associate evangelism with long, grueling, persuasive work, and this campaign truly corrected that assumption. As I saw hearts turn to Jesus when my friends and I explained him, I myself came to appreciate the wonder and importance of his message and the power of his kingship in a new way.”

Erik Bobbitt, also on the leadership team, talked about the process of selling the orange orphan t-shirts at a booth on campus. “One day at the shirt-selling table, I thought I heard the Lord say, Ask everybody, not just the ones you think are into social justice — but I was nervous. Why would I ask people who looked preppy or had iPods on? It was hard but, when I obeyed, I saw people in designer clothes and people on the phone stop what they were doing to buy and wear one of the shirts. I guess God knew what he was talking about, and he proved it to me. It was absolutely incredible.”

As a result of their efforts, the InterVarsity chapter has new members coming to the group. Younger members have learned the good news and how to share their faith, and some led others to faith in Christ. The chapter members are following up about 45 decisions made for Jesus and more than 30 who indicated an interest in a GIG (Groups Investigating God). Additionally, the entire campus has been made more aware of the HIV/AIDS pandemic, and valuable funds were raised for the relief work of World Vision around the world.

For these students, it’s all about the work of Jesus — and the work of justice — on their campus at OSU.

Read another story about students at the University of Montana who promoted justice and Jesus with orange t-shirts.