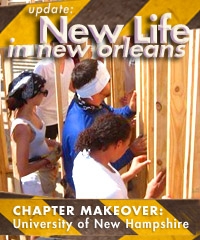 Throughout the year, God has been doing a major makeover on our InterVarsity group, moving us toward becoming a genuine witnessing community. The structural changes we’d made earlier were building momentum in our InterVarsity chapter at UNH. We began to dream big about God’s mission on our campus. But even our big dreams didn’t prepare us for what God would do when we spent our spring break in New Orleans for the Katrina Relief Urban Plunge (KRUP).

The last four years, our InterVarsity chapter has joined other New England schools to work in the ongoing relief efforts after Hurricane Katrina. This year, KRUP attracted a diverse group of students from UNH: Greeks, athletes, undergraduates, Christians, non-Christians. Together we shared long bus rides, construction projects, meals, meetings and conversations. We left New Hampshire wanting to make a positive change in the lives of people in New Orleans, but we returned to campus knowing that God had made major changes in us.

Our trip had three main goals:

The week before KRUP, at our weekly large-group meeting “The Edge,” we wrote prayers to God about what we hoped to see happen in New Orleans. This was my prayer: “God, please bring a renewed energy to our community and to our mission on campus.” I felt we needed a catalytic event to restart a movement that had seemed to stagnate in the barren New England winter.

In New Orleans, God responded to this prayer in ways we never anticipated. He was fulfilling what we called our milk and honey dreams.

Our chapter was growing in the number of students who embraced God’s mission on campus and took risks to advance the gospel of Jesus. Nearly all of these missional Christians in our group attended the trip. From the first day, God unleashed their passion for the lost on our KRUP community. Seven students woke up every morning at 6:00 a.m. to pray for their non-Christian friends to become believers. (They even dragged me, their sleepy-eyed staff worker, to pray, too!) Conversations about God reverberated throughout the work sites and bunkrooms as students intentionally tried to partner with God where he was moving in their friends’ lives. In the evening sessions, many students shared stories of how Jesus had transformed them.

After a personal testimony one night, a student in the audience, Jason, approached the speaker and told him he wanted this new life that his team-mate had shared about. That night, eight friends — both Christian and non-Christian — prayed with Jason to enter the Kingdom of God.

The next night, Jason stood in front of the entire group of seventy students and testified to what God had done in him the night before. Despite his past mistakes and struggles, he said, “I love God, and now I know that God loves me.” On the heels of Jason’s story, I made a call to faith from the story of Lazarus in John 11, inviting students to claim this new life Jesus offers them amidst a world of death. Eleven students publically stood in response! We were all amazed at the movement in the room as students pushed chairs aside and claimed new life.

The room was “a land of milk and honey” that none of us envisioned in our wildest dreams.

In the four weeks since KRUP, we have yet to have one week go by in which there is not a conversion somewhere on campus. A student-led GIG (Group Investigating God) full of KRUP students has begun on Monday nights. Many missional Christians are now meeting one-on-one with KRUP non-Christians to continue talking about the reality of Jesus in the world.

Missional Christians have begun taking “Jericho prayer walks” on Saturday nights, praying as they walk around campus buildings seven times to ask God to break down spiritual walls in the lives of their friends (Joshua 6). At a call to faith just before Easter, three students publically responded to the gospel and entered into the advancing Kingdom of God. All three of these students were from areas of campus that had been prayed for during a prayer walk.

God brought new life to our movement in New Orleans. We were energized by the eleven students that walked from death to life for the first time. Even more, God was renewing the passion and prayer of our missional Christians to reach UNH with the gospel. The mission of KRUP is not over — it’s continuing back on campus.