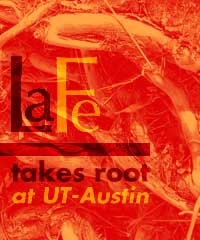 I was sitting in the cafeteria at Camp Buckner, eating my lunch with over one hundred other InterVarsity student leaders on our large campus. It was my first training conference as a new leader and I was nervous. But when I looked around for other Latino leaders like me, I only saw two — even though sixteen per cent of our student body is Latino. Why aren’t there more Latinos here, I wondered. Was God preparing me to do something about it?

This is the story of how our “LaFe” group, a Latino fellowship of InterVarsity, began at the University of Texas at Austin.

My InterVarsity journey began the fall semester of 2003. Several friends invited me to attend the large-group meetings of Texas Gospel Fellowship (TGF), a mostly black fellowship that had started two years earlier. There were three other InterVarsity fellowships on our campus: the multiethnic Texas Christian Fellowship (TCF), Asian American Campus Ministry and a South Asian fellowship called OneWay.

Even though I had a strong foundation of faith, it was TGF that challenged me to grow deeper in love with Christ. At the end of my sophomore year, I jumped into a leadership position to serve the fellowship. But God had a greater plan.

The Lord opened my eyes to the need for Latino ministry at UT through two new friends, Henry and Andrew. Henry lived directly above me in my apartment complex and we became good friends. He had a huge curiosity about scripture which led to many fascinating conversations about God and the Bible. He also struggled with deep personal issues and desperately needed a message of hope. I longed for him to be surrounded by other Latino believers who could relate to his doubts and fears and also encourage him in his new faith.

I met Andrew in a study group for a history class. He was a senior who came from a Christian home and grew up in church, but once he arrived at UT he never connected to a local church or campus organization. Yet I could see how much he needed and desired a spiritual community. He really wanted to share his life with other Christian friends, but he never found a group he was comfortable with. This really troubled me.

“Some people don’t have a place to go where they can surround themselves with others who are awake in their faith,” Andrew observes. “It’s easy to see how they continue to “sleep in” spiritually. I was one of those people,” he admits, “until LaFe — and then I stopped hitting the snooze button.”

The spiritual needs of these two Latino friends and my vision to see more Latinos in leadership led to a lot questions and conversations with God, my staff worker and others. I decided to walk forward with this need and new passion — in spite of my fear. I agreed to lead a LaFe small group the following school year. We also set a goal for winter break of sending at least two students to LaFe04, the first-ever LaFe National Student Conference.

At the beginning of the 2004 school year, Henry, Andrew and I took all the steps necessary to begin LaFe on our campus. I was glad that Andrew returned as a fifth-year senior. We publicized our new small group during New Student Outreach, hosting the first meeting in a lounge of Jester, one of the largest dormitories in the country. As we waited for students to arrive, we soon realized that nobody was coming, so two of us went to the dorm entrances and began inviting students upstairs to our Bible study. At the end of the night, our first official LaFe Bible study recorded a dozen new students!

We met weekly for small-group Bible studies and had many interested new students check out our fellowship. As we grew, we saw many students deepen their love for scripture. Since LaFe was a new ministry, we didn’t have a LaFe staff worker but we did have the guidance of other staff and support of our four sister fellowships. Our InterVarsity family at UT and a local church financially helped send me and another student to LaFe04.

LaFe04 was an amazing conference that clearly illustrated what a group of dynamic Latino students on mission for Christ could look like. I returned from LaFe04 with a better sense of my own identity as a Latina and a greater understanding of God’s work through LaFe ministry.

Our fellowship has grown and deepened in the last three years. We have weekly small groups, prayer meetings and a large-group meeting. Sometimes it’s hard — we have shared ministry frustrations, disappointments and exhaustion. But there have been many joyful moments with tons of familia time, and we all have gained wisdom as young adults in Christ. Through it all, God’s hand has been on LaFe at UT the entire time.

Through LaFe, we have seen students give their lives to the Lord for the first time. We’ve seen a hunger for scripture from both Protestant and Catholic students. Many students have stepped into a variety of leadership roles. Two of us, Lacey Rodriguez and I, have graduated and are coming on InterVarsity staff in full-time ministry positions. I am very excited about the ten students planning to attend LaFe07 and the vision for ministry they will bring back on campus.

LaFe at UT is still growing, and the group keeps trying to figure out how to become an influential presence in the Latino student community. This year God has raised up five new young leaders to carry the ministry forward. When Adriana, a current LaFe leader, went to Urbana 06, God enlarged her heart for the fellowship and its mission. “I hope that UT-LaFe grows in unity and love as much as numerical growth,” she said.

So much has happened since that day in 2004 when I looked around, searching for Latinos who want to live boldly and humbly for Jesus on our campus. I asked God where they were, and now I see them all around me. We are here.