A familia de Cristo: LaFe gets started at UT-Pan American 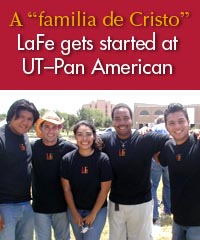 When God loves a campus, watch out. Carlos, Abbey, and Aaron are three students with an amazing story of how the Lord is doing a new thing on their campus. They just met each other this fall, but God has obviously connected them for a reason. Through their leadership, a new InterVarsity LaFe chapter has started at UT–Pan American.

Carlos Lopez was in the school chapel during the first week of school, praying to find a Christian fellowship on his campus. He could not have imagined how God was about to answer his prayers.

Carlos had become a Christian less than a year earlier and was eager to connect with other believers when he arrived on campus in the fall. “I wanted to find a group that wasn’t just a Christian social club,” he said. In the chapel, a guy named Nick Dombrowski introduced himself and told Carlos that a new group was just forming that would be an active, witnessing community at UTPA. At first, Carlos was a little hesitant and wanted to pray about getting involved. The next night Carlos and Nick met for coffee and Carlos asked, “Okay, what’s the plan?”

In the first weeks of building this new fellowship group, Carlos has become one of the core student leaders with a vision to reach the UTPA campus with the good news of Jesus. The school is located just twenty miles from the Mexican border and has a growing student population of 17,000 students, 93 percent of whom are Mexican-American. “I love the different cultural and spiritual backgrounds of everyone in the group,” Carlos reports. “It creates a synergy that helps me grow in my faith.”

Abbey Muniz is another student who has been pivotal in getting the group organized. After talking with Nick, she was so excited about the mission of InterVarsity that she signed the necessary papers to get the group registered as a student organization, becoming the first official InterVarsity president.

“I wanted to help get InterVarsity LaFe off the ground because I know it would be a blessing to the whole school,” Abbey said. “I want to reach everybody and InterVarsity can help us do that. It also provides such a close community of believers and emphasizes serving God with our whole lives.”

Nick Dombrowski is the InterVarsity staff member who felt called to the UTPA campus to serve the Latino students there. When he arrived in Edinburgh, TX, he quickly saw that the Lord had already been working before he ever set foot on campus. Within Nick’s first week, he had discovered a chapter president, a core group of excited students, a faculty advisor, and relationships with community and church supporters. After only a few months, this growing group has about 30 committed members, several regular Bible studies, and an active outreach.

Aaron Ford got involved in the group after seeing a flyer on campus. He called the number (Nick’s cell phone), and asked if this was InterVarsity Christian Fellowship. When Nick said yes, Aaron replied, “Oh good! I want to get involved! People at my home church told me they’d shoot me if I got involved in anything besides InterVarsity.” Aaron’s magnetic and welcoming personality has been instrumental in drawing others into the chapter.

Some of the students in the new group came from a church Bible study that was led by man who had been in InterVarsity elsewhere and was eager to see a group get off the ground. Three Bible studies have quickly started on campus. One of them is in the brand new dorm on campus, Unity Hall, and has 13–15 members. The Hall Director, Desiree, knew about InterVarsity from InterVarsity alumni at her home church. She is regularly attending the Bible study and is even promoting it in her hall.

Positive relationships are developing with university administrators. The Director of Residence Life said, “InterVarsity is one of the best organizations we’ve ever worked with. The publicity is excellent and the student leaders are high quality.”

Developing leaders is important to InterVarsity and the university, and they are partnering together. The university sponsors an elite leadership program for twenty top campus leaders. Daisy is one of the student leaders in the program. When Nick met the graduate student in charge of the program, he asked Nick to mentor Daisy as part of the requirements for Daisy to be in the program. Nick and Daisy meet together regularly and study Scripture to learn more about the leadership style of Jesus.

For Jacqui Torres, the LaFe group helps her connect to people that will help her grow spiritually. “I see it as my family away from home,” she says. “They’ll support me and I can rely on them.” She adds, “I’m just glad that I can be a part of something that is reaching out to people who don’t know him. It’s just awesome.”

For Carlos, Abbey, Aaron and others, the fall semester has been a surprising journey of discovering how to start and build a campus fellowship group. “Every time I go to meetings I see people who are really interested and who love God, and it pushes me further to think of what I can do,” Abbey says.

“The strong relational bond we have with each other and with God is amazing, and I love learning how to grow in my faith with others,” Aaron summarizes. “We’re a familia de Christo.”