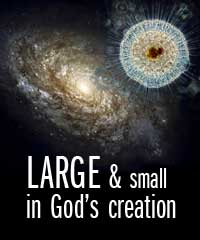 Near the end of the movie “The Incredible Shrinking Man” (1957), the main character, Scott Carey, finally accepts that he is growing ever smaller. As he shrinks away, he realizes that there are intricate worlds, incredibly large and vanishingly small, all under the care of an amazing Creator. Take a break from the books to recognize the same thing — to gaze into a starry sky that tells the “glory of God” and to kneel down in the grass in order to “go to the ant” for wisdom.

The Large: Astronomy Picture of the Day

This site may be familiar to you, but if not, be sure to check it out and bookmark it. While it’s a simple website, the images can be profound. Savor it once a day as a treat, and occasionally allow yourself to go backward to the ones you might have missed. View more in the archives.

More of the Large: the Hubblesite gallery

This gallery of grandeur is purely about the Hubble space telescope. In some ways the quality of these images surpasses the APOD site above, partly because the APOD site uses historic, land-based images as well as others. The Hubble images are enhanced for various reasons. The nebula collection is gorgeous and worth gazing at as you ponder the amazing power of God’s ability to speak galaxies into existence.

The Small: a look at tiny intricacies in nature

Mark Plonsky’s gallery includes some fascinating and fun insect and spider images. While they may creep you out, try to focus on the complex structures of eyes and wings, design and beauty. Igor Siwanowicz’s gallery focuses on the more whimsical and bizarre examples of God’s creation. God was indeed having fun in making some of these creatures.

Stuff that’s alive gets even smaller, as these galleries show. The Microangela gallery at the University of Hawaii shows images from scanning electron microscopes that include the stuff that lives on us! The Molecular Expressions photo gallery goes even smaller, and includes some very artistic and colorful images from the structures of molecules and crystals. Want to know what your burger and fries meal really looks like? Nah, you don’t.

God by the numbers

The concepts of large and small in relationship to God aren’t just about big and tiny objects. God’s creation is highly connected to the math of physics. So for you math and science types, here’s a fun read by Charles Edward White about some of the numbers and quantities that are important to our life and existence. As the author puts it, “Today, numbers from astronomy, biology, and theoretical mathematics point to a rational mind behind the universe. To be sure, they do not point to the personal God of the Bible as such. Yet they are not inimical to the biblical God, either.” Take a look and decide for yourself.