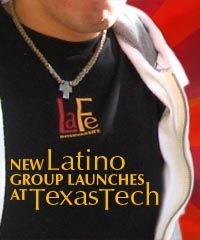 One year ago, I was sitting in a dorm lounge, praying. It was just thirty minutes before I was hosting the first InterVarsity Bible study for Latino students at Texas Tech, and I had no idea how it would go. I had randomly picked a time and place for the first meeting, so when that day came, I jumped in with faith that God wanted a new Latino ministry to start on our campus. What happened that night was a miraculous surprise… .

As I was praying in that empty lounge, a student walked in, sat down and took out his books to study. Worried that our Bible study might interrupt him, I said, “Hello, we’re about to have a Bible study — will we bother you? It looks like you want to study.”

“A Bible study?” he responded, enthusiastically. “Can I join you?”

I wasn’t exactly anticipating this response. Taken aback, I said, “Um, well, of course! It’s for Latino students, so …”

“I’m Latino! I’m from El Paso!” he interrupted me.

And that’s how I met Salvador.

Little did I know, God was working to orchestrate events that I never could have planned, even if I had tried. The Lord was beginning a new LaFe ministry at Texas Tech so that Latino students could know him better, and make him known on campus. As I learned more about Salvador, I realized how God had been shaping the events of his life, leading and preparing him for our divine appointment on that Monday night in the dorm lounge.

During Salvador’s freshman year of high school, another student tried to get a Christian group started, but she was having a hard time. Then Sal showed up. Before long, the Bible study grew and Sal was the group president for his remaining three years of high school. During that time he learned a lot about leading a Bible study, reaching out to new students and trusting God to get something started.

When Sal came to Texas Tech, his pastor asked him, “Salvador, have you considered doing ministry to reach out to Latino students?” This was a concept that had not crossed his mind. He began praying about it, however, and that’s when our paths crossed. God brought Salvador and me together to start a Latino Bible study on our campus.

Last spring, when Salvador was a freshman, I challenged him to take a step of faith and become a small group leader with InterVarsity. He was very hesitant at first. Sal recognized this would be a big responsibility and some of his priorities would have to change. He was already involved with numerous campus organizations, including a popular spirit and leadership organization which consumed most of his time. He had worked very hard to become a member of this influential group and it was a difficult decision to leave it. But, as God worked in Sal’s heart, he realized that the Lord was calling him to make a lasting impact on campus through leadership with InterVarsity.

This year Sal and I co-lead our Latino student small group which has almost fifteen members. Two of them are new believers. Sal and I continue to pray for God to raise up Latino students to be spiritual leaders among their peers, and the Lord is doing just that!

Our first answers to prayer for Latino leaders were Carolina, from Ecuador, and Chris, from Texas. I recently talked with them to give them a vision for leadership among Latino students through InterVarsity. They both feel called to leadership but asked for more training. Now I meet weekly with Sal, Carolina and Chris to study Scripture together and allow God to develop us as good leaders.

Recently Chris started a weekly prayer time on Tuesday mornings at 7:00 a.m. He shared his vision for prayer with the small group and has been leading our prayer meetings every week. We pray for our campus and for the unreached Latinos at Tech.

Many of the students in our Bible study are also involved in the Spanish-speaking society. This club is a place to meet other Latino students and develop relationships. They are hoping for opportunities to share the gospel.

Now our Latino Bible study is planning an upcoming outreach aimed specifically for Latino students on campus. This is a huge step for a group our size, but everyone is involved and committed to the mission. They are thinking of new ways to reach other Latinos with the gospel and they’re taking courageous risks to follow God.

So much has happened since a year ago in the dorm lounge, when I was apprehensive and praying for God’s work in students. Now the new Latino ministry is flourishing at Tech, and it is way too much fun being a part of it. Thanks be to God!