Lessons from an agnostic 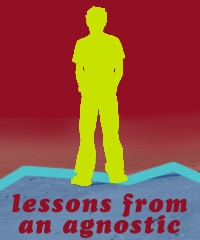 I have friends from many different religions, and I love exploring their religious teachings, cultures, and music. As a Christian, I found I have a lot in common with my friends from other faith traditions, especially in doing service for others. But it was an agnostic who opened my eyes to the uniqueness of Jesus Christ, and I will forever be grateful to him.

When I came to the University of Illinois as a freshman, I had already become a follower of Christ. However, my faith did not quite match that of my fellow Christians in the InterVarsity group. Though we attended evangelism workshops and participated in outreach activities together, I was not convinced of the uniqueness of Christ. Jesus was amazing and I enjoyed being his follower, but I did not believe that he was any greater than the faith leaders of other religious traditions. I had countless friends who were from Muslim, Hindu, and Jain backgrounds, and they were all as devout in their faith traditions as I was in mine. Furthermore, they were incredibly kind and generous, and I often found myself in awe of the quality of their characters.

The word “evangelism” was definitely not a word in my vocabulary and I was often uncomfortable with the label “evangelical Christian.” I was happy to simply share my faith when asked and avoid discussing difficult religious topics if I could. I enjoyed reading Muslim mystical poetry, listening to Hindu bhajans and contemplating the teachings of the Buddha.

During my junior year, I became more involved in an organization called Interfaith in Action. Interfaith in Action was a student group on campus that brought religious young people from a variety of backgrounds together to serve in the local community and then talk about how their faith traditions inspired them to help others. This was right up my alley and I happily signed up for their National Day of Interfaith Youth Service.

My group of student volunteers went to the local food pantry. We talked and joked with one another as we sorted through bottles of shampoo, stacked boxes of chips, and arranged bags of snacks. Afterward we returned to campus and began sharing how our faith traditions had inspired us to serve others. I loved listening to others read from their holy writings about service and hearing how their religious backgrounds encouraged them to help other people.

It was at the height of our conversation that a young man sitting next to me raised his hand. “Hi,” he said. “I’m an agnostic and I just have to say that it is really cool that all of you religious people are getting together and talking with one another. However, I’ve noticed something as you read all these scriptures from different religions. They all talk about service, but they say you have to help other people so that you can become saved or enlightened or whatever. I guess I think that still sounds a bit selfish.”

It was at that point that I chimed in. “Well, I’m a Protestant Christian and my faith tradition says that there is nothing we can do to be saved. Salvation is a free gift from God through Jesus Christ. So any service I do is simply a way of expressing my love to God and saying thank you for what he has done for me.”

He nodded for a moment and then said, “That’s pretty cool. Can anyone else say that?”

The circle was silent. No one else had a response for him. After several moments of awkward shuffling, the group leader shifted the conversation and our dialogue started back up again.

I, however, would never be the same. I do not know what happened to that agnostic student. There is nothing to suggest that he ultimately joined a church or became a follower of God. However, his question had opened my eyes to the fact that Jesus did bring something that no other faith could bring — an assurance of a deep and eternal relationship with the living God.

I remember how I used to shy away from speaking about faith unless asked, but now I find myself excitedly engaging people in spiritual conversations and talking about my relationship with Christ.

Today I still enjoy reading Muslim mystical poetry, listening to Hindu bhajans, and contemplating the teachings of the Buddha, but none of these things, not one, holds a candle to the beauty, power and truth of meeting with Jesus Christ in his word and in prayer. He alone invites us to “Come, all you who are weak and heavy-laden, and I will give you rest” (Matthew 11:28). I am honored to serve as his disciple.