An Egyptian American on a journey 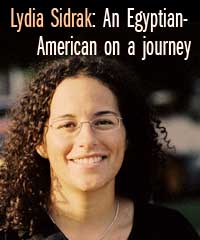 Lydia Sidrak grew up on the East coast in the Coastal Carolinas, but she has family scattered across North America and in Egypt. Ethnically Egyptian, Lydia is pursuing a journey of discovery and identity as she considers her upbringing and examines how her several trips to Egypt have given her insight into who she is as an Egyptian American.

StudentSoul.org: Lydia, tell us a little more about your ethnic heritage, and how you would describe the identity journey that you’re on.

Lydia: I am second generation Egyptian American Christian. Both of my parents, who are Egyptian Christians (also know as Copts) immigrated to the States in the 1970s. I was born and raised in the United States.

My journey to identity? At times, it has been remembering that I am Egyptian, or trying to understand what being Egyptian is. Or, honestly, not giving up the journey because it is not as simple and painless as I think it should be.

StudentSoul.org: How did you sense your ethnic heritage as you were growing up?

Lydia: I guess it’s kind of silly, but I don’t think I had a very clear sense of my ethnic heritage growing up. I had some sense that there was something different about me and how I was raised. For example, we ate different food (Dad sent me to school with a PB&J pita once), and there was a little bit of Arabic spoken at home. I also remember that a lot of my mom’s jewelry ranged from ancient Egyptian art to religious art like crucifixes and Virgin-and-Child pendants. And, at times, my parents seemed much stricter than my friends’ parents with issues like spending the night at friends’ homes, and also their speaking into life decisions such as college and career. However, because we didn’t live in an area with a lot of Egyptians, there seemed to be this “bubble” of oddity that I just attributed all to my family. Also, my parents didn’t really talk about Egypt that much. Maybe it was because they were trying hard to assimilate into American culture (which would account for the minimal Arabic spoken around our home), or maybe it was just painful to talk about having to leave family and friends.

StudentSoul.org: Recently you were in Egypt to visit family. How was this trip similar to or different from other times when you were younger? What are you noticing now that you’re older?

Lydia: Like previous trips to Egypt, the majority of the recent trip was spent hanging out with family, eating a lot of very good food, dealing with the language and cultural barriers — things like that. I had a few “aha” moments, too. Some of them were small and random things, like realizing that my parents bought certain types of food growing up because they resembled certain Egyptian foods, such as cucumbers and Pepperidge Farm cookies. As I look back I realize now that my Mom’s incessant need for me to be very dressed up when going to church or visiting family friends was because, in Egyptian culture, everyone is always dressed to the nines. No slouchy jeans and t-shirt stuff here. I think also that a book I read on the history of Cairo gave me a better sense of Egyptian culture and history, along with what it must have been like for my parents to grow up in Cairo and why they would have wanted to leave.

I feel like I got much closer to my extended family during this trip. It’s amazing and encouraging even though we see each other quite rarely — three or four times these last fifteen years. I also realize how knowing and being accepted and loved by them made me feel less conscious of my “non-Egyptian-ness.” One of the best memories I had from this trip was sharing stories with my cousins at how much our moms — my mom and her sisters — are similar in habits, facial expressions and sense of humor. It was very encouraging to feel that connection.

StudentSoul.org: What internal or family obstacles, if any, have you had to overcome to help you validate your identity?

Lydia: I tend to struggle with feeling too Americanized, that I’m “not very Egyptian,” because I don’t “look like” people who I perceive to be “very Egyptian.” I realize I have developed all of these ideas of what a Coptic American should be: they should speak a lot of Egyptian Arabic, or they should be Coptic Orthodox, or they should be an engineer, a pharmacist, or a doctor. Much of that has not been my experience, so if I’m not careful I can feel less Egyptian.

Almost all of my family is Coptic Orthodox, that is, Egyptian Orthodox, which is the majority denomination of Christianity in Egypt. However, there was no Coptic church close enough for us to attend where I grew up, so my mom, wanting my sister and I to grow up in a church, took us to a Pentecostal Free Will Baptist church a block from our house! As a result, all of my faith journey has been in the Protestant church. The Orthodox church is a major part of the ethnic identity of my entire family, and of most Egyptian Christians. For me as a Christian, this starts to become confusing — how much of my faith intersects with my ethnic identity? If I am a Christian, but am not Coptic Orthodox, does that mean I’m not a “true” Copt? Should I attend a Coptic Orthodox church because that is where the Copt community is, or do I choose a church for teaching, ministry, worship etc?

This can get kind of painful — sometimes you feel like you don’t belong in your “own culture” — that it should feel more “natural” to be Egyptian and American and Christian at the same time. I have often gotten overwhelmed and have resolved to just bury the issue or forsake my Egyptian-ness because it just seems like the easier route. But when I visit family, hear Egyptian Arabic or Middle Eastern music, it pulls me back to the realization that my identity is really important to me.

There have been times when I believe God has divinely encouraged me along the way. I realize I tend to think that this journey is just me trying to figure out my issues or make sense of my culture and experience. But I believe that my ethnic identity is very important to God. Even when I have given up, I feel like he keeps bringing it up with me in surprising ways. I have to remember that He made me, and made me to be the daughter of my parents, and made me to be born and raised where I was.

StudentSoul.org: What encouragement would you offer a college student or young adult regarding exploring their ethnic identity? What would you warn them about?

Lydia: Do not be discouraged if exploring your ethnic identity is more complicated than you think it should be, or if your experience and ethnicity doesn’t look like that of everyone else’s in your ethnic and cultural circles. Unfolding your identity may be a lifelong journey. You’re not the only one who’s dealt with identity conflict — check out Moses! God cares deeply about this. He knows you and, who knows, maybe he wants to use this part of you in a specific way to further His purposes in the world.

Enlarging your worship culture
Multicultural worship is worth the effort. Here are some ways to expand your experience.

Join with students around the world to pray for God’s Kingdom on campuses in every country – including your own.