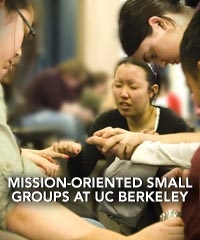 When I was a student at UC Berkeley, the small groups in our InterVarsity chapter were struggling. The Bible studies in the freshmen dorms were growing, but the other groups lacked enthusiasm for evangelism and lost juniors and seniors. By changing the structure and focus of small groups, we engaged the campus in new, creative ways. It all began with a single, experimental small group focused on social justice… .

When staff intern Wendy Hu-Au began a Bible study that focused on justice issues, she had no idea what a huge ripple it would create. In spring 2005, the new small group began meeting week in Berkeley’s Canterbury House, a residential program for students interested in social justice work. As the students studied the book of Esther, they became passionate about seeking justice in the midst of modern-day genocide happening in Darfur. They began attending weekly meetings for STAND (Students Take Action Now for Darfur), building relationships with many other activists on campus. Eventually, the small group helped to organize a campus-wide demonstration to raise awareness about Darfur.

As students in the small group explored what the Bible says about justice, more conversations began to happen with non-Christian students in STAND, as well as other justice-minded students on campus. Furthermore, the entire fellowship was influenced by this small group and began to move towards a deeper understanding of God’s heart for justice. It became clear that focusing a small group on a specific interest or mission not only had strong personal benefits for the students in the group, but also for our Cal Christian Fellowship — and even the whole campus.

What began with this one group grew to five campus mission-oriented communities last year and to seven this year. All of these groups have grown organically out of the passions and interests of students in the fellowship. These groups (read more about them here) are in addition to the missional Bible studies in the dorms:

The name “mission-oriented community” reveals one of the major philosophies of these small groups. In CCF, we have shaped our small groups so that what brings students together initially is a common sense of mission or purpose rather than a random similarity, such as being the same year or class in school (our old structure). In the campus context, we saw that community could not be contrived by putting people into the same room, but must happen organically as students pursue a common vision and share similar passions and interests. Thus, community is born out of a common mission and purpose, rather than vice versa.

In many ways, these mission-oriented communities are not too different from our previous small groups. Each group still focuses on weekly Bible studies, application of these studies, community growth and prayer. However, the main difference is the contextualization of these studies and their application to engage a specific community or need on campus, such as the activist community, ethnic student organizations or engineering majors. The growth of the small group community comes as they reach out on campus and take risks together, and there is a strong sense of communal identity and purpose that holds these groups together.

As a result of these small groups, students are now much more intentional in the outreach they do and CCF students are engaging the campus and community more deeply than before. For example, there are currently five decals (student-taught courses) being led by students in our fellowship, including classes on human trafficking, community development, female sexuality, and micro-finance. In addition, we have seen students partner more deeply with other organizations on campus and gain trust with non-Christians. In fact, InterVarsity has gained such a strong reputation with much of the campus community that we are often invited to represent the Christian perspective in various interfaith dialogues and activities. Students in these small groups are partnering more deeply with local community organizations. While the previous small-group structure struggled to grow a community for the sake of evangelism, our mission-oriented communities have opened a door for evangelism and campus engagement because it’s a central factor in the development of communal identity and purpose.

In addition to strengthening the growth of mission in our fellowship, our mission-oriented communities have also created a deeper sense of partnership and integration among our students. In the past, students who were active members of other clubs or organizations often felt unsupported by other Christians, and ended up feeling isolated or marginalized in our fellowship. With the growth of mission-oriented communities, they now have a community to support and pray for them. They have a safe, open space to bring their friends from their classes or other clubs. They no longer feel alone when they participate in activities outside of the fellowship “bubble” and have more friends to invite to chapter activities. Mission-oriented communities, therefore, help students gain a more holistic — and less compartmentalized — view of their faith.

As senior Jennifer Chiang states, “My interest-based small group has given me a community for outreach on campus. I don’t feel the disconnect between my faith and my other passions anymore because there’s a whole group of people who are right there with me.”

Limitations of the structure

Despite many of the benefits of mission-oriented communities, the transition from class groups definitely has not been easy. One of the biggest struggles has been with the Bible studies which must be contextualized to the focus of the small group, and leaders often struggle to be faithful to the inductive Bible study method, in which major themes emerge from the text rather than having themes imposed on the text.

For example, when Jennifer Chiang leads her group, she notices that “inductive Bible study is a very bottom-up process, but having a theme-based small group seems to call for a top-down approach in organizing the group.” She adds, “Figuring out how to reconcile the two has been a struggle.”

Because of the nature of these small groups, leaders also have many more components to juggle and finding a balance is often difficult. On a regular basis, they must navigate differences in opinions and philosophies about outreach and evangelism. They must also be mindful of how to move students forward in mission, and they are trying to develop relationships and partnerships outside of the fellowship. All the while, they are encouraging the spiritual growth of their members while establishing a sense of community within the group. Balancing all these different components is often difficult for leaders, resulting in groups with strengths in some areas and clear weaknesses in others.

Another difficulty is that it often takes time, especially in the fall, for students to choose a group where they fit. It can take longer for these groups to gain momentum and develop a sense of consistent community.

Overall, mission-oriented communities are much more dynamic than static. They are often unpredictable and constantly in flux, depending on the passions and visions of the people in the groups. When there is strong momentum forward, this is often a positive thing, and small groups — like the social justice group — have been thriving. However, it can also be difficult to sustain certain groups, especially if the main leaders or visionaries of a certain group graduate or move on. It is imperative, therefore, that the staff and students are constantly in communication and are open to taking risks, being flexible and even “failing,” in order to become a more authentic and missional community.

When I was a student in CCF, I dreamed of the day when each small group in InterVarsity would have students committed to intentional outreach. Now I’ve graduated and I’m serving the fellowship as InterVarsity staff. We’re in our third year of transition and I am amazed at God’s faithfulness, even when we have experienced various failures, or have unanswered questions. Through it all, we have become convinced that God is the one who is at work, drawing people to himself, and it is only by the transforming work of the Holy Spirit that we see fruit in our small groups.

One leader, Tiffany Liu, has observed this in her small group. “As we grow closer and witness God’s work in each other’s lives, we see God’s grace and power in more places and in more people,” she said.

Sometimes, following in God’s work means making changes to our human-made structures and institutions, to “prepare the way” more adequately for the work that he is doing. But as we continue to surrender control and follow his lead, we are seeing students and faculty transformed, our campus being renewed, and world changers being developed.

Thanks be to God!