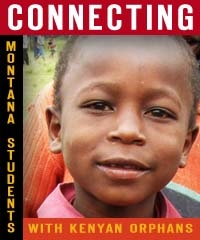 After a summer in Kenya, Melissa Berry returned to school forever changed. Because she taught in an orphanage, she could no longer ignore the staggering statistics of the HIV/AIDS pandemic. “To me, those numbers had bright faces, wide smiles and little red sweaters,” Melissa recalled. Here is how her InterVarsity chapter mobilized students at the University of Montana to go beyond the impersonal statistics and do something about it… .

Once God shows you something, you somehow become responsible for it. This was my growing conviction after I returned from InterVarsity’s Global Project trip to Kenya in the summer of 2007. I couldn’t forget the things I saw and the people I met. Even now, a year later, God is still revealing truth to me through that experience.

During my summer in Africa, I fell in love with the children I taught in an orphanage. When I went back to school in Montana, I felt very helpless and wondered what I could possibly do for them, being so far away. They were my new family and I wanted to stay connected with them. I prayed that God would open doors for me either to go back someday or to have some kind of continued connection with them, despite the distance between us.

My prayers were quickly answered. Our InterVarsity group sponsored a campus-wide mission to raise awareness and funding for children affected by HIV/AIDS in Africa. Together we raised $2,000 to buy a generator so the orphanage I visited would have electrical power. Watching the campus respond brought me full circle in my journey which began when I left the University of Montana and found myself on a different continent, surrounded by smiling children who ate and studied by candlelight.

Out of campus, into Africa

“I’m really in Africa,” I thought as I gazed through the window at the fiery sun setting on the rugged Kenyan farmland. My brief surreal moment was quickly interrupted by children in tattered, red sweaters grabbing my fingers and pulling me toward the dinner line and the big pot of food made by the older children. I found a seat on the faded blue wooden bench next to the little ones who had taken a particular fancy to me, maybe because I looked so different. Another college student, Dani, and I were the only mzungus (white people) in the room, but in the candlelight, we all looked closer to the same color.

The lively cafeteria was crammed with 150 children eating their dinner of rice and beans. After dinner, the children gathered their homework for evening study time and separated into their respective grade levels around their tables. Because of a broken generator, candles were passed around the humble cement room and the children took turns working or reading, their faces glowing in the soft light. 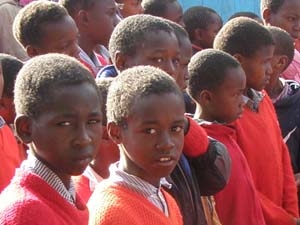 This was the nightly scene at Neema Children’s Home and School, about three hours north of Nairobi, Kenya. All 150 children are AIDS orphans and, by the grace of God, all are HIV negative. They are all cared for by “Mama,” a woman who took in two orphans ten years ago, and hasn’t stopped since. She ensures they are fed, safe, educated (with the help of her teaching staff) and loved. For these 150 children, Mama plays the role of mother, father, teacher, director, discipliner and caretaker.

Dani and I were assigned to teach English, math, Bible and physical education to these children for three weeks. I learned so much about neema, which means “grace” in Swahili. We depended on God’s grace daily to show us where to serve and how to love the 150 orphaned children. The Neema community quickly became my family as we lived together, connecting in the body of Christ. They were my new brothers and my sisters. I left a little piece of my heart with them when I left to go back to school in Montana.

Out of Africa, into campus

My college campus is an active one. The University of Montana not only offers plentiful outdoor activities but is also active in social justice and other issues. There are frequent protests, rallies or demonstrations over issues that students feel passionately about. I don’t always agree with the issues, but it is great to see students being active and caring about something bigger than themselves.

Because of this, our InterVarsity chapter wanted to get conversations going about the intersecting worlds of social justice and Jesus. As a witness to our campus, we wanted to tackle a social justice issue that God cares about.

The social justice team in our chapter suggested a World Vision campaign called "Do You See Orange?" The campaign is built around the statistic that 1 in 20 children in sub-Saharan Africa are orphaned due to HIV/AIDS and brings this statistic to life by selling bright orange t-shirts with “orphan” printed on them. When we matched the statistics with our campus population (1 in 20), we figured over 800 students would be orphans. Participating in this project meant we’d have to sell over 800 t-shirts — and get students on our campus to wear them all week.

The profit from our t-shirt sales could go to any AIDS charity, so I proposed the money go to buy a new generator for Neema, a cost of about $2,000. What better way to use the money than on real children orphaned by AIDS, like our shirts represented? The gift of electricity to Neema would not only meet a need of theirs, but would also communicate that a bunch of college students half a world away cared about them. I thanked God for the way he was answering my prayer to stay involved with Neema.

Suddenly orange shirts were everywhere on campus, and many students who participated were surprised that it was sponsored by a Christian group. We saw God’s blessing in so many ways through our campus outreach:

The impact of the campaign on campus was clear; you couldn’t help but notice all the bright orange shirts worn by students, faculty and staff. But the campaign had a deep impact on my life personally.

During one of the first days of the campaign, I saw a total stranger in my yoga class wearing one of the bright orange t-shirts and I was suddenly overwhelmed with joy. It was one thing to see my fellow chapter members wearing orange t-shirts, but a stranger in my yoga class? Someone I had no relationship with was wearing an “orphan” t-shirt representing one of the dear orphans I met in Kenya. The support and care shown by students on our campus was beautiful; it was beautiful to see how God mobilized people on my campus to care for people they had never met, and beautiful to see how God works in connecting people in his global church for his common mission.

We did raise $2,000 for the generator but, due to security issues at Neema, Mama decided that getting a generator would put her at a greater risk for thieves to steal it. She decided instead to get an entire solar-powered system to light the facilities. Last December, Mama was presented with a $2,000 check personally delivered by Brian and Debbie Lee, InterVarsity staff, who were in Kenya to set up another Global Project.

This summer Brian wrote to me, “We visited Neema yesterday. Mama is having the solar-powered system completed. An electrician was finishing the wiring. So far, the system seems to be working well.”

I hope to return some day to Neema and see it lit up by the generator funded by students on my campus, and eat dinner in the light. I miss my Neema family, but it is enough to know God is taking care of them. I keep praying for more opportunities to stay involved in their lives and ministry in Kenya. What a beautiful thing to be in God’s global church, his family of believers!

Read another story about students at Ohio State who promoted justice and Jesus with orange t-shirts.

If you recently returned from a cross-cultural experience and are facing re-entry issues, this resource may help you.