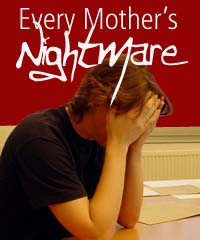 This seventeen-year-old son left a countryside town to attend college in the big city, where he indulged in all its sensual pleasures, took up living with a girl, got her pregnant and joined a cult. He could be a new student on campus. But we know him today as Saint Augustine, and he was every Christian mother’s nightmare.

At seventeen, he was definitely no saint. In A.D. 371, with a full scholarship in hand, “I went to Carthage, where I found myself in the midst of a hissing caldron of lust,” he later wrote in his famous Confessions. Carthage was the “Second City” of the declining and decadent Roman Empire, boasting its finest—and bawdiest—bathhouses and theaters. Away from small-town friends and family, Augustine reveled in the carnal delights of the big city. Though his mother had repeatedly warned him “not to commit fornication and above all not to seduce any man’s wife,” he “muddied the stream of friendship with the filth of lewdness and clouded its waters with hell’s black river of lust” (Confessions 2.5, 3.1).

A headstrong young man, ambitious and academically gifted, he rose quickly in his first year to the top of the school of rhetoric. Pleased by his “superior status, and swollen with conceit” (Confessions 3.3), he nevertheless distanced himself from the rowdy fraternities known as “The Wreckers.” Though he kept company with them, Augustine refused to join in their hazing and humiliation of new students, a practice not uncommon even in today’s universities.

Prayers for the Prodigal

For the next two years of his college career, Augustine settled into his literature and law studies in a determined search for truth. His somber mood may have resulted from the sudden death of his father Patricius. His mother Monica now took responsibility for his higher education. She supported him financially even though she strongly disapproved of her prodigal son’s lifestyle. Against her pleas and despite her prayers, at age nineteen Augustine took a concubine and had a son in A.D. 372. This was not an uncommon arrangement by Roman custom. Augustine would share his life with this unnamed woman exclusively and faithfully for the next fifteen years, and his son Adeodatus (“God’s gift”) would later be baptized alongside his father.

But Monica’s prayers began to have their effect. Augustine writes that age nineteen was “the age I had first begun to search in earnest for truth and wisdom and had promised myself that once I had found them would give up all the vain hopes and mad delusions which sustained my futile ambitions” (Confessions 6.11). His search for God had begun, though later in life he would say God had searched for him.

In his search, he was captivated by Cicero’s philosophy and works, especially the Hortensius. “It altered my outlook on life,” he wrote. “[It] provided me with new hopes and aspirations. All my empty dreams suddenly lost their charm and my heart began to throb with a bewildering passion for the wisdom of eternal truth” (Confessions 3.5).

Recalling his Christian upbringing, Augustine looked for answers to Cicero’s philosophical questions in a Latin Bible. To the expert rhetorician, however, the Scriptures seemed quite unworthy of comparison with the stately prose of Cicero. Turned off by the Christian faith’s apparent crudeness, Augustine looked elsewhere for an intellectually satisfying religion, one which promised enlightenment and elevation to the Wisdom of the Cosmos.

He found it in an Eastern cult. The Manichaeans, both powerful and popular in North Africa, preached a dualistic universe of Light versus Dark, with Good on one side and Evil on the other. Disciples, or “Hearers,” were to shun the things of earth and Dark, and ascend a ladder of knowledge toward the Light of Wisdom. An enthusiastic convert to this simplistic solution to the problem of evil, Augustine eagerly demolished lesser-skilled Christians when he got into religious debates.

At twenty-one, Augustine returned home to Thagaste with his concubine, his toddler and a heretical religion. His heartbroken mother considered him spiritually dead. She refused to share a house with him at first, and wept openly in prayer daily. She implored the local bishop, himself a former Manichaean, to talk sense into her wayward son. The bishop told her the boy would come around eventually through his own reading. Monica persisted with tears. Finally the bishop told her, “Leave me and go in peace. It cannot be that the son of these tears should be lost.”

But Augustine would remain lost for the next ten years. After teaching school in his hometown briefly, he went back to Carthage at twenty-two to become a rhetoric tutor. He wrote a book on the meaning of beauty, won a poetry prize, and made influential friends in academia. All the while Monica poured out her tears and offered “her heartblood in sacrifice” for her son.

Weary of Carthage, of teaching, and perhaps his mother’s influence, Augustine decided to mix with the literary crowd in Rome. At the docks on the day he was to depart, Monica begged him either to come home or to take her with him. Appearing to relent, Augustine told her to wait for him in a local shrine while he bade farewell to his friends who were leaving for Rome. But “during the night, secretly, I sailed away, leaving her alone to her tears and her prayers” (Confessions 5.8).

Rome disgusted Augustine. His pagan mentor Symmachus, hoping to increase his own influence, arranged for his protege to take a literature post in Milan, the seat of the emperor. It was also the home of Christianity’s most articulate apologist, Ambrose, who frequented the royal court. Impressed by the diminutive bishop’s eloquence and unequaled goodness, Augustine sought his tutelage.

Ambrose’s clear exposition of Scripture, his compelling purity of life, and his affirmation of Augustine’s potential turned the young man around. Monica arrived in Milan, ostensibly to take care of probate matters but probably to guide her son in his spiritual quest. Each week they attended church together, she to pray and he to listen to Ambrose.

Augustine abandoned his Manichaeism, but he was not quite ready to embrace the Christian faith. He struggled desperately with his divided will and the pain of his promiscuous past. He wanted to be pure—but not today. And yet he lamented, “How long shall I go on saying ‘tomorrow, tomorrow’? Why not now? Why not make an end of my ugly sins now?” (Confessions 8.12).

Driven by guilt and uncertainty, Augustine sought refuge in a garden, where he threw himself “down beneath a fig tree and gave way to the tears.” Soon he thought he heard a child singing, “Take it and read, take it and read.” Looking up but seeing no children nearby, he took the words as a divine command. He hurried to find his book of Paul’s epistles, opened it at random and read: “Not in reveling and drunkenness, not in lust and wantonness, not in quarrels and rivalries. Rather, arm yourselves with the Lord Jesus Christ.” He clapped the book shut, fully and finally convinced and converted. At once, “I told my mother, who was overjoyed.”

Thirty-three years of prayers and tears had not gone unanswered for a mother who did not give up on her hopes and dreams for a son—a son who, in his college days, had been her worst nightmare.