My car and me 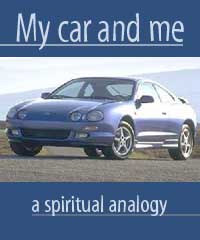 I drive an older Toyota Celica. I love it. I cannot go to a gas station or a shopping center parking lot without someone coming up to me and talking to me about my car. Stuff like, “I had one of those back in ’99” or “Wow, is that a Porsche?” (I’m not kidding) or “That was my dream car in high school” or “Love the Toyota, man!” Lately, I’ve been thinking how the state of my car is a lot like the state of my soul.

Externally, my car is a beauty! There are a couple dings and places where paint is peeling. But those just give it character. It fact, those are symbols of the battles that the car has been in. But other than those character-building scars the car looks great! I know that because of all the people who affirm my identity for driving the car. I feel “cooler” when I drive my car!

Now, the Celica has another persona on the inside. It’s old. It has 210,000 miles on the odometer. Things are not going well for the car. Some of those things could be repaired, but for a number of reasons I just let them go. Why? First, it runs okay without the repairs. Second, the repairs are costly. Third, compared to other cars on the road the Celica still looks pretty good on the outside. Fourth, I doubt if anyone will notice if I make the repair or not.

I’ve learned to work around the quirks in the car. Sometimes when someone is riding in the car with me I feel like I need to explain the problems to my new passenger. In reality, the passengers probably couldn’t care less, but because the car is so excellent on the outside, I feel the need to justify what is going on internally.

Well first, the transmission is going. It’s an automatic, and has lost the transitional gear so I’ve had to figure out a way to go between first and third. I have adjusted my driving style so that I don’t need to use second gear. In order to restore the middle gear, the transmission would need major surgery. The car is probably worth it, but I just don’t have the money to do it.

Next, the car takes a long time to start. It has to warm up quite a while before the engine will idle on its own. The best Toyota repair guy in town can’t trim the idle correctly. When I asked him about it he said in his best broken English, “Your car is old, leave foot on gas pedal, $200 dollars.”

Also, the sunroof is broken. Not only doesn’t it open, but after a hard rain, it leaks a waterfall the first time I put on the brakes. It often surprises me because I forget about it between rainstorms. It surprises passengers who sit in the wet seat, too.

There are a number of other issues, and new problems are popping up everyday.

So how does this relate to my spiritual life? Well, I became a Christian in March 1972. It was a pretty radical transformation. I mean I went from going in one direction, very satisfied, to going in the complete opposite direction with several major improvements. I immediately stopped cussing and began to have compassion for people that I previously didn’t like at all.

So I learned all the good things to do as a young believer: read the Bible, pray, memorize scripture, go to church, be discipled and disciple others, keep a journal, etc. And I was good! I advanced through the ranks of the Christian community and was deemed a Christian leader at a young age. I was on committees, led Bible studies, led Young Life clubs, helped start a church, shared my faith with non-believers and did all the “right things.” Externally I looked like a very nice Toyota Celica! People commented on my faith and my deeds done. And I felt “cool.”

Sure there were a few dings and rough edges, but those just added to my character. They were like battle scars.

Internally, there were a few things that were not going well for my spiritual life.

Well, first, I do well in the Bible reading and Bible study areas. It’s a huge priority and I teach others how to do it, but my conversations with God are weak at best. It’s like trying to live spiritually without second gear. Second, I do well when I get started in the morning, but my “idle” has more to do with output than intake. In other words, my “soul time” is frequently more connected to the ministry work I do than to my personal life. I read and study so that I have something to offer students. Third, I leak, like the sunroof. I don’t retain the spiritual nurture that I receive like a good rain. It goes in one part of my life and out another without ever staying around long enough to make a difference.

I’ve made a repair plan for this coming year. I’m going to begin the costly repairs that will help get my soul in better shape. The Celica will have to wait.

—Marty Purks blogs at The Fig Tree & A Vine.