My white identity: a multiethnic journey 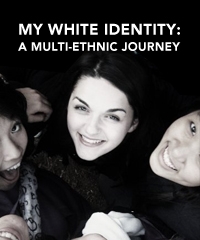 Culture shock. That’s what I experienced as a freshman at an urban, diverse university. Suddenly I was surrounded by different ethnicities and cultures — a drastic contrast to my small-town, white upbringing. It was unfamiliar and uncomfortable, and I reacted in fear, alienation, and apathy. The more my InterVarsity group talked about racial reconciliation, the more my heart hardened. I knew I had a problem.

Twenty years ago I was born in Jerseyville, Illinois, a town of approximately 8,000 people — 98.8 percent are white. I was one of those people. Despite its quaint size, Jerseyville is fun place to live, a loving and charming community, safe and familiar. It was all I ever knew until I received a full tuition scholarship to a university in downtown Chicago.

Chicago, Illinois has a population of 2,896,016 people — 42 percent are white. At first, I did not expect the diversity to challenge me, but I was wrong. All around me, people took pride in their ethnicity. When my peers would ask about mine, I did not know how to answer them. Is being white my ethnicity? What is my culture? Who are my ancestors? What is my heritage? Does it matter? What do these questions even mean? I had never thought about these things before. I had been submersed in a community where people looked, acted and thought like me. Now I was surrounded by people who had different heritages and cultural characteristics. I was quickly overwhelmed.

The cultural shock that I experienced manifested itself in a variety of ways. At first, I was afraid. I approached multiethnicity with fear because it was completely unfamiliar to me. Then I became judgmental. I subconsciously projected my stereotypes about different ethnicities onto those specific ethnic groups. I should have prayed that God would turn my fear of this diverse culture into love. However, I did not pray, and my fear turned into alienation. I congregated with people that I easily identified with, sometimes without even meaning to. This exclusivity in my habits resulted in apathy. I just didn’t care about getting to know people who were ethnically different from me.

As a freshman, I was heavily involved with InterVarsity, which highly values multiethnicity and pursuing racial reconciliation. Yet whenever my chapter talked about these issues, I shut down. I did not feel they pertained to me. In my mind, it was a waste of time to talk and pray about this.

One night, our InterVarsity staff worker led a discussion on multiethnicity. Although I do not remember much of what was said, I do remember the conviction I felt about my attitude. I simply did not care about multiethnicity or racial justice. I was indifferent. I realized that night that the apathy that took root in my heart was wrong.

During winter break at home, I became more convicted and disappointed in myself. I was dreading going back to Chicago and its multiethnic environment. It was still unfamiliar to me — and I was afraid. Again, the conviction pressed on my heart. I finally decided to talk to someone I trusted, my mother. With openness and honesty, I explained to her the fear and apathy I had been experiencing.

“Carolyn,” she said firmly when I finished talking. “You are wrong.”

“I know,” I agreed. “I just don’t know what to do now that I’ve realized this about myself.”

She said simply, “We have to pray with faith.” Then she closed her eyes and led me in prayer about these issues I had been struggling with. I confessed to God that my heart had been hardened and asked to be changed.

The transformation did not happen overnight. Layer by layer, God began to transform my heart. I began to feel completely welcomed being in a multiethnic environment. I suddenly found that the people closest to me came from all different ethnicities and cultures. In addition, I began to see the desperate need for racial reconciliation in the city of Chicago and on my campus. One moment stands out to me above all others.

It happened during an InterVarsity large-group meeting. The seniors were standing in the front of the room and the rest of the chapter gathered around them to pray. As prayers were lifted up, I opened my eyes and looked at all the people. They were from different ethnicities, cultures and backgrounds, all intermingled, leaning on each other and crying out prayers to our Lord. We were all unified and God was glorified. Tears overtook my eyes because, at that moment, I saw beauty in diversity.

It’s a year and a half later and I am learning every day about people whose cultures are different from my own. Our Multiethnic InterVarsity chapter has also embraced our multi-ethnic identity and the challenges that it brings. Although our group is fairly diverse, it is predominantly white, and also carries a predominantly white culture.

This year we have made it a point to create space in our community for other ethnicities and cultures to find their place for expression. We did this simply by asking people what would make them feel welcome and having open dialogue about issues surrounding ethnic and cultural identity.

Last semester we invited a guest speaker who talked to us about multi-ethnicity in God’s kingdom. We heard how he learned from other cultures to embrace new ways of encountering and worshipping God. Our chapter engaged in open and honest discussion on the role and importance of multiethnicity, and this discussion has been ongoing in our community. Overall, we are gaining awareness of these issues, but there is still room for improvement and growth.

I’m grateful that the Lord changed my heart when I was a freshman. Now I understand some of the deeper issues of racial reconciliation and how hard it can be. I want to play an active role in building our multiethnic community of Christ-followers on campus. When the Body of Christ shows unity in diversity, it is beautiful — and nothing short of powerful!

Here’s how Jade, a black student at a mostly white university, struggled with racial and cultural differences and deepened her relationship with Jesus: My black identity: a multiethnic journey.