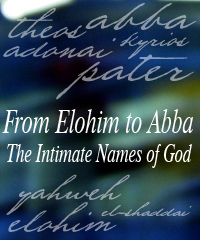 Students long for community and intimacy. And they have little interest in a lofty, distant God. Yet if you ask students about God, most admit to thinking of God as largely unknowable, uncaring, angry or distant. Those of us who long to bring students to faith in Christ often wonder just how we can best present God as he really is. Understanding the names of God — expressions of his nature as found in the Bible — can help.

There are many ways we could portray God in order to get people to like him. We could portray God as a faithful companion and a true friend. We could emphasize Bible texts showing that God could be one’s Best Buddy. We could choose worship songs that make us think of God as warm and fuzzy, close and cuddly.

But we must not create a God in our own image, or in the image desired by the people around us. Instead, it is essential to present God as he revealed himself in scripture, whether our listeners want that kind of God or not. After all, as God told Moses, “I am who I am.”

So how should we portray God? The Bible is our authoritative source for knowing God as he is. Does the Bible truly portray a God who desires intimacy or is this an inappropriate question to ask?

The study of God’s revelation of himself is rich with a variety of names of God. Let’s take a look at the main ones in both Testaments. (Although God’s nature encompasses the fullness of both the masculine and feminine, the Bible tends to use more masculine allusions to reveal God’s person. This is true of his biblical names as well. For the purposes of this article I’ll use masculine pronouns.)

Elohim (translated “God” in English) is the Hebrew name used for God in the very first line of the Bible. Elohim existed already and he created everything else. Elohim is a plural noun that can also refer to the various gods or the human authorities of the nations. The Bible, however, uses this noun to refer to the one true God.

Kings and queens might use the “royal We” to speak of themselves in the plural of majesty. Biblical authors likewise spoke of the one true God in the plural form to show his elevated status above all people and above all so-called gods. Some would even argue that God inspired the biblical writers to use this plural name as an early hint that later he would more fully reveal the fact that he is a Trinity, one God in three Persons.

Elohim designates God as Majestic Ruler over all.

The word El may or may not originally be related to the word Elohim. In the Old Testament, this name emphasizes the power and sovereignty of God. It is often expanded as El-Shaddai, translated “God Almighty.” This is the name God gives to himself in his covenant relationship with Abraham:

When Abraham was ninety-nine years old, the LORD appeared to him and said, “I am God Almighty El-Shaddai; walk before me and be blameless. I will confirm my covenant between me and you and will greatly increase your numbers" (Genesis 17:1-2, NIV).

Despite all obstacles, El-Shaddai was mighty and accomplished his promises to Abraham. God’s ultimate promise, that “all the peoples on earth will be blessed through you” (Genesis 12:3) is accomplished through Abraham’s descendant Jesus.

The most personal name that God gives himself in the Old Testament is Yahweh. Hebrew was originally written as consonants with no vowels and this name appears as the equivalent of YHWH. As vowels were inserted and it was passed down through other languages to English, it evolved into the word Jehovah. The word Yahweh, however, is an attempt to more closely represent the original Hebrew. As the Jewish tradition of never pronouncing this personal name of God developed, the word Adonai (“Lord”) began to be read in its place at public readings of the scriptures. This tradition continues today in most English translations, where Yahweh is translated as “LORD” (with the first letter capitalized and the rest in small caps).

Yahweh is the name that God emphasizes in his covenant with Moses and the Israelite people. God tells Moses, “I am the LORD Yahweh. I appeared to Abraham, to Isaac and to Jacob as God Almighty El-Shaddai, but by my name the LORD Yahweh I did not make myself known to them” (Exodus 6:3). The name Yahweh may or may not have been known earlier than Moses, but here God points out that in his earlier covenant, the Patriarchs related to the one true God known by the title of God Almighty. This covenant with Moses and the Israelites involves a closer relationship with his people than before. Yahweh now begins to dwell among and accompany his people as they travel and as they later conquer and settle in the Promised Land.

Yahweh is the name God uses when he comes to dwell among his people.

God is also called Adonai. This name can be used for a person whom one would address as “my lord,” but it is a frequent Old Testament name for God. This name, when applied to God, means that God is Master or Owner. Adonai is translated “Lord” (only the “L” is capitalized) in English and emphasizes the fact that God is in charge of his creation and his people. Isaiah uses this term when he says, “I saw the Lord (_Adonai_) seated on a throne” (Isaiah 6:1). Following the tradition of not pronouncing God’s personal name out loud, Adonai became an equivalent term for Yahweh.

Well before the time of Jesus, the Old Testament was translated into Greek, a widespread international language of the time. The translators of this work, called the Septuagint, chose the Greek word Theos (God) to translate Elohim and El, and Kyrios (Lord) to translate both Adonai and Yahweh.

This usage was carried on in the New Testament (originally written in Greek), where Theos was used as a general word for God, and Kyrios was a more personal name designating God as the personal Lord of all. Old Testament quotations in the Greek New Testament followed the Septuagint’s use of Theos and Kyrios.

This tradition lives on in English in most Old Testament translations, where the words Adonai and Yahweh are translated by the same word, distinguished only by capitalization: “the Lord” and “the LORD,” respectively. Other words for God (_Elohim_, El, etc.) are simply translated “God.”

Greek became a more and more widely used language even among the Jews before the time of Jesus. The Septuagint became so influential that the two different Hebrew words Yahweh and Adonai came to be considered equivalent. When used as a proper noun, Kyrios in Greek meant the same thing as Yahweh in Hebrew. Kyrios (the Lord) carried the connotation of God’s personal name. So, although it continued to be used as a title of respect for people, Jews considered it a weighty word. “My lord” could be a polite name for a human person, but there was only one Person who could be called “the Lord.”

This is the context in which Jesus’ first disciples wrestled to understand just who he was. In the Septuagint and in the New Testament God is called both Theos and Kyrios (Lord). It is particularly striking, then, that Jesus is also called “the Lord.” Romans 14:6, for example, speaks of both “the Lord” (_Kyrios_, referring to Jesus) and “God” (_Theos_). In this one verse (as in other places), Jesus and God the Father are spoken of separately but in relatively equivalent terms. It seems that the New Testament writers had already developed a rather elevated view of Jesus by the time it was written. They somehow already understood that Jesus was God himself.

In Jesus, our Lord, God becomes human and gives himself to save his people.

The Old Testament describes God as the Father of his people in several places (see Deuteronomy 32:6, Isaiah 63:16, 64:8, etc.), but Jesus promotes this name of God to a much greater degree. He considers God his own Father (_Pater_ in Greek, the New Testament’s original language) and the Father of his disciples (whom he instructs to pray to “Our Father”) as well. God continues to be called Father throughout the New Testament.

Recent scholarship has shown that, although the New Testament was written in Greek, the main language that Jesus and his disciples spoke was undoubtedly Aramaic, an ancient regional language. The Aramaic word Abba appears three times in the New Testament (Mark 14:36, Romans 8:15, Galatians 4:6) and each time it is immediately translated as Pater for readers unfamiliar with Aramaic. It seems that when Jesus spoke of God as Father in Aramaic, he used the term Abba. It is particularly remarkable, then, that Abba is an intimate word for father. It indicates some of the very first syllables a baby might pronounce in reference to his father — something like Daddy or Papa, but even more like Dada.

God, the Father of Jesus and his disciples, is Dada.

What is God up to?

Biblical history is, among other things, the story of the almighty, infinite, eternal, holy, transcendent God initiating and developing an increasingly intimate relationship with his people. This is what he did with Abraham and with the descendants of Jacob. This is what he did and is doing with the disciples of Jesus. This is what he wants to do with us as his disciples today. This is also what awaits us when we go to live with our Dada forever (John 14:3, 1 Corinthians 13:12).

If you are discontent with relating to God from a distance and long to know God more intimately, consider that the Bible clearly teaches us that this is just what God desires as well. Let us seek the intimacy with God that he also desires.

If God is drawing people to himself and becoming Dada to them, let us not shrink from presenting him in this way. One reason the gospel of Jesus Christ is Good News is that the transcendent God of the universe has come to seek us out in Jesus and wants to adopt us to live in close harmony with him. Let us make this known boldly.

Improve your intimacy with God by learning to listen. Here are suggestions on how to Pray Without Talking from the blog of InterVarsity.

When Lisa’s spiritual life was stuck, she knew she needed a new Direction for Life. Find out how spiritual disciplines set her free.