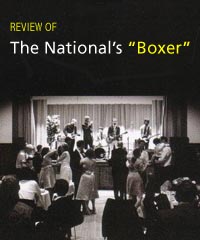 The latest album by The National has me imagining a “Do Not Enter” sign painted by Monet — mysterious and beautiful, but also a warning to be heeded. The songs are uniformly quiet and thoughtful, but a steady driving pulse (courtesy of drummer Bryan Devendorf) never lets the energy die completely. The lyrical themes, couched in lead singer Matt Berninger’s poetic style, remind me of the Teacher in Ecclesiastes. He’s tried it all — love, money, parties, friends — and ultimately it is all meaningless. It’s a harsh lesson, but a sweet coating of lush music helps it go down easier.

I’m not sure I’ve ever heard a rock album that kept the tone so consistently soft for all 12 tracks. Not once in Boxer‘s 43 minutes do they cut loose from the somnolent mood, sticking to a tightly crafted sound based on interwoven piano, guitar and drums. Brothers Bryce and Aaron Dessner, along with Scott Devendorf (brother of the drummer), produce a delicate curtain of music, in front of which hang Bryan Devendorf’s insistent drumming and Berninger’s haunting baritone.The result is that the album feels amazingly cohesive, almost like one long subtly changing song.

The lyrics, too, revolve and repeat around consistent themes: loss, growing up, getting older, working. One line from “Mistaken For Strangers” sums up a lot of the album: “another uninnocent, elegant fall into the unmagnificent lives of adults.” Berninger bemoans the loss of youthful energy in lines like: “We miss being ruffians, going wild and bright/in the corners of front yards/getting in and out of cars/we miss being deviants” (“Guest Room”). In its place is a bland adulthood full of loneliness (“Falling out of touch with all my/friends are somewhere getting wasted” from “Green Gloves”) and empty pursuits (“Make up something to believe in your heart of hearts/so you have something to wear on your sleeve of sleeves” from “Fake Empire”). For Berninger, it would seem, adulthood is just youth with the color drained out — you have the same problems, but none of the exuberance and fun that used to make them bearable.

So, beyond the simple audio pleasure of listening to this album, why would anyone be interested in such a downer? Well, going back to Ecclesiastes, I would say that understanding the negative image can give us a fuller and more nuanced understanding of the positive. The point of Ecclesiastes is not to convince us that life is terrible; it is to convince us that life would be terrible without God. Now I’m not claiming that the National has that same object in mind — just that it’s a way to listen to what they are saying. When Berninger sings “I made a mistake in my life today /everything I love gets lost in drawers / I want to start over, I want to be winning / way out of sync from the beginning”, he is putting into song what too many people feel without the assurance of grace and meaning that come from faith in Christ.

I could understand people steering clear of Boxer based on its depressing lyrics (and a few instances of strong language), but for myself, I love it. Maybe it’s because I am an unashamed Ecclesiastes fan, but for me, examining and understanding the bad side of things is an integral part of my faith. And I’ve never heard it done more beautifully than on Boxer.