Do I need to tell someone that I've sinned against them? 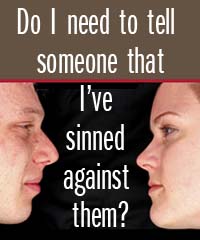 Suppose I sin against another person. Should I confess my sin to that person as well as to God? Does God require me to do so? If the person knows you have sinned against them, then the answer to this is fairly simple: yes, you should confess your sin and ask for forgiveness. But what if the person doesn’t know you are the one who has sinned against them?

“It should be the exception rather than the rule that you wouldn’t tell a person you’ve sinned against them,” says Valerie Gladu, who works to develop multiethnic fellowships in the greater Washington, DC, area. “To hold this kind of thing in is an impediment to worship. And not only is unresolved sin a hindrance to your relationship with God, it’s also a hindrance to your relationship with your friend. To ask for forgiveness from God, but not from the person is to suggest that they are immaterial to the problem and don’t matter.”

But people do matter. Even if a person doesn’t know about our sin, they may have to deal with the consequences of what we’ve unleashed. “Okay,” you may think, “I blew it but I don’t want to wreck the relationship.” Sometimes that’s true, if the consequences are minimal and the cost would be the destruction of the relationship. But often, we tend to decide not to confess because of the harm to our own image. “Fear of rejection and embarrassment are poor reasons to avoid confessing,” says Valerie.

Why is this so hard?

Pete Luisi-Mills, who has spent the last couple of year developing global friendships via the Peace Corps, says, “Often the hardest part of seeking forgiveness is not admitting that we’ve done wrong; it’s the attendant embarrassment of vocalizing our sin before another human being. Like Adam and Eve hiding from God in the garden, we are suddenly very naked before this person we have wronged. The carefully wrought image we have worked hard to present is in danger of cracking.”

But isn’t relationship more important than truth? Many think so, but this assumes that truth is always damaging. Truth may hurt, but truth also set us free. Do we assume that the other person can’t sense that something has happened? Do we kid ourselves that we won’t be affected by our guilt? Both parties in a relationship can sense the tension in the air. “Of course,” adds Pete, “the guiding principle must be, as always, ‘love thy neighbor as thyself.’ Will it cause our brother or sister more pain if we confess to them? If the sin was committed only in our heart, and the person would be truly dismayed and hurt by knowledge of it, then I would say no, do not tell them. In that case, it seems that the point in telling would be to make ourselves feel better, to relieve ourselves of a burden, without regard to what it will do to the person we tell.”

Looking deeper into ourselves

Beyond our struggle with admitting our sin and confessing it to the one we’ve hurt, why do we sin against each other in the first place? Judy Johnson, director of staff assessment and training with InterVarsity, suggests that we look deeper. “The sin we commit may be the tip of the iceberg. It helps to look deeper than the action or thought. Is there jealousy involved? Arrogance? A need be one up on this person or to retaliate for something? Our sin behavior often needs the forgiveness of the person, but even more so, we need to invite God to transform our character. The bigger picture includes working through what hinders this relationship with the person. In other words, what caused you to sin against them in the first place?”

Judy offers an example: “Say I really enjoy leading worship. I hear that Kristen, a new member of our fellowship, is a great worship leader. At a planning meeting, someone suggests that we use her to help lead worship next week. I feel threatened (whether I’m in touch with that feeling or not) and give several reasons why we shouldn’t ask her — she’s too new, she doesn’t lead with enough diversity of style, I don’t think she has enough leadership presence to lead this size of a group and so on. So the group decides to put off asking her. Even if all of those reasons I give are true, I have chosen to block the use of her gifts rather than help develop them.

“Now, I could suggest that because Kristen is new, I invite her into next week’s worship planning and offer her a role in leading part of the worship. When I ask myself what caused me to block Kristen, I realize the reasons I gave at the planning meeting aren’t strong reasons at all, but only excuses. My real reason is feeling threatened by someone who might be better than I am, and I might not get to lead as much in the future. Facing my sin and working on the root cause in this case may mean going back to the leadership group and saying, ‘I spoke too quickly and reacted to a sense of threat to my role, when actually it would be great to start involving new people in this role.’ It could mean going to Kirsten and saying, ‘I work with the worship at large group and hear you are a great leader, would you like to meet with our team next week to get a feel for what we do and see if you might want to get involved?’

“Being transparent about our sin is humbling. That’s why I’d rather give reasons for not confessing to others or, if confronted by someone, for rationalizing what I’ve said or done. Ultimately, to acknowledge our sin is to throw ourselves at God’s mercy. ‘For what I want to do I do not do, but what I hate I do… . For I have the desire to do what is good, but I cannot carry it out’ (Romans 7:15-18). Only humbling myself before God and letting the Spirit transform me gives the power to admit who I am, ask forgiveness and allow God to change me.”

Hold the detail and drama

When you do confess, don’t overdo the detail, and try to avoid being over-dramatic. “Don’t be an exhibitionist in your confession,” says Valerie. “Be straightforward and simple: ‘The Lord has been convicting me to confess something to you. Would you forgive me for ———?’ They may or may not forgive you, but you can’t control that. You have confessed, and you’ve given them the opportunity to forgive you.”

If you find yourself on the receiving end of a confession, don’t beg for details, and don’t withhold your forgiveness. Agree that what the person did was wrong, and then offer them release: “I forgive you, (person’s name).” They need that release and so do you.

Caring for my Jeep and other created things
Thoughts about a red Jeep, the environment and God
Login