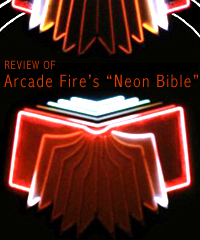 Though not a “Christian” band, Montreal collective Arcade Fire has made one of the most spiritually interesting albums in years. Neon Bible, their sophomore effort, is a rich banquet, both sonically and thematically.

Arcade Fire’s debut album Funeral (fall 2004), stunned listeners and sent music critics scrambling for their thesauri in search of superlatives. Dark and spooky while at the same time warm and oddly comforting, Funeral was a driving, desperate requiem for youthful naivete and unspoiled romantic idealism. “Neighborhood #1 (Tunnels)” is simply the best track I’ve heard in the past three years; its message made my eyes well up while its sheer headlong energy made me want to run a mile.

I’m not sure what I expected from them as a follow-up, but it wasn’t the portentous Neon Bible. That’s not to say they’ve lost their musical energy; even the drearier tracks (the chugging “Black Mirror”, for example) are infectious. Still, less charitable reviewers have called this album a downer. Admittedly, they have a point: one song describes a relationship broken by “an ocean of violence,” while another bitterly predicts “every spark of friendship and love will die without a home.” Hugs, anyone?

I wondered if perhaps the band was working on an album cycle that would chart the emotional growth of an individual. If Funeral represented the exuberant first bloom of youthful hope, then perhaps Neon Bible describes the angst and cynicism that often takes hold a little later. Over eleven tracks, the Arcade Fire cast a jaundiced eye on the church, the media, and America in general—indeed, the lines between those three subjects are intentionally blurred, discomfiting the listener with a sense that a single vague menace lurks behind all three. Lead member Win Butler sounds like a old testament prophet — like Ezekiel, he’s been shown some detestable things, to be revealed with relish over the course of the album.

Evangelistic fervor, of any strain, is a dicey proposition for a rock band: you risk alienating your fans and generally looking ridiculous. As I listened to the thunderous church organ at the start of “Intervention” and scanned the lyrics I confess I felt a sinking sensation. Bono not withstanding, few things are more insufferable than a sermonizing pop star. Who wants to be chided and preached at after dropping $15 on a new album? (an album I bought, not downloaded, thank you very much). As Arcade Fire took the pulpit, however, I was pleasantly surprised. Yes, they deliver a scathing broadside against the Church, which they consider to be broken at best, pernicious and vampiric at worst. And yes, they occasionally go over the top lyrically (“working for the Church while your life falls apart / Singin’ hallelujah with the fear in your heart”). But they do it with such open-hearted fervor, their voices so full of passion and pain, I couldn’t help but be mesmerized.

The album’s anger isn’t limited to the Church by any means. On songs such as “Black Wave/Bad Vibrations”, “Windowsill” and the rollicking “Antichrist Television Blues” they unleash broadsides against Western materialism and American culture in general. All right, not exactly original topics, but look closer—beneath the familiar themes there’s a deeper dissatisfaction with the prevailing spiritual vacuity. This is particularly true on “Antichrist Television Blues,” in which America’s golden calf (media stardom) is skewered beautifully: a father for whom religion and media have become hopelessly conflated begs God to make a star out of his 13-year-old daughter so that “the world will see what His true word means.” Listening to his raving, I wasn’t sure if he was praying to Jesus Christ or Rupert Murdoch.

For me, “The Well And The Lighthouse” is really the spiritual heart of the album. This song is a bit bonkers, but in a good way. It’s essentially the bridge diagram obliquely reimagined as a gonzo mini-epic: a wayward soul, seduced and dragged into a pit of despair, mocked by the devil, cries out for salvation and finds himself ascended to “heaven” (in this case a magical lighthouse). I hesitate to indulge in too much lyrical exegesis, but dig this line: “Resurrected, living in a lighthouse, if you leave them ships are gonna wreck; the lions and the lambs ain’t sleeping yet.” The rescued is imploring his rescuer to repeat this unwarranted act of compassion — all humanity is in the same situation. We may debate the role of human free will in salvation, but for the Arcade Fire it’s a no-brainer: we’ve sunk ourselves through selfishness and greed, and the only possible way out is divine intervention. Of course, such salvation is as illogical to the band as it is to a believer — the hapless sinner’s path to destruction is clearly outlined in the song, but his salvation is a complete mystery. God’s mercy is abundant, undeserved, and above all utterly inexplicable. The longing for heaven is equally apparent on the exuberant and childlike “No Cars Go” and the confessional “My Body Is A Cage”. The latter conjures images of contrite penitents testifying before a congregation, with a swaying choir in the background.

Musically, the album is a real barn-burner, with church organs, harps, and gospel choirs being added to Arcade Fire’s already eclectic musical palette. They don’t fit neatly into any musical genre (other than the less-than-helpful catch-all “indie rock”) — it sounds a bit of a cop-out, I know, but the only band they sound like is themselves. It’s not that they haven’t been influenced by others; quite the contrary. Like Beck or the Fiery Furnaces, they seem to have been influenced by everything — Phil Spector, Motown, the Velvet Underground, folk music, literature, and philosophy. When I try to describe their sound, I feel like I’m talking about a wine or a really great hamburger: it’s big, bold, and juicy. It has the ferocity of punk, the squelch of funk, and a left-field sensibility that says, “Hey, what this song really needs is a balalaika!” It’s music that disdains timidity and eschews hip postmodern irony. It’s outre and hummable at the same time.

So there it is: a musically magnificent, unapologetically sincere work of art, and the coolest uncool album since The Joshua Tree.