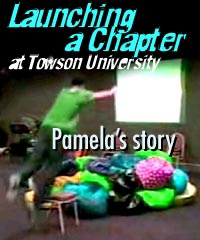 Getting involved in the InterVarsity group at Towson University (MD) has shown me unity in diversity. I come from a Catholic family, and I was worried about joining a non-denominational group since I’ve had bad experiences in the past with such groups. However, I felt God nudge me on the shoulder to be part of this group, so I gave it a shot.

Honestly, I wasn’t expecting much from InterVarsity. In my mind, I was the minority religion and thought nobody would be able to relate to me. I thought they were going to be the stereotypical “Jesus Freaks.” Yeah, I had a pretty gruesome, judgmental, and pessimistic view of what it was going to be like.

But, through all that, God has molded me, transformed me, and worked in me. Over the span of about six months I came to glorify him for surrounding me with these people, with this community, and with this family. Not only do my InterVarsity brothers and sisters accept me for my religion, but they relate to me in ways I never would have imagined.

It is still hard for me to completely fathom that next semester I will be living off-campus with three of these women I used to be suspicious of. They are my sisters in Christ and that will never change. God is amazing. Through InterVarsity, Christ has eradicated many of my previous concerns. New ones have arisen, but they are optimistic ones.

InterVarsity has reduced my former anxieties and has strengthened my own Catholic faith. InterVarsity has drawn me closer to our Savior and I am a better follower of Christ because of his works in InterVarsity. Now I am, in the sense of a devoted follower, a “Jesus Freak” on my campus.