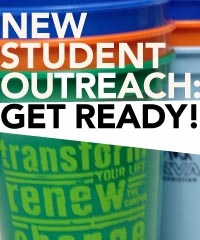 When hordes of new students arrive on your campus in the fall, will your InterVarsity group be ready to welcome them with the love of Jesus? Here are some ideas to reach out and care for the new students at your school — freshmen, transfer students, international students — all looking for new friends, experiences and opportunities. Embrace them into your community.

Cookies from “home” (your new one)
Nothing says “Welcome” better than home-baked cookies. At Wellesley College (MA), twenty-two women in the chapter gathered one night to bag cookies for all of the incoming first-years. The cookies had been baked by many volunteers from the local community, involving eight churches. Attached to each bag was an information flier about the chapter, including a group photo of some of the members. More than 100 dozen cookies were distributed to the mailboxes of first-years by the InterVarsity group.

Sex and pizza
The first big NSO event hosted in the dorms by InterVarsity students at the University of Washington was advertised as “Sex and Pizza.” They gave out free pizza and created a forum for people to talk about how sex and religion had intersected in their lives, either positively or negatively. The honest dialog and gracious listening was very well-received among the 120 students who attended. The chapter has been focusing on how to love and serve the campus through tangible activities. They printed the chapter’s vision statement on T-shirts: InterVarsity: serve the campus and change the world. Read more about “Sex and Pizza.”

Wall o’ Spirituality
Sometimes even close friends are uncomfortable discussing God, so the InterVarsity chapter at York College of Pennsylvania decided to set an early precedent for public conversation about God. They built a “Wall o’

Spirituality” that generated campus-wide conversations about Jesus. As students walked to their first classes of the year, they were given a chance to express their spiritual beliefs with spray paint and a giant canvas. Chapter members were there to listen to the artists explain their creative work. They met about 60 students through this event and invited them to the first large-group meeting that week. The group also handed out water bottles to grateful freshman and their families on a very hot move-in day. The Dean of Student Affairs stopped by their water table, thanking them for emulating Jesus and meeting practical needs.

Multiplying pulled pork
When an estimated 150 students showed up for the free barbeque during the first week of school, the students who planned the event wondered how they would feed everybody. No, Jesus didn’t multiply the pulled pork when they ran out, but he did bring several new people into the InterVarsity chapter at the University of Illinois-Champaign. The barbeque had an evangelistic tone. They put up an “Interactive Zone” on the theme of soul hunger. Visitors could interact with these displays that pointed out what people often use to satisfy personal longings but often lead to more emptiness instead, such as sex, food, alcohol or money. Then participants were asked to consider Jesus’ claim when he said, “I am the bread of life. He who comes to me will never go hungry, and he who believes in me will never be thirsty” (John 6:35).

Being there
It was only free ice cream outside one of the dorms at UNC-Wilmington, but the Lord was clearly moving. There were 37 students who signed up for a small group. Many new students were seeking out InterVarsity because they wanted to be involved in a Christian fellowship. Then there were the rest of the students — those who would never come to a Christian meeting — who were there eating ice cream and chatting with chapter members. “We want all students to expand their vision of who God is,” said staff member Matt Sidell. “It’s amazing that the Lord can use the same event for those seeking Christian fellowship as well as those who don’t yet know about him.”

The purpose-driven Interactive Survey
“What are you here for, anyway?” For three days, InterVarsity students set up an interactive survey with this curious question in the campus center of Wellesley College (MA).

There were many positive responses from people who said the survey questions were good to think about. Others asked when the next interactive survey would be. Many of the InterVarsity students grew in boldness by asking others to participate. It was an opportunity to share their faith in new ways.

International Student Ministries: don’t forget the kids!
At South Dakota State University, many graduate and international student families stay on campus for the summer. So, a week before the fall semester started, the International Student Ministries chapter, with lots of help from the undergrad chapter, held a Kid’s Carnival to reach out to these families. They received permission from the university to hold the carnival near the playground of the on-campus Family Student Housing, and the residence director of the housing offered to pass around flyers announcing the carnival. Many of the games and activities were borrowed from local churches, such as a beanbag toss, ring toss, duck pond, putt-putt, bowling and face-painting. If the kids won a game, they were given tickets to redeem for small prizes. One mother from Egypt commented that the carnival felt just like common events in her home country that she’s missed since being in the United States. Several families came who had never been involved before, and it allowed the chapter to show that they cared for the whole family, not just the students at the university.

Doing the follow-up: Knock, knock … who’s there?
After a full week of activities meeting new students, there was a huge stack of hundreds of contact cards piled in front of the leaders of the six undergrad chapters at the University of Illinois at Urbana-Champaign. Contacting each student personally in the following days was a daunting challenge, but they had a system to separate out the cards for each chapter and geographically by housing.

When Ginny Crabb was a leader in the dorm ministry, she knew the importance of a personal response for each card. On her follow-up team, there were some people who were afraid to knock on doors. She told them, “This is not a card; it’s a person. Someone made the effort to fill out this card and it’s an invitation for you to knock on their door, welcome them to campus, and tell them about InterVarsity. You have no idea what God is going to do in their lives in the next four years. Remember, you’re involved in the chapter today because someone invited you to an InterVarsity event.”